Even though I’m an HDTV fanatic, it wasn’t until this past weekend that I finally made the jump to an HD monitor. While I don’t have HDTV tuners on my Media Center, I do have an HD camcorder and it was important for me to be able to edit my high resolution videos.

After doing a little bit of research, I decided to pick up a SyncMasterTM 226BW from Samsung. Between the new monitor and my ATI Radeon HD 2600 XT video card, the resolution looks absolutely stunning. Even my home movies look fantastic in HDTV. I really couldn’t have been happier with the upgrade.

Unfortunately, Hollywood isn’t quite as thrilled about my new HD Media Dream Machine and they’ve decided to punish me by revoking my Watch Now privileges from Netflix (NFLX).

I first found out about the problem on New Year’s Eve, when I went to log into my account. When I tried to launch a streaming movie, I was greeted with an error message asking me to “reset” my DRM. Luckily, Netflix’s help page on the topic included a link to a DRM reset utility, but when I went to install the program, I stopped dead in my tracks when I saw this warning. 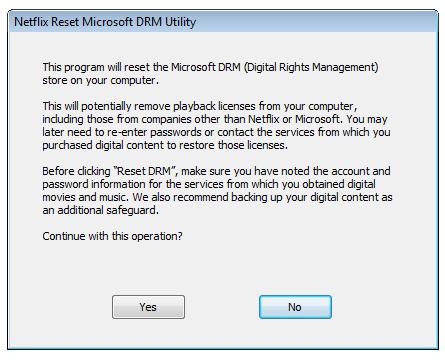 The minute I saw“this will potentially remove playback licenses from your computer, including those from companies other than Netflix or Microsoft” (MSFT) I knew better than to hit continue. Before nuking my entire digital library, I decided to call Netflix’s technical support, to see if I could get to the bottom of my C00D11B1 error message.

When I called them they confirmed my worst fears. In order to access the Watch Now service, I had to give Microsoft’s DRM sniffing program access to all of the files on my hard drive. If the software found any non-Netflix video files, it would revoke my rights to the content and invalidate the DRM. This means that I would lose all the movies that I’ve purchased from Amazon’s (AMZN) Unbox, just to troubleshoot the issue.

Technically, there is a way to back up the licenses before doing a DRM reset, but it’s a pretty complex process, even by my standards. When I asked Netflix for more details, they referred me to Amazon for assistance.

Perhaps even worse than having to choose between having access to Netflix or giving up my Unbox movies was the realization that my real problems were actually tied to the shiny new monitor that I’ve already grown fond of.

Netflix’s software allows them to look at the video card, cables and the monitor that you are using and when they checked mine out, it was apparently a little too high def to pass their DRM filters. Because my computer allows me to send an unrestricted HDTV feed to my monitor, Hollywood has decided to revoke my ability to stream 480 resolution video files from Netflix. In order to fix my problem, Netflix recommended that I downgrade to a lower res VGA setup.

As part of their agreement with Hollywood, Netflix uses a program called COPP (Certified Output Protection Protocol). COPP is made by Microsoft and the protocol restricts how you are able to transfer digital files off of your PC. When I ran COPP to identify the error on my machine, it gave me an ominous warning that “the exclusive semaphere is owned by another process.”

My Netflix technician told me that he had never heard of this particular error and thought that it was unique to my setup. When I consulted Microsoft, they suggested that I consult the creator of the program. Since Microsoft wrote the COPP software, I wasn’t sure who to turn to after that.

The irony in all of this, is that the DRM that Hollywood is so much in love with, is really only harming their paying customers. When you do a DRM reset, it’s not your pirated files that get revoked, it’s the ones that you already paid for that are at risk. I’m not allowed to watch low res Netflix files, even though I have the capability to download high def torrents? How does this even make sense? It’s as if the studios want their digital strategies to fail.

While I understand the need for the studios to protect their content, I believe that these measures go too far. It makes little sense to block my ability to copy low res internet movies, when I can always rip the DVD straight from my Netflix discs instead. By blocking access to my Netflix membership, Hollywood is once again punishing their customers by pushing defective DRM.