A recent MSNBC clip showcased the deleterious effects that Colony Collapse Disorder (CCD) is having on bees in the United States and CCDs impact on a 200 billion dollar worldwide agriculture industry.

Large agricultural processors, major fertilizer or chemical companies such as Archer Daniels Midland (ADM), Monsanto (MON), Agrium (AGU), Canada's Potash Corp. (POT) or even Germany's Bayer (BAYRY.PK) have strong vested interests in agriculture. Colony Collapse Disorder is devastating those interests. There are a few private and publicly held companies researching for treatments to CCD and other bee ailments. Are acquisitions around the corner? 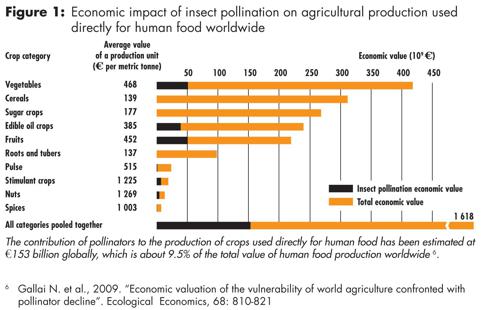 According to The United Nations Environment Program, they estimate that bee pollination supports 71 out of 100 crops. In Europe alone, 84% of the 264 crop species are animal pollinated and 4, 000 vegetable varieties exist thanks to pollination by bees1. The production value of one ton of pollinator-dependent crop is approximately five times higher than one of those crop categories that do not depend on insects2.

Over the past ten years bees have been dying and disappearing and alarming rates. In the U.S. alone its 2011 loss related to colony collapse disorder is estimated at over 30%. In Europe alone the numbers are also staggering.

What is Colony Collapse Disorder?

Among the key symptoms of CCD in collapsed colonies is that the adult population is suddenly gone without any accumulation of dead bees. The bees are not returning to the hive but are leaving behind their brood (young bees), their queen, and maybe a small cluster of adults. What is uncharacteristic about this situation is that the honey bee is a very social insect and colony oriented, with a complex and organized nesting colony. Failing to return to the hive is considered highly unusual. An absence of a large number of dead bees makes an analysis of the causes of CCD difficult. The remaining workforce seems to be made up of young adult bees. The queen is present, appears healthy and is usually still laying eggs, but the remaining cluster is reluctant to consume feed provided by the beekeeper, thereby greatly reducing their foraging.

According to a new UNEP report more than a dozen factors, ranging from declines in flowering plants and the use of memory-damaging insecticides to the world-wide spread of pests, pathogens, parasites and air pollution, or a combination thereof, may be behind the emerging decline of bee colonies across many parts of the globe3.

The number of bee colonies in the United States alone is reportedly close to 2.4 million hives. At a 30% the annual bee colony loss in the US alone constitutes 800,000 colonies that would have to be replaced to deal with current and future pollinate

on demand. That is a significant reoccurring loss to bee keepers in labor and bee replacement. Multiply that on a world wide scale where there are approximately 80 million bee colonies, coupled by lower harvest yields and higher prices, the economic impact is colossal.

The scale of CCD has forced beekeepers to incur additional costs associated replenishment of lost bees and prevention. While the data on this niche market value is at best limited, it is roughly estimated that in the Americas and Europe beekeepers spend billions each year on a host of bee health products.

Surprisingly however, the number of privately/publicly held companies that specifically deal with bee health is quite limited to a few.

In November, 2010 Bayer Crop science Ltd. (BAYERCROP.NS), acquired for an undisclosed sum UK based Exosect Ltd., a developer of bee health products for the control of mites (including varroa mites and tracheal mites). In September of 2011, Monsanto acquired Florida based Beeologics, the world's largest bee research facility and developer of genetically modified RNAi, technology which is delivered in bee feed, for an undisclosed sum.

One should note however, that the aforementioned acquisitions came at a time when Monsanto and Bayer have been under public ire as the main causers of Colony Collapse Disorder through their genetically modified crops and pesticides respectively.

Vita (Europe) Ltd. - Vita is a private UK based company that offers honeybee health products to the honey and pollination industries. Their products includes anti-varroa acaricides - Apistan® (outside the USA/Canada) and Apiguard® - chalkbrood and wax moth controls, foulbrood diagnostic kits and health-promoting feeds. Vita products have been registered by more than 60 veterinary authorities. Their products are designed to inhibit the build-up of resistance and wherever possible contain natural compounds and biological controls that are benign to all but the target pests. Their distributors list is impressive i.e., Novartis (NVS) and Agrium (AGU).

BeesFree Inc. (OTCPK:BEES) - coming out of the gate in late 2011 is the only company that has a comprehensive CCD prevention product in the market, Their technology consists of BeesVita PlusTM, a patent pending chemical compound containing natural elements extracted from pure vegetable sources, to remedy honey bee parasites, mitigate the effects of neonicotinoid-based pesticides and also provide nourishment to honey bees. They also developed a patent pending innovative delivery system - the Beespenser - which is a fully-automated device designed to attract bees with specific colors and shapes. There business model is razor blade - they sell their dispensers as a onetime cost and have reoccurring revenue through the sale of their compound.

According to their website, they have already signed deals in South Africa for $270,000 dollars that covers 500 Beespenser s and 4000 liters of BeesVita Plus. Additionally, they signed on to joint study with Argentina's National Institute of Agricultural Technology on hundreds of beehives to test the effectiveness of the BeesFree's patent-pending technology, in Argentina climates. This alone says a lot about the Company's trust in their products. If this test proves positive then BeesFree stands to make a windfall. The Company estimates the Argentinean market alone at 300,000 Beespensers. Based on the ratio of Africa deal, the general market value would be approximately $162 million in potential sales.

Their stock has been averaging in the $2.00+ range with 16m in outstanding shares.

Two things to watch out for the first is their end of the year run and the second is the results from the live trials in Argentina.

Laboratorios Lavet SRL (Argentina) - Laboratorios Lavet SRL, is involved with research, testing, manufacturing, and marketing of pharmaceutical preparations for use in veterinary medicine products for the prevention and treatment of diseases affecting animal life or alter production yields. It offers bee maintenance products through its "Bee Line" brand. The Bee Line products offered range from antibiotics to food additives for treatment for various bee ailments and nutrition. They have a presence throughout Central and South America.

The advantage to the big producers is clear - an addition to their existing product line and another point of entry into the global agricultural business sector. Any of them could lever their existing worldwide marketing reach and begin unloading product faster than an acquisition target's capacity could ever produce. Brand name recognition would no doubt also help sell the acquisition product(s). Considering the tremendous need for bee health products, market size companies that offer a credible treatment solution for Colony Collapse Disorder will have a number put on them shortly. The "Sizzle" is there.

1 Williams I.H., 1996. "Aspects of bee diversity and crop pollination in the European Union". In The

Alberto Savrieno
360 Followers
Financial Analyst for European family office for 10 plus years. Currently, working as an independent business researcher reporter and investing for my own portfolio.