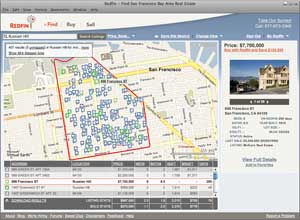 Venture capitalist Josh Kopelman has stated that he likes startups that shrink markets - “We love investing in technologies and business models that are able to shrink existing markets. If your company can take $5 of revenue from a competitor for every $1 you earn – let’s talk!”

And while he isn’t an investor in Seattle-based real estate startup Redfin, I’m pretty sure he likes their business model. The company is doing its best to completely remove real estate agents and brokers (and their absurd fees) from at least half of a home sale. If you use them when you buy a home, they reimburse 2/3 of the broker fee to you, keeping 1/3 for themselves.

60 Minutes covered the company last May, which led to a surge in business. CEO Glenn Kelman told me today that, since launching in February 2006, they’ve been involved in 1,500 transactions and have reimbursed $12 million to customers. The average refund is $10,000. The company had 2007 revenues of $5 million, he says.

They’ve just launched a new version of the website that includes more frequent MLS updates and the ability to group home sales by neighborhood and download the data. They are also providing deeper data on homes currently on the market as well as historical sales (they compete with a number of other startups in search, including Zillow, Trulia and Roost).

If you want to use Redfin, check first to make sure they cover your geographic area, which include the San Francisco/Bay Area, San Diego, Orange County, LA, Seattle, Washington DC/Baltimore, and Boston. Chicago is coming soon.

Editor's note: Publicly-traded companies with businesses competing in this sector include IACI, MOVE, SOLD, and ZIPR.

Michael Arrington
4.84K Followers
Michael Arrington is the founder of the Crunch Network and editor of TechCrunch (http://techcrunch.com), a highly influential Silicon Valley blog "dedicated to obsessively profiling and reviewing new Internet products and companies." He is on the board of Foldera, a web-based organizer, and is an investor in Daylife, a news startup. He has served as a corporate lawyer, been involved in sales and business development at RealNames and co-founded Achex, which was sold to First Data Corp. Arrington also founded two companies in Canada and was COO at Razorgator. His consulting stints have included SnapNames, Verisign and Spotback.