On December 31, 2007 Southwest's (NYSE: LUV) share of the $28.4 billion quarterly revenues generated by nine domestic air carriers was 8.4%. Question: What was LUV's share of market cap on that date?

Even if you have a large position in the stock, you may not know the answer. Why? Market share is a marketing metric. Does market share of group capitalization make sense?

The overarching purpose of my book Competing for Customers and Capital is to forge links between finance and marketing. Specifically, to show how the markets for customers and capital interact in generating revenues and creating value. But before I jump into that, take a look at how market share most often is used in the press.

In their February 7, 2008 article, "Northwest and Delta Talk Merger," Andrew Ross Sorkin and Jeff Bailey make just one reference to market share, one which is not share of capitalization:

United, with strong Pacific routes, a big Chicago hub and a large market share on the West Coast, would complement Continental, which has big hubs in Houston and Newark and gets more of its revenue from international flights than any other big domestic carrier.

Similarly, in Jeff Bailey's January 17, 2008 NYT article,"In the Math of Mergers, Airlines Fail," he makes only one reference to market share, and again, it's one which is not share of market cap:

The second theory used to justify airline mergers is that combining would increase revenue because a bigger route system would help take market share from competitors.

In fact, references to market share in The New York Times are unusually frequent compared with other sources, including financial blogs. They may have a gut feeling about the importance of market share. The markets for customers and capital interact in many subtle ways that affect stock price. Which in turn affects revenue. The purpose of this new series on airline mergers is to show the importance of tracking that interaction.

The following table presents the basic data on market value and revenues. The first column lists the ticker symbols of the nine airlines used in this analysis. The second column lists the closing price of each stock on February 29, 2008. This is followed by the number of shares outstanding (in millions) on December 31, 2007. Next market value in billions, the arithmetic product of price and shares out, appears in the 4th column. Finally revenues (in billions) are listed in the last column. The shares out and revenue data were downloaded from the EDGAR Online I*Metrix financial database. 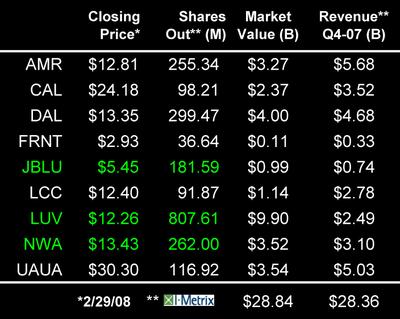 By the way, notice the group's total market value ($28.84 billion) and revenue ($28.36 billion) are nearly equal. That is the group's value/revenue ratio is about one, which is exactly what I found to be the long-run expectation.

It's simple to convert the basic data into share of value [%SOV] and share of revenue [%SOR]. That's done in the following table for the same nine airlines. The value-revenue [V-R] differential is calculated in the 4th column. For example, American Airlines' (NYSE: AMR) value-revenue differential is -8.7%. The company generated 20.0% of revenues in the last quarter of 2007, but it created only 11.3% of the group's market value. Is this a bad thing? Yes, its market churn was nearly twice its value creation. 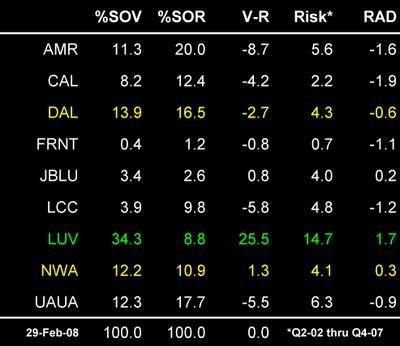 The answer to the question I asked at the top of this post appears in the table above. LUV created 34.3% of the group's market value with only 8.8% of group revenues, or, the Southwest Airline employees share of value was about 4 times the share of revenue. Is this a good thing? Yes. If you're interested in the theory behind this metric and how it behaves over the long-run in the airline industry check out my audio slide show Y'all Buckle That Seat Belt.

Does data in the table above shed light on a possible merger between Delta (NYSE: DAL) and Northwest (NYSE: NWA)? Begin with their V-R differentials: DAL has a negative differential of -2.7 points while NWA has a positive differential of +1.3 points. The volatility [Risk] in these differentials is measured by their standard deviation over the 23 quarters from the Q2-02 through Q4-07: 4.3 and 4.1 respectively for DAL and NWA. Dividing the differentials by their risk creates a risk-adjusted differential [RAD].

Since it is a standard normal variable, with mean 0.0 and sigma 1.0, any value of RAD greater than +2.0 identifies a company as a high-flyer. Any company with a RAD greater that +2.0 is performing two standard deviations above the expectation. The chance of observing this extraordinary performance is about 5 in 100. In the last quarter of 2007 LUV was approaching this upper limit with a RAD of +1.7.

Alternatively, any company with a RAD less than -2.0 is a bottom-feeder. Its performance is two standard deviations below the expectation. The change of observing this weak performance also is about 5 in 100. In the last quarter of 2007 AMR was approaching this lower limit with a RAD of -1.5.

The following table summarizes the implications of a DAL-NWA merger using this theory. 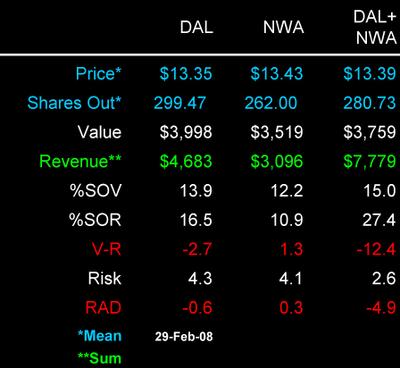 The markets have had plenty of time to anticipate effects of the merger and incorporate them into the prices of DAL and NWA. Both are valued at a little over $13 and both have a similar number of shares outstanding. So, a back-of-the-envelope valuation of the combined companies is the arithmetic product of the mean of their individual prices ($13.39) and shares outstanding (280.73 billion). This leads to a merged market cap of $3.759 billion. Taking a neutral point of view on the revenues of the combined companies, I added their Q4-07 revenues.

NOT A PRETTY TAIL

Will this analysis prove to be accurate? Probably not. But it gives DAL and NWA management food for thought. Perhaps even more important it also gives them a new way to study the unintended consequences of a merger. What do you think?

Victor Cook
66 Followers
Victor Cook, Ph.D. is Emeritus Professor of Management at Tulane University. In addition to his university service, Cook has experience in senior management positions. Among those he has been for over thirty years, president and lead designer at thestyle.com Professor Cook began his academic career as a doctoral fellow at the Marketing Science Institute and Lecturer at the Wharton School. He moved to Cambridge, MA as Associate Director of Research when MSI was acquired by the Harvard Business School. He served six years as an Assistant Professor of Marketing at Chicago Business School before joining the Tulane faculty. Visit his blog: customersandcapital.com.
Follow
22 Comments
To ensure this doesn’t happen in the future, please enable Javascript and cookies in your browser.
Is this happening to you frequently? Please report it on our feedback forum.
If you have an ad-blocker enabled you may be blocked from proceeding. Please disable your ad-blocker and refresh.