The "Fed Model" got its name when the documents accompanying Alan Greenspan's July 1997 Humphrey-Hawkins report to Congress contained a comparison between price-earnings ratios and Treasury yields as a means of gauging stock market over or under valuation. In fact, the comparison had been discussed by Fed officials, as reflected in FOMC transcripts, as a measure of disequilibrium at least a decade before that time. (Huston and Spencer, 2009) The "Fed Model" has also attracted some academic attention. For example, Burton Malkiel (2004) demonstrated its superiority over other "mean reversion" models in predicting long-run returns. The Fed Model compares the long-term bond yield (i) with the earnings yield on stocks (e/p). Using the data on Standard and Poor's Composite Index (SPY), earnings and the yield on the ten year treasury bonds generates figure 1 below.1 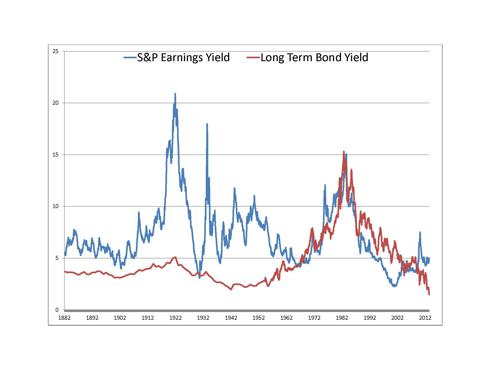 Expressing the comparison as a ratio gives i/(e/p).2 A higher value means that bond yields are large relative to stock earnings yields. Thus, peaks in the ratio such as those in 1929 and 1999 indicate equity prices that are high relative to bond prices. 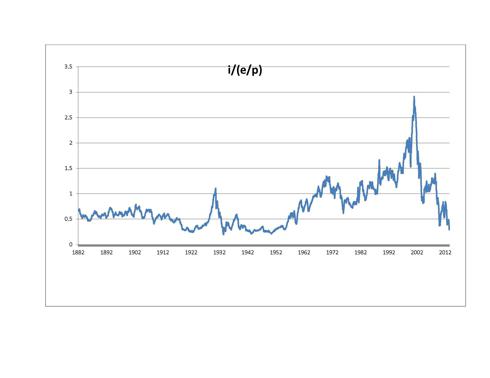 So does this imply that stocks are currently undervalued? The short answer is yes - statistically speaking this is a stationary series suggesting that the ratio's value should rise back to more familiar levels in the long run. However, just because it is mean reverting doesn't imply that over or undervalued stocks won't become more over or undervalued before returning to equilibrium. Someone using this tool as a trading signal could have sold in the early 80s as stocks reached 1929 valuation levels only to see them continue to rise for the next two decades. In addition, the fact that current equity prices are low relative to bonds may simply reflect greater risk. The prior periods matching our current low ratio include World Wars I and II and the Great Depression; periods which could have led investors to demand a greater risk premium. Finally, the ratio could return to its mean without an equity price increase due to a rise in long-term interest rates or a fall in earnings. One could certainly justify predictions of either of those.

1 All data is from Robert Shiller's web site. Shiller uses the 10 year average of historic earnings to "cyclically adjust" his p/e.