Quality of earnings is generally defined as earnings' ability to persist in years. The more persistent the earnings of a company are, the more higher is their quality. The level of persistence is important because it gives investors a certain degree of confidence in the projections of future company performance.

Before entering into the Caterpillar Inc. (NYSE:CAT) quality of earnings, some definitions should be presented.

Under the modern accounting system, a company's revenue consists of a cash component and an accruals component. The cash component is considered to be free of management discretion while the accruals component involves discretion in many places. By deciding the methods of depreciation, the timing of expending some costs, the conditions under which a sale is deemed as made, among others, the management could try to direct earnings in a desired direction.

There are many incentives for playing with earnings, including the goal to meet certain analysts or market expectations. However, one should note that the existence itself of accruals does not automatically mean there is an earnings management issue. What accruals tell us is that those earnings have lower quality compared to the earnings of a peer company with a lower accruals component.

A way to measure the level of discretion involved in company's earnings is to calculate the aggregated accruals from the company's financial statements. This would illustrate the use of discretion on a companywide level. Comparing accruals through years would show the direction in which the company moves. One of the main reasons for examining company's accruals is that historically earnings which consisted largely of accruals tend to revert to their mean level faster than those who rely more closely on cash. Thus if a company's exceptionally high earnings are combined with a large accruals component it could be expected that they would decrease to their mean level faster compared to higher quality earnings.

Aggregated accruals could be derived from balance sheet or cash flow data. Respective calculations are shown below.

Generally a Cash flow accruals measure could be seen as a more reliable one because of the believe that cash flow statement is harder for the management to play with. The typical correlation between the two types of accruals is above 0.80 so they should be expected to reveal similar pictures.

Accruals are also important if an investment choice between several companies has to be made. By comparing accruals ratios between peer companies the ones with a lower ratio, and thus a higher earnings quality could stand out. The accruals ratio puts companies of different size on the same level. It is calculated by normalizing the aggregated accruals by dividing those accruals (either the balance sheet or the cash flow ones) by the company's average net operating assets for the period.

Now, after all the needed definitions are in place we could examine the accruals of Caterpillar Inc. for the last 5 years presented in the following table:

We see that company's accruals follow a bit of a swinging pattern with a relative growth in the first two years followed by a sharp decline in 2009 and increases in the years after. The drop in the 2009 amount could be a combined result of the decreases in company's receivables and payables as a direct effect of the lower sales due to the worse economic conditions during the year.

The accruals growth for the last year (2011) however seems a particularly high one given the sample.

During 2011, several acquisitions happened, which increased company's assets, including CAT's receivables. This means that all other things equal more sales are made on credit compared to the previous period. This could present a risk given a worsening of world economic conditions happens in near future. The increase in Caterpillar's all receivables of 2011 over 2010 is about 8% while the company's revenues and earnings growth was 41% and 83%, respectively. While the latter figures are impressive and stand far away from the smaller increase in receivables for the period we should note that the aggregated accruals (based on balance sheet data) for 2011 amount to about 15% of company's revenue. Those accruals are about hundred times larger than the ones measured in 2010 (87 in the table above). Although the sample of 5 years could be relatively a short one, the accruals ratio for 2011 (21.7%) is considerably higher than the average company's value for the period (5.8%). The high growth of earnings for 2011 combined with the increase in the accruals component could flash a red light concerning the company's ability to sustain such a growth in the following years.

In order to gain a better perspective of Caterpillar's position relative to some of its peers it is advisable to examine and compare their accruals. Data for the last five years period is shown below.

The following graph shows there are worse performers concerning the average accruals ratio for the last five years than Caterpillar. The graph is constructed by subtracting the peers' average ratio from each company's own average ratio. 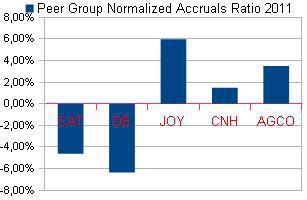 Given the graph and the last five years of data only Deere & Co. (DE) shows a better performance than Caterpillar. The other three companies -- CNH Global N.V. (CNH), AGCO Corp. (AGCO) and Joy Global Inc. (JOY) -- exhibit higher accruals and thus their earnings could be considered to be less persistent concerning the last 5 years period.

For 2011 Caterpillar is in the middle of the sample being closer to the mean peer value than it was for the last five years period. We witness a deteriorating earnings quality - something that should be kept in mind. In a better position concerning the accrual ratio for 2011 are Deere & Co and CNH Global N.V. If we exclude the very high sample value of Joy Global Inc. from the calculation the peer average lowers down to 18.04%. In this case Caterpillar's accruals are going above the mean value which further increases the need of careful examination of management's choices.

Without a further analysis it is hard to say if the company is going really to present a lower income in the following years but given the not-so-bright economical conditions in the world its growth rate could definitely suffer. The fact stays that Caterpillar last year's earnings growth is already lower compared to the 2010 one. The steep increase of aggregated accruals as a warning sign concerning earnings ability to persist in time, is also hard to be unnoticed.

A possible strategy for someone to take advantage of a combination of worsening world economic conditions and the possibility that the company would present a lower income for 2012 could be to buy long-term put options around the current price. That would limit the downside risk to the amount of money invested in the puts while presenting a profit opportunity. The $87.5 puts expiring February 2013 could be used even if they are set to expire a bit before the company usually files its annual report. Practically speaking around that time the market and the stock price should have already shown if the deal is about to reap a profit. Given the current option price of $10.95 the break-even price of the put goes to $76.55 which is about 10% below the current market price of the stock. To the extent that the deteriorating economical conditions don't weight too much on the expectations, this strategy could be combined with betting on the better quality earnings of Deere & Co, effectively turning this into a "sell the overvalued, buy the undervalued" asset strategy.

A more long-term approach also exists. It is based on the idea that the mean reverting effect of the accruals might need time to be seen in the financial statements and that the accruals component itself might continue to grow which in turn would further increase the risk of having unsustainable earnings. In this case one might use the puts that expire in January 2014. They would require more money but there is a greater chance for the needed developments in the financial statements to appear.

The owners of CAT shares could hedge themselves by the covered call strategy. The premium collected would protect the investment to some extend while leaving the door open for a participation in further stock price increases. The in-the-money February 2013 call at $82.50 sells for $10.7 so it protects the position to around the $74 level. The reasoning behind this approach is that if the company's performance and perspectives are not broken completely even if the accruals result in a lower income for some periods, the long-term growth would continue.

Vision Capital M.
132 Followers
With more than 17 years of interest and experience in financial markets, I dare to say I have learned that the obvious is not always true and the multitude is often wrong. Still the markets always tend to provide hints and directions. Learning to listen, see and act happens to be the hardest part. Success in Stock and Forex markets requires labor and learning. The rewards could be great as well as failures. And they are almost always a single man (or entity) game. I'm open for business in the investments and finance field so if you have an offer, please contact me. ===N.B.=== Disclaimer: Each of my articles is considered to be a Research Material and reflects my personal opinions as at the date of writing. As a Research Material the article is an expression of an analytical and educational point of view towards the economy on the macro and micro level, stock exchanges, trading strategies, FOREX market, currency levels, stocks or any other investment or financial instruments I am examining or writing about, it is not and should not be used as an offer or solicitation to buy, sell or in any other way trade securities, commodities, currencies or any other financial instrument, it is not a personalized investment advice, and constitutes no contract between me and the readers or publishers of the Research Material. Moreover, any past results are not indicative of future results. Investors and readers are encouraged to seek professional advice on their investment intentions and their particular situation. The author of each article ("Research Material") is not responsible and accepts no liability to any party for any actions or lack of actions and any results, including any form of loss, arising in any way from acting upon the Research Material. All parties reading this accept that they act or do not act by their own will and they will not hold the author of the Research Material liable for any of their results. End of Disclaimer /===N.B.===
Follow
1 Comment
To ensure this doesn’t happen in the future, please enable Javascript and cookies in your browser.
Is this happening to you frequently? Please report it on our feedback forum.
If you have an ad-blocker enabled you may be blocked from proceeding. Please disable your ad-blocker and refresh.