A few weeks ago on Seeking Alpha, I had a debate with some members as to whether investing in US Real Estate - namely homebuilders - was a good idea or not. The discussion transcended into a debate over the outlook for U.S. housing. Let me be clear with this, I believe US Real Estate and all things associated with it (remodeling, brokering, furniture, etc.) is perhaps one of the most compelling long-term investment opportunities available to global investors today.

When evaluating investments for my clients, I first always attempt to understand the macro symmetry of the opportunity. One of the best ways to do that is to understand industry level dynamics relative to the economy as a whole.

Take Residential Investment to start. As shown below, as a % of GDP, residential expenditures are at their lowest levels since our data set began (which includes the 1990's "bust"), but have seemingly troughed in both absolute $ and relative to GDP in the last year. Relative to non-residential capital investment, residential investment is at its largest spread ever. 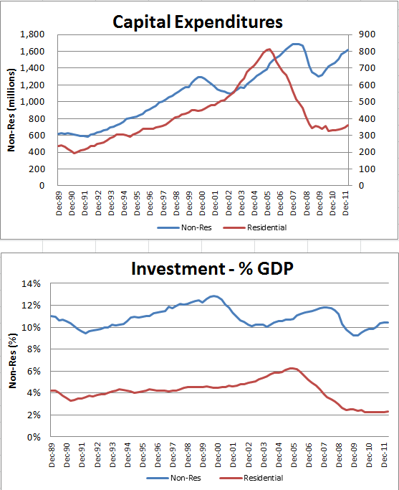 Some will argue that this is no indication things will get better. I rebut that in my experience, "it can't get worse," is a perfectly legitimate investment criteria because it immediately frames your downside risks. Truncating downside risk is the first step in creating an asymmetric payoff profile.

Second, for those who continue to argue bearishly against US Real Estate, I say to have that view one would then have to be de-facto bearish on the US economy. I partially share this view (though I think an uptick is coming, which I will write about later), but I suggest you can find a lot better places within Non-Residential Investment sectors to place your short bets. Furthermore, in anything but the major recession scenario, I believe that given the sheer depression in the residential sector, it can act as a buoy during its idiosyncratic recovery while other parts of the economy adjust downward. Economically speaking, this would be similar to the 2001-2003 period.

The housing market is distorted. It was distorted on the way up and is distorted on the way down. Anybody who has tried to purchase a house in the last few years knows first-hand how screwed up the process is right up through today. Foreclosures and short sales are depressing comps, hence causing overly conservative appraisals for anybody who qualifies for a loan. Buyers and sellers cannot meet on a price without buyers ponying up short-fall capital against already mandatory 20% down-payment rules.

At the same time, vulture buyers who can close fast are snatching up homes for a smile. Oftentimes they are putting in property improvements and flipping for significant profits to conventional buyers who are able to own an decent house for significantly lower than the equivalent rental. The unlevered IRRs on these deals are upward of 50% when executed properly.

I am not saying the banks are being overly cautious, but they are indeed distorting the markets. The problem with appraisals in severely distressed areas is that it causes a negative feedback loop. Low appraisals-->more people underwater-->more delinquencies-->continued unemployment-->more delinquencies, etc. But eventually, like a forest fire, it burns itself out. Indeed, there may be light at end of the tunnel as delinquency levels improve and markets repair themselves. 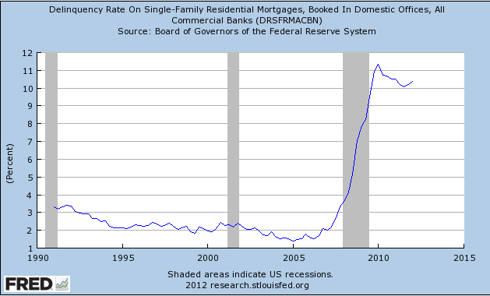 So now the question is, what will drive delinquencies lower, catalyzing the positive feedback loop? The answer, perversely, is higher prices.

I consider housing a commodity. And like any commodity, its price is regulated by the economic forces of supply and demand. On the supply side, some pretty dramatic reduction of inventories does appear to be happening when analyzing inventory and price trends. Mind you, these are the exact same trends we spotted in 2006 (higher inventory, lower sales volume, falling prices) - except in reverse (lower inventory, higher sales volume, increasing prices).

At some of the most notorious housing bubble markets, which are the root of a lot of the delinquency problems, there has been marked improvement. Phoenix may indeed be a Petri dish for what the positive feedback loop can look like.

Inventory in Phoenix is down from nearly 50,000 homes in July 2007 versus 14,000 homes July 2012. Whether you use Zillow, Trulia, Housingtracker, or common sense (seems to be really lacking among the perma-bear bloggers), you know prices have moved up big. And guess what, there is still little building due to a lack of capital. How long do you think the animal spirits will be kept down in Phoenix? 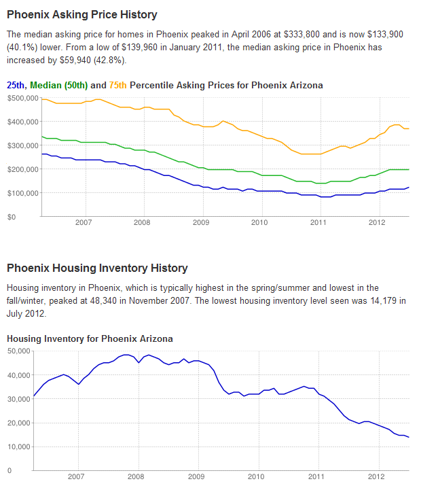 And it's no coincidence that the economic news coming out of Phoenix has improved significantly - due to housing. Which has in turn led to significant improvements in foreclosure and delinquencies.

There are some who argue about "shadow inventory" and banks waiting to release properties. It could or could not be true but let me say that when you have in many cases a decline of 50,60 and 70% in peak inventories, it's very difficult for me to see exactly how so much inventory can flood the market so as to change such dramatic trends. If you want to pontificate about how screwed up the banks are, go ahead. If you want to make money, then play the game.

Phoenix aside, no doubt on a national basis the demand side is weak due to poor employment trends and poor wage growth. But it is not getting worse and we are witnessing slowly rising prices against very little inventory. At 6 months supply of housing, the market is historically balanced. Do note, if the national market is balanced, that means there is imbalance on both sides of the ledger right now, basically returning one's personal evaluation on housing back to a local affair.

Still, national dynamics still matter for now given the inter-connectedness of the economy. Whereas home purchase volume has dropped about one third from peak levels (and is about 15% below more "normal" periods like 1999-2002), housing construction has dropped an incredible 75%. Stunning.

Hence supply/demand has actually improved with respect to pricing. 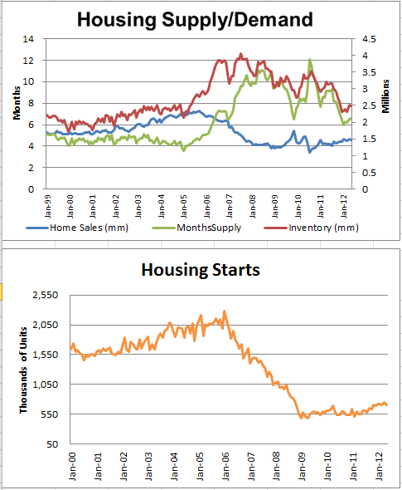 If you believe that house prices will remain stagnant for years to come, then it will have to be a result of balanced supply and demand. But since we have net depletion of about 800,000-1,000,000 homes per year (home purchases - starts), the supply needed to keep prices from sharply appreciating can only come from increased housing starts. Given the overall devastation among the residential home builders, I have no idea how they will be able to put up the necessary units to simply keep supply-demand balanced even at depressed demand levels. The shortage of homes we are seeing in Phoenix, Sacramento, Miami, will almost assuredly become a national phenomenon.

Finally, U.S. housing prices are in aggregate just silly cheap (this is the official economic term). Price it in BRL, GBP, EUR, there is a reason people are coming to this country with suitcases of cash. Housing is even historically cheap within expensive markets. Oakland vs. San Francisco, Washington Heights vs. Central Park West, South Beach vs. Hialeah. Have you compared flats in Manhattan versus the West End of London, Hong Kong, or Sydney? Manhattan is a steal.

And for you gold bugs (me included), if you're willing to take some illiquidty, you get paid handsomely for it in US residential real estate. The fact of the matter is that we overshot to the downside and the positive feedback loop has some legs once it starts. 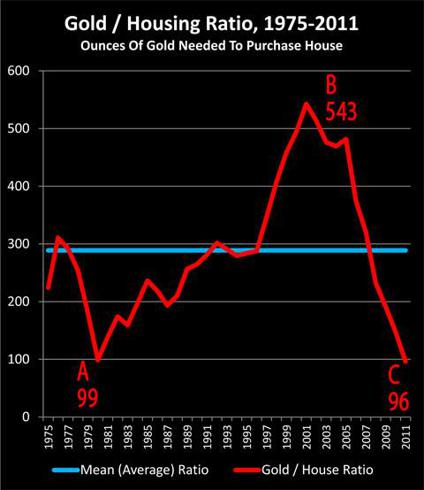 As a thematic investor, my preferred way of accessing this incredible opportunity is through the XHB ETF. The fund has a low expense ratio of 37 bp for easy access across a wide swathe of housing - from the middle America homes provided by Pulte (PHM) to the high end homes from Toll Brothers (TOL). However, if I were to pick a single company with the best leverage to the opportunity, it would be Lennar (LEN). The company is one of the best run in the sector. It is also highly levered to the success of its wholly owned subsidiary Rialto, considered by many investors as one of the savviest distressed real estate fund operators. Lennar has had a huge run, up significantly from the October 2011 lows, so an investor may want to be discerning with entry point. But there is no doubt the company is firing on all cylinders right now with huge macro tail winds still to be realized.

We are at the tipping point for US housing where either prices go up violently - significantly helping the negative equity and delinquency situation - or homebuilders start breaking ground now, which helps the employment situation and also gives a tailwind to prices. 5 years into this hell, the light is at the end of the tunnel. It's a win-win situation for America at this point. Let us never forget the lessons from this dark period.

Disclosure: I am long XHB.