Most mainstream commentators seem oblivious to the fact that the Fed purchased an unprecedented 61% of U.S. debt issued in 2011.

The recently released Federal Reserve Flow of Funds report for all of 2011 reveals that Federal Reserve purchases of Treasury debt mask reduced demand for U.S. sovereign obligations. Last year the Fed purchased a stunning 61% of the total net Treasury issuance, up from negligible amounts prior to the 2008 financial crisis. This not only creates the false appearance of limitless demand for U.S. debt but also blunts any sense of urgency to reduce super-sized budget deficits. 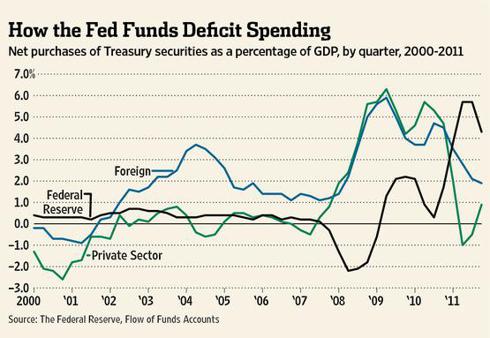 Still, the outdated notion of never-ending buyers for U.S. debt is perpetuated by many. For instance, in recent testimony before the Senate Budget Committee, former Federal Reserve Board Vice Chairman Alan Blinder said, "If you look at the markets, they're practically falling over themselves to lend money to the federal government." Sadly, that's no longer accurate.

Total Fed Treasury holdings are now a whopping $1.66T; 16% of total outstanding U.S. Treasuries. Including distressed assets and MBS, the Fed's total balance sheet is equal to 18% of GDP, or $2.52T. 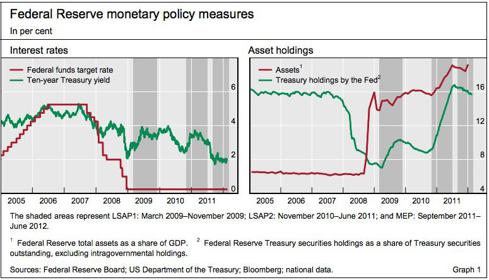 When the Federal Reserve acts to lower yields for longer dated bonds and the Treasury has large longer-term borrowing needs, a conflict of interests may emerge. (BIS, 3/2012, Pg. 30 Report - pdf )

These reasons are valid . . . in the short term. However, yields cannot go much lower without risking 1) treasury dumping, 2) a stock market bubble, or 3) banishing savings and the capital formation process altogether (and no, we are not Japan and will not furnish a zombie economy as successfully): 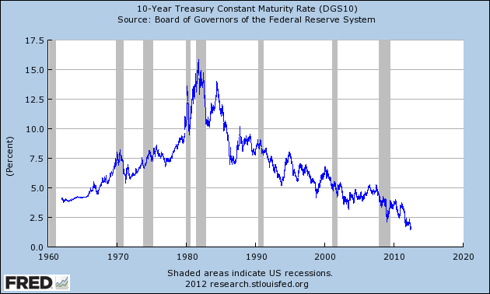 Of course yields can go lower; short-term rates can asymptote to zero (or perhaps negative as we've seen in Denmark) so long as the Fed feels that a 10-year rate of 1.5% is stifling the recovery, and that a few basis points lower will cross some Keynesian threshold that unleashes the bankers' absentee bull market to try to redeem their faltering credibility. Icarus flew too close to the sun.

The Fed has done all it can, short of buckshot purchases of the indices. Rates must remain low, allowing the so-called "U.S. government" to finance its chronic fiscal shortfalls--not to "force savers to spend" as it claims. The savers won't spend because they can't anymore.

The Fed cannot get blood from a stone; real incomes have been stagnant since the 1970s: 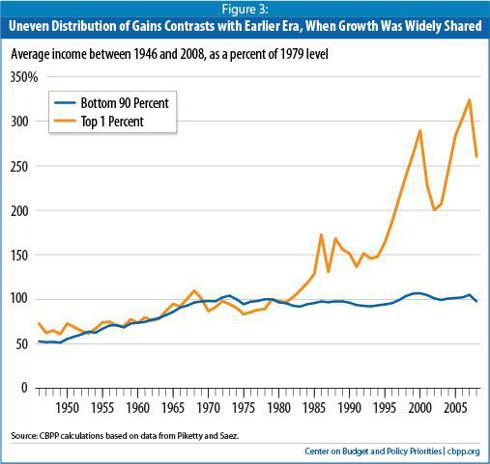 Structurally depressed real wages, coupled with increased productivity helps explain the monumental wealth disparity, as earnings are transferred up the income brackets. In other words, aggregate demand is low because the masses are broke!

Monetary Keynesians fail to realize that uber-accommodative policy will not solve this problem, in fact it worsens it; workers need jobs with decent wages, not low rates which erode savings (which transfers more wealth to the wealthy, who hold inflation-hedged assets to begin with, and are not solely dependent upon moderate or fixed-income).

ZIRP favors Federal Reserve member banks by preventing defaults and creating a nice spread between the Fed funds rate (18 bps) and the prime rate (3.25%): a healthy 3.07%.

Because wages have not kept up with the public expectation of a steadily advancing standard of living (formerly known as the "American Dream"), credit exploded to compensate.

Now we come to find that debt cannot be paid off, public and private. Who should rightfully hold the bag? Banks. Who ends up holding the bag? Taxpayers. Fed Member Banks own enough politicians and regulators to ensure the losses are "socialized." 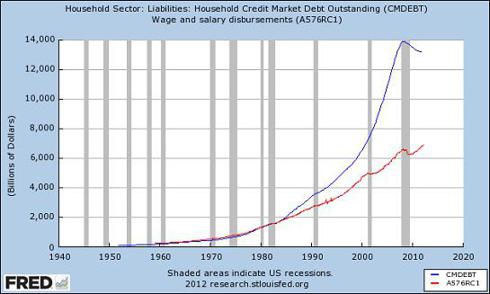 (Wages are NOMINAL here, which means they're even lower than this chart suggests in real terms). 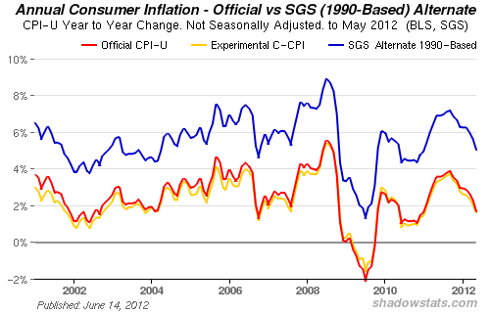 As of this writing, the 10 year remains at 1.5%, investors buying now lock in a real negative return between -20 basis points (official) and -4.5% (Shadowstats) per annum. This is to assume bond prices do not fall, incurring a loss of principal.

What if, God forbid, China, Japan, UK, Saudi Arabia, or other major buyers lose their appetite for Treasuries? It is only a matter of time, especially if the U.S. keeps making empty accusations of China being a "currency manipulator" while the U.S. explicitly plans to devalue the dollar 33% by 2032.

Talk about the pot calling the kettle black. China pegged the yuan to the dollar to cheapen goods sold to the United States. When China does revalue the renminbi upward, the U.S. dollar will be priced out of the market for commodities and the cost of living will rise.

It would take years before U.S. manufacturing regains the competitiveness necessary to pay fair value for commodity imports. A stronger yuan translates into rising U.S. import costs in the near term with the prospect of stronger exports eventually (discounting domestic de-industrialization and crumbling infrastructure).

The Fed would not dare allow rates to rise, especially not after it promised ZIRP until 2014, and certainly not with the Fiscal Cliff threatening to bring about the apocalypse that the special interest groups (like the military) foresee.

The Fed will keep nominal rates low for the "foreseeable future" (which is not close to foreseeable in complex systems - pdf like financial markets).

Ultimately, the Fed exerts even less control over the dollar's decline as world reserve currency and the petrodollar standard. China, Russia, Brazil, India, all of the other economic powers are trading bilaterally in their own currencies, as well as in gold.

To end with two pertinent quotes:

In the short term interest rates should keep rising because debt is increasing faster than GDP. This should be true in the United States also, but capital is moving there for perceived safety reasons. After the defaults occur, there will be slow growth. The defaults will ultimately create a banking crisis, and that will result in a World Economic Conference where the leaders will agree on an objective of 7% nominal growth made up of the 2% real growth and 5% inflation.

Check writing in the trillions is not a bondholder's friend; it is in fact inflationary, and, if truth be told, somewhat of a Ponzi scheme. Public debt, actually, has always had a Ponzi-like characteristic. Granted, the U.S. has, at times, paid down its national debt, but there was always the assumption that as long as creditors could be found to roll over existing loans - and buy new ones - the game could keep going forever.

Sovereign countries have always implicitly acknowledged that the existing debt would never be paid off because they would "grow" their way out of the apparent predicament, allowing future's prosperity to continually pay for today's finance.

Now, however, with growth in doubt, it seems that the Fed has taken Charles Ponzi one step further. Instead of simply paying for maturing debt with receipts from financial sector creditors - banks, insurance companies, surplus reserve nations and investment managers, to name the most significant - the Fed has joined the party itself. Rather than orchestrating the game from on high, it has jumped into the pond with the other swimmers.

One and one-half trillion in checks were written in 2009, and trillions more lie ahead. The Fed, in effect, is telling the markets not to worry about our fiscal deficits, it will be the buyer of first and perhaps last resort. There is no need - as with Charles Ponzi - to find an increasing amount of future gullibles, they will just write the check themselves. I ask you: Has there ever been a Ponzi scheme so brazen? There has not.

Don't overpay for U.S. Treasuries today only to watch central bankers inflate away your returns tomorrow. Caveat emptor as the empire declines.