Stem cell technology has already changed the future outlook of modern medicine and provided unprecedented opportunities in product development as well as insight into the very fundamental mechanisms of normal and disease processes. As this understanding of stem cell technology increases, so is the focus of translating such knowledge into novel, more effective and safer treatments for cancer than those currently available. The new-found role of a distinct type of stem cell, cancer stem cells (CSCs), has many implications for the future cancer drug development. What is critical to understand is that cancer stem cells are now known to initiate tumor formation, mediate metastasis (the spread of existing cancer cells) and confer resistance to the currently available drug regimens of chemotherapy including radiation therapies. Thus, the importance of this area is high since it gives rise to an entirely different approach towards product development which may lead to future therapeutics which are both innovative and valuable.

At the forefront of this area are innovative companies developing drugs that target CSCs which, as clinical trial data unfolds, will begin to elucidate how important CSCs are in driving the disease. What is clear though is if cancer recurrence and growth is driven by cancer stem cells, this will have major implications for the focus of all forms of therapeutic drug development designed to treat cancer. One of the most important reasons is that drug approval is dependent on overall and disease free survival statistics and agents that can impact such outcome, even by combining with existing drugs, will be significant.

As mentioned, many cancers are resistant to current chemotherapeutic drugs for reasons that have not been clear in the past. However, it is now known that cancer stem cells divide slowly, even entering a resting state which is a form of parking in a non-active state. Typical chemotherapeutic drug products aimed at rapidly dividing cells are unlikely to eliminate such slowly dividing CSCs, which is actually an observed result demonstrated in humans and animals. This, among other known factors, give CSCs their drug resistance.

Thus, there are many recent observations that chemotherapy and radiation do not effectively kill cancer stem cells, but instead selectively enrich for them. This has been seen even for anti-angiogenic drugs like Avastin (bevacizumab) from Roche Holdings (OTCQX:RHHBY) which has been found to increase metastatic and invasive aspects of breast cancer cells. After assault by traditional chemotherapeutic drugs, CSCs can live on to repopulate existing tumors and to facilitate their spread to local and distant organs. It takes just one cancer stem cell to replenish an entire tumor (See Illustration). 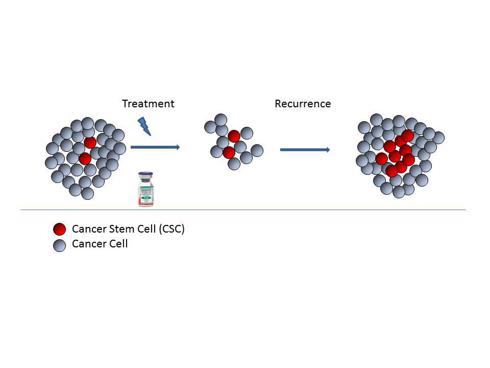 This latter effect has been demonstrated in both melanoma and prostate cancer models and thus, represents a changing landscape for the near future of drug development as well as for clinical intervention.

It's time for a game change:

Innovative microcap companies are leading the way in this space and there is accumulating interest from the market via activity by large cap pharma as well as investors. For example, the recent acquisition of this technology is represented by Micromet with its BiTE antibodies (MT110). The company was acquired by Amgen (AMGN) with a valuation holding approximately $1.16 billion which was unanimously approved by both the Amgen and Micromet Boards in January 2012. MT110 recognizes cancer cells expressing the epithelial cell adhesion molecule, EpCAM, a target antigen that is highly and frequently expressed on the surface of many types of solid tumors as well as CSCs. In addition, Boston Biomedical which is focused on the discovery and development of novel therapeutics that target cancer stem cells was also recently purchased for north of $2.5 billion by Japan's Dainippon Sumitomo Pharma Co. (OTCPK:DNPUF). These are early signs of the perceived value of this area.

As many know, Verastem (VSTM) closed a very recent IPO and valuation above $200 million, curiously, with only pre-clinical assets targeting pathways important for CSCs survival, thus revealing further intent for the market to realize the commercial value of this space. Another CSC targeting company, OncoMed Inc., with a Phase I product OMP-59R5 (a fully humanized antibody targeting Notch2/3) is currently seeking to raise $115 million in an IPO and has significant development partnerships with GlaxoSmithKline (GSK) and Bayer (OTCPK:BAYRY) at this early stage of clinical development. These early stage companies, such as Verastem and OncoMed, are a considerable distance of several years behind entities such as ImmunoCellular (OTCPK:IMUC) which is at this point in time is likely one of the most advanced companies in this space. Its lead product ICT-107 is currently in a Phase IIb trial and targets several antigens on cancer stem cells in addition to targeting Her-2 and IL12aR which are present on breast cancer. This is very important because drugs that target only one CSC pathway will likely be evaded as those markers disappear or shift in the growth of the cancer. ICT-107 has shown in its clinical trials in brain tumors that after vaccination, the level of CSCs (as measured by CD-133 positive cells) go down by 5-10 times. In contrast if you don't treat with vaccine, these levels usually increase by 2-3 times. ICT-107 targets six different antigens, several of which are expressed on breast, ovarian, brain and other solid cancers. A second product, ICT-121, specifically targeting cancer stem cells (CD-133 targeting) received IND status only this last week and could potentially be used in multiple indications. All this combined will likely give them a competitive advantage.

In summary, implications of CSCs in drug development are many and in fact much awaits to be seen as the products and clinical trial data unfold, however, I see three main impacts on the field.

1. Combined treatment: it is unlikely that CSC treatment will be a standalone drug since targeting the daughter cells of CSCs and CSCs (the root) themselves is most appropriate. For example, in cases such as breast cancer where Avastin (Bevacizumab) has failed alone, it clearly opens up a clinical opportunity to demonstrate Avastin may be able to be used again in combination with CSC targeted drugs such as ICT-107 or Oncomed's OMP-59R5 antibody to salvage antiangiogeneisis agents in indications such as breast cancer.

2. Radiation oncology: radiation enhances CSCs and thus, there is emerging evidence that CSC targeting may increase the effectiveness of radiation therapy (RT).

3. Clinical trial outcome: The entire approval process of cancer drugs reaches a focal point of clinical trial statistical outcomes. If CSC targeting drugs can improve the margins of progression free survival as well as overall survival, this can potentially resurrect indications that have failed for alternate cancer drugs. All three of these points create a great condition of acquisition by larger institutions which is exactly what has happened thus far.

Disclosure: I am long OTCPK:IMUC.

Andrew J. Norris
171 Followers
I research early (micro cap) and mid phase publicly traded companies in the Biotechnology and Medical Device sectors that are harder to at times find information on for investors. I believe that these companies, although potentially more volatile than their larger cap retail counterparts, hold great value. With a clear understanding of where their product is positioned in the market, the capitalization and the team, these smaller companies can hold incredible value over the long term. I have a varied background in both business and in the technical sector. Currently, I also am a co founder of BCN Biosciences in Pasadena CA, a privately held biotechnology company in addition to holding a research faculty position at the University of California Los Angeles Department of Radiation Oncology.