The leading automakers are scheduled to report monthly sales on Wednesday, August 1.

Summary: The leading automakers are scheduled to report July 2012 auto sales on Wednesday, August 1. While the Y/Y comparisons are expected to be quite healthy, the major automakers are projected to see a month over month decline, due in part to a weaker macroeconomic backdrop and anticipation for year-end incentive plans and new models.

Overview: Ford (F) is scheduled to report July sales at approximately 9:30 a.m. EST. According to Kelley Blue Book, Ford may experience flattish sales, due to recalls and anticipation ahead of the launch of the new Ford Fusion. Nevertheless, sales of the new Ford Escape model appear to be tracking quite well. In its 2Q earnings release on July 25, Ford attributed its strong performance to Ford North America and maintained its regional growth outlook for 2012.

Technical Review: Ford Motor recently sunk to a 52-week low of $8.83, and is now off more than 15% YTD. Most technical indicators are pointing toward an oversold scenario, with the Relative Strength Index (RSI) falling to the 30-level. 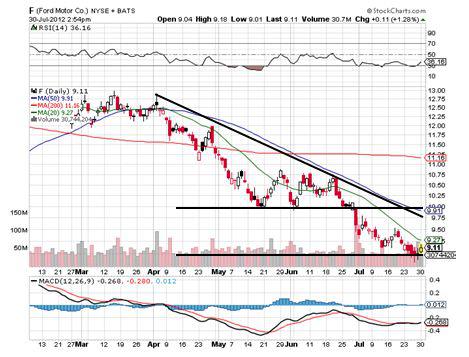 Overview: General Motors (GM) is due to report its July sales at approximately 10:00 a.m. EST. A redesign of the Chevy Malibu later this year could hold sales in check, while the company strives to maintain market share versus Toyota and other Asian competitors. Despite concerns on the macro level, GM is expected to deliver rising profits in North America, stemming in part from new model introductions later this year and full-sized pickup and SUV sales.

Technical Review: GM shares recently sunk to a new low since its November 10, 2011 IPO. The shares are currently at a support/resistance area near $19.50 -- a key level to watch following its July sales release. 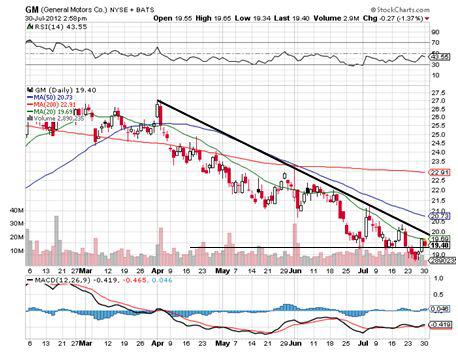 Overview: Toyota Motor (TM) will post its monthly sales report between 10:00 a.m. and 2:00 p.m. Toyota is seen delivering a Y/Y sales increase in the 22% - 30% range, thanks to the introduction of a newly-modeled Camry, coupled with pricing and incentive models designed to lure more North American customers.

Technical Review: Toyota Motor ADRs recently bounced back from a multi-year low to retake the 200-Day SMA near $75 -- a key level to watch in reaction to the numbers on Wednesday. Resistance is at $78. 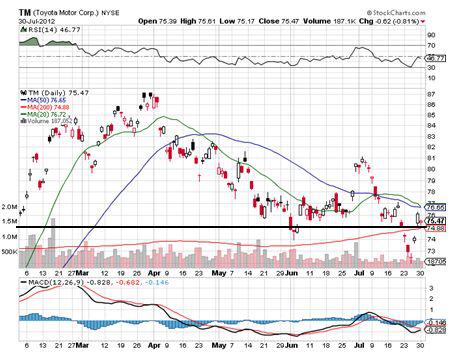 DISCLAIMER: By using this report, you acknowledge that Selerity, Inc. is in no way liable for losses or gains arising out of commentary, analysis, and or data in this report. Your investment decisions and recommendations are made entirely at your discretion. Selerity does not own securities in companies that they write about, is not an investment adviser, and the content contained herein is not an endorsement to buy or sell any securities. No content published as part of this report constitutes a recommendation that any particular investment, security, portfolio of securities, transaction or investment strategy is suitable for any specific person.