In Straight From the Gut Jack Welch said "If you're not #1 or #2, fix it, sell it or close it." His quote captured the spirit behind the development of the Profit Impact of Marketing Strategy [PIMS] studies by the Marketing Science Institute under the direction of Professor Robert D. Buzzell in the early 1970s. These two works have led nearly every CEO since then to believe that more market share means more profit.

I was the Associate Research Director of MSI in Cambridge, MA in the spring of 1969 when Bob Buzzell cut a deal with Sidney Schoeffler to expand his original study of General Electric (GE) divisions on a massive scale. You could say that I was there when PIMS was born. I left for Chicago Booth Business School that summer.

The PIMS data were used in hundreds of papers published over the next two decades. The first was an HBR article on The Impact of Strategic Planning on Profit Performance by Sidney Schoeffler, Robert D. Buzzell, and Donald F. Heany. A comprehensive review of the entire body of work is available in the PIMS Principles by Bob Buzzell and Bradley Gale published in 1987.

In 1983 I began to study the financial statements of public companies hoping to uncover the "real" relationship between market share and profits. This work culminated in Competing for Customers and Capital published in 2006. That book provides the theoretical underpinnings for these posts. One of the dominant principles is managing market share to optimize earnings. You can get a quick overview of this principle in my 14 minute audio slide show: The Role of Maximum Earnings.

In a nutshell, more market share is a good thing only up to a point. After a company reaches that point, profits begin to decline -- because the cost of the next share point suddenly exceeds its value. Where "that point" occurs depends on a host of things. And it may occur at a very low or a very high market share. But sooner or later that point will be reached.

In my last post I discussed air express carrier share in relation to their markets for customers as well its equally important relation to the market for capital. The metric I used was the value-sales differential - the difference between each company's share of value in stock markets and its share of revenue in service markets. For an overview of the theory and properties of this metric, see my audio 18 minute slide show Y'All Buckle That Seatbelt. I concluded the post with these four questions:

One way to explore answers to these questions is to consider the degree to which each company managed market share to optimize earnings. 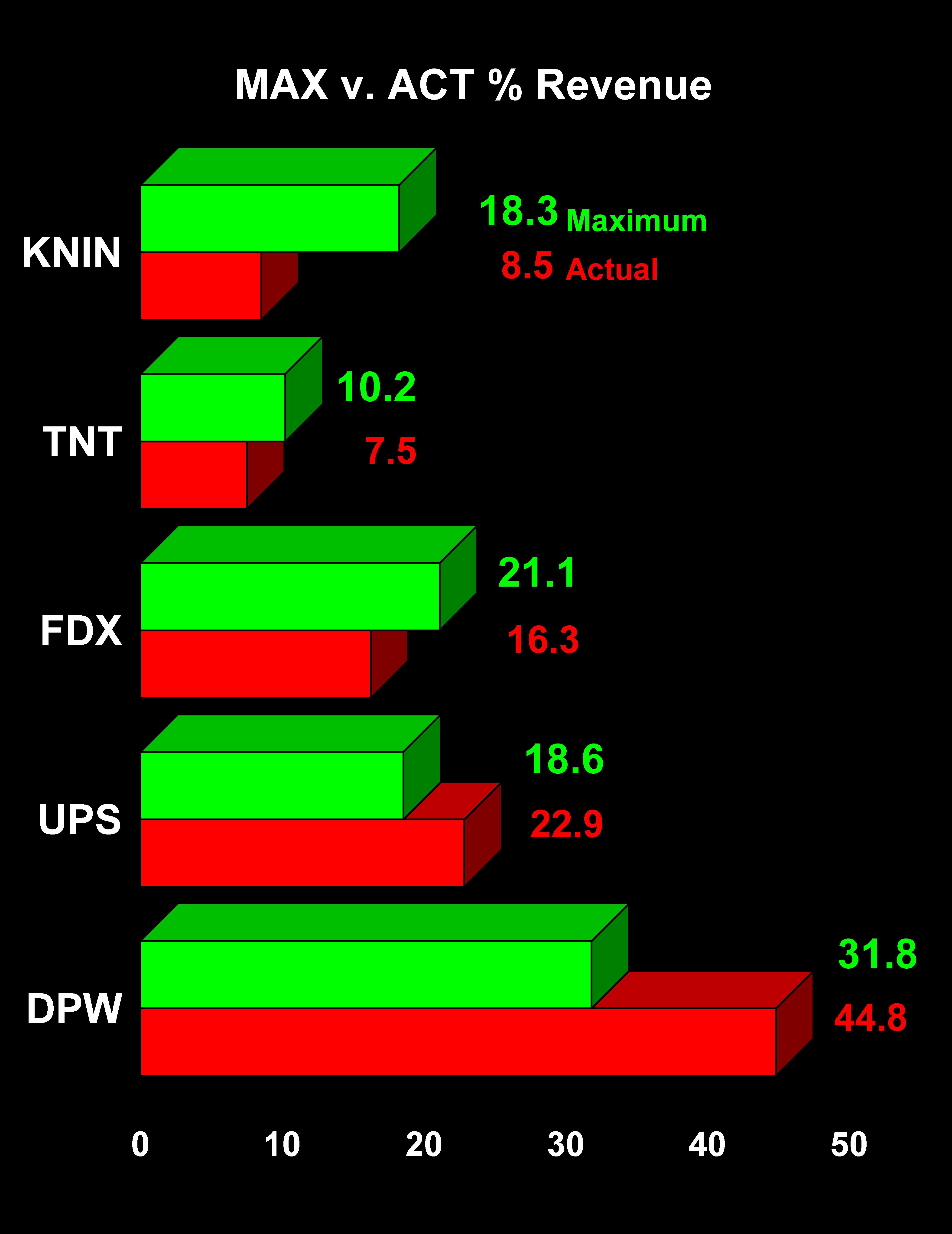 In ExecEd sessions most CEOs find it a fascinating theoretical exercise to discuss the pros and cons of maximum earnings market share. To them the concept even makes great cocktail party conversation. But when you translate those share numbers into sales revenues the sparks begin to fly!

Take the following chart of optimal sales revenues for the top five air express carriers as a case in point. Notice that the combined sales of these companies are close to optimal levels. Actual group sales were $216.8 billion, while optimal sales were $228.3 billion. Optimal sales were only 5% greater than actual sales. This is an extraordinary accomplishment for such a complex global industry. 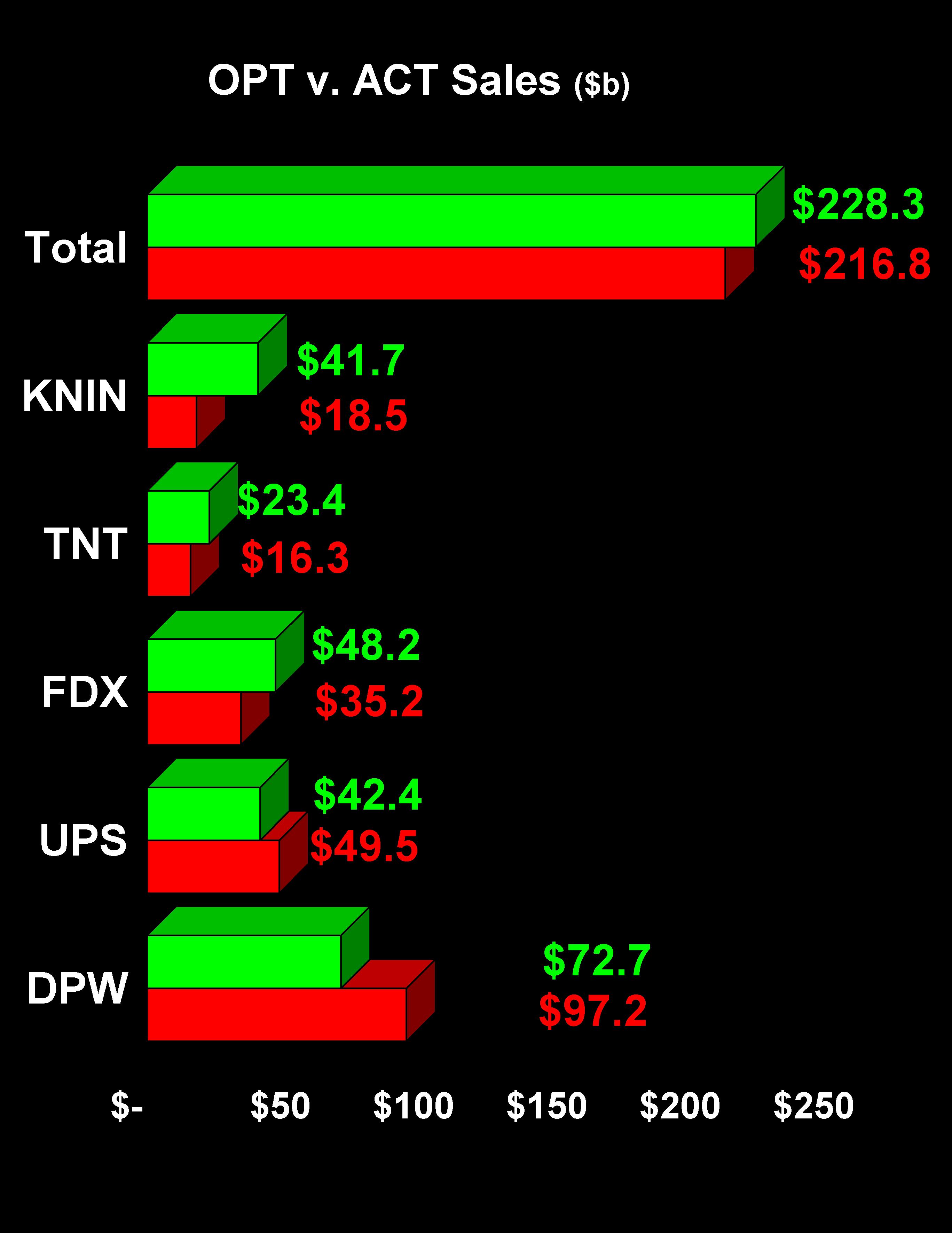 But would you dare tell Dr. Frank Appel that he should plan a sales cut from $97.2 billion to $72.7 billion -- by $24.5 billion USD -- in order to maximize earnings? Would any CEO willingly harvest that many sales for earnings? Sadly, that's what the senior managers of many legacy air passenger carriers are faced with in today's market.

It might be easier to convince Frederick W. Smith chairman, president and chief executive officer of FDX, that he should plan to increase sales from $35.2 to $48.2 billion - about $13 billion - either by organic growth or through acquisitions.

What do you think Klaus Herms the CEO of KNIN would think about the prospect of increasing sales by 56% from $18.5 to $41.7 billion USD?

Of course all of the strategic recommendations that follow from maximum earnings market share have a dramatic impact on costs. The theoretical results are reported in the following chart.

As you might expect, given the close proximity of optimal to actual group revenues, their combined total operating costs at actual and optimal levels are almost exactly the same - separated by only 1.3% or $2.2 billion USD. 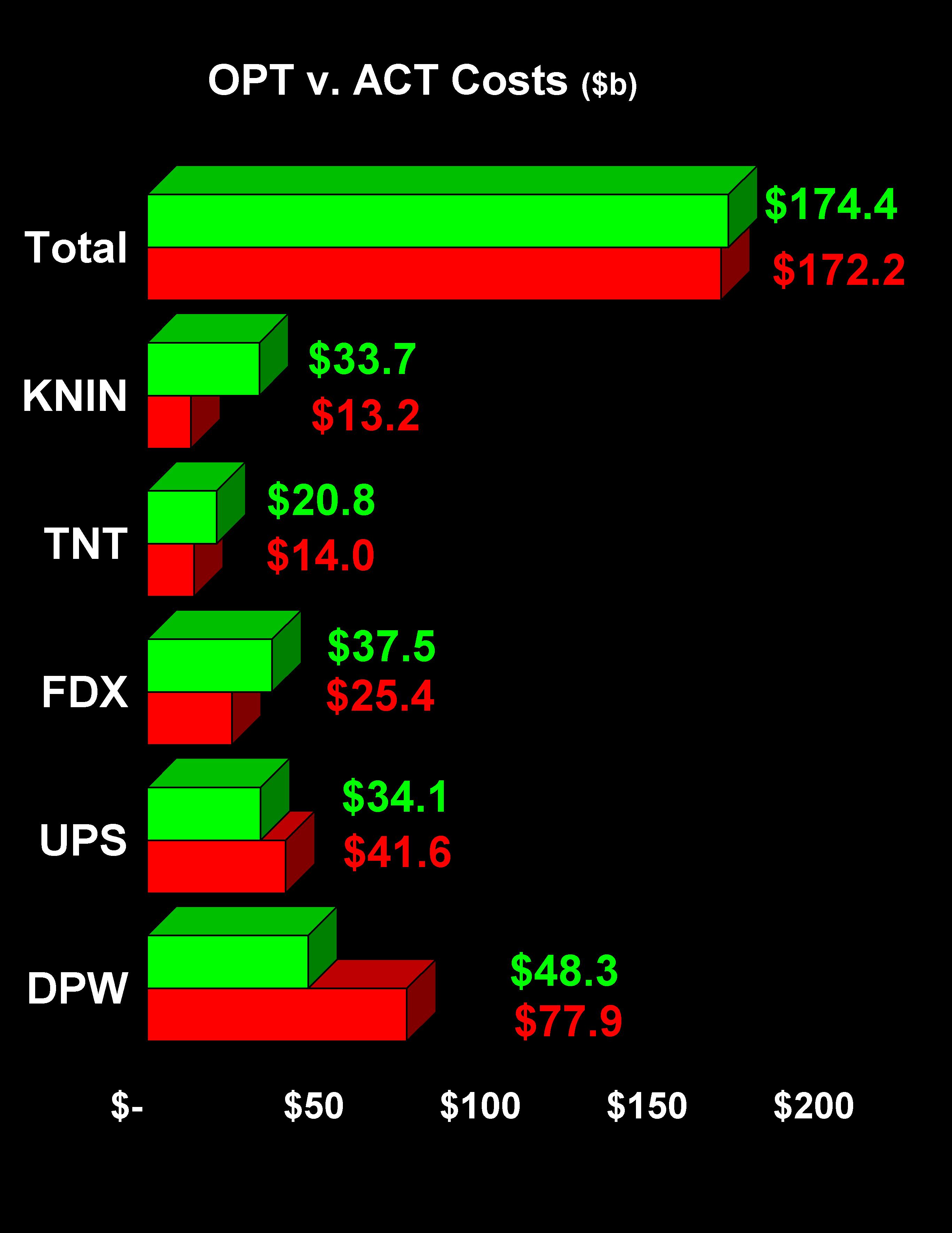 All of the above brings us to the bottom line - earnings after total operating expenses [EBITD]. The following chart tells the story of actual vs. optimal earnings for each company and the group.

Combined optimal earnings ($53.9 billion) of the five companies were $9.2 billion USD, or 17%, greater than actual earnings of $44.7 billion. The majority of that was accounted for by DPW's $5.0 billion short-fall. 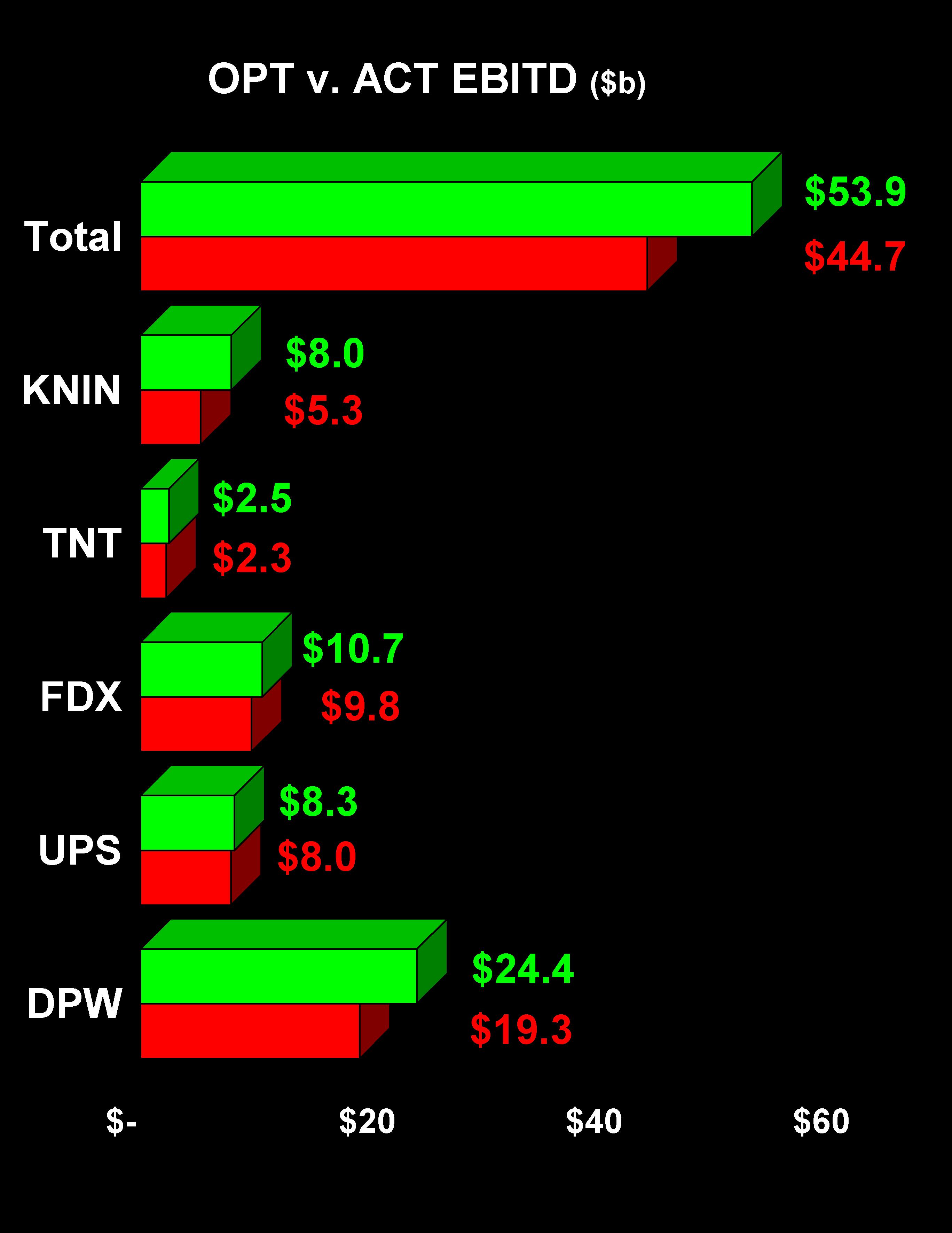 The company with the most to gain is KNIN. If the company invested in demand to the point that its revenues were optimized it theoretically would increase earnings by 34% from $5.3 to $8.0 billion USD.

If the Chairman of the biggest company in this group might not listen, why bother? Here's how I look at it. I am writing to plant one seed here and another one there. Hopefully these seeds will grow and eventually a senior manager will listen and consider taking the recommended course of action. Either out of curiosity, when the potential gains are worth the risk. Or out of necessity, when it has no choice. And it really doesn't matter what the motivation is so long as steps are taken in the right direction.

By the way, could it be that the value-sales differential of UPS was +20 points while that of DPW was -20 points partly because its actual earnings were five times closer to optimal than were DPW's?

Victor Cook
66 Followers
Victor Cook, Ph.D. is Emeritus Professor of Management at Tulane University. In addition to his university service, Cook has experience in senior management positions. Among those he has been for over thirty years, president and lead designer at thestyle.com Professor Cook began his academic career as a doctoral fellow at the Marketing Science Institute and Lecturer at the Wharton School. He moved to Cambridge, MA as Associate Director of Research when MSI was acquired by the Harvard Business School. He served six years as an Assistant Professor of Marketing at Chicago Business School before joining the Tulane faculty. Visit his blog: customersandcapital.com.
Follow
To ensure this doesn’t happen in the future, please enable Javascript and cookies in your browser.
Is this happening to you frequently? Please report it on our feedback forum.
If you have an ad-blocker enabled you may be blocked from proceeding. Please disable your ad-blocker and refresh.