The previous post in this series was Air Express Carriers: Mr. Smith Goes to Holland. In it I compared actual market shares with optimal ones for a combined FedEx (NYSE: FDX) and TNT [AEX: TNT] in a peer group that included the Swiss carrier Kuhne+Nagel [SWX: KNIN]; United Parcel Service (NYSE: UPS); and DHL [XET: DPW].

Here are the surprising conclusions from the analysis in that post:

If Fred Smith needs additional motivation to visit TNT in Holland to pursue a merger this earnings forecast should be it. The next question he might like to have answered is this: What would be the market cap of the combined companies?

To answer this question it's necessary to understand the three missing factors in financial valuation models.

McKinsey & Co.'s Valuation (4th ed.) by Tim Koller, Marc Goedhart and David Wessels is one of the most widely read management books on stock pricing. In fact, at the moment it's # 3 among the corporate finance books sold on Amazon. If you've read their book it's easy to understand the reason for its popularity. It conveniently gathers together decades of scholarly research and financial practice in a highly readable volume with carefully worked examples.

Despite the fact that so much scholarly research has been dedicated to refining the financial valuation model I contend there remain three critical missing factors:

These are strong assertions. But they also are well founded, as I hope the following discussion will show.

This key financial formula for free cash flow is given in McKinsey & Co.'s Valuation (page 62): 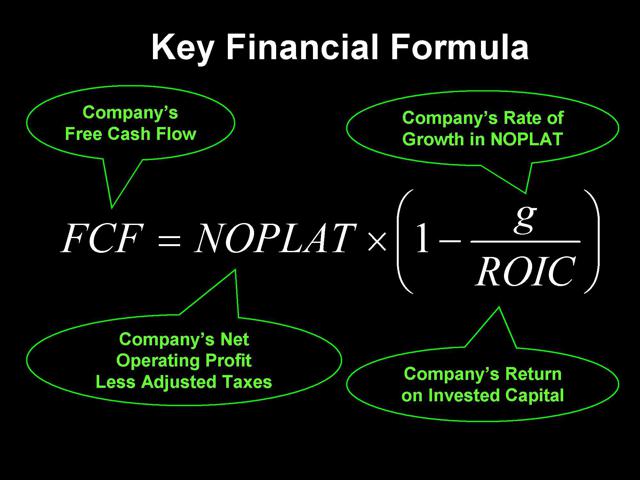 Is it surprising that the three factors listed above are missing from this key financial formula.? Not really. After all this formula is grounded in financial theory. But there are compelling reasons to reach beyond its disciplinary boundaries. Let's examine each of them in turn.

Every variable in the financial model of free cash flow is based on a stand-alone company. One might think this was a monopoly model. True, a company's free cash flow discounted by its weighted average cost of capital [WACC] can meaningfully be compared with the company's peers. But the model lacks interdependence between company and peer performance.

Companies in the same GICS sub-industry compete for many of the same customers as well as investors. Peer pressure in the intense competition for customers and capital has a direct effect on a company's free cash flow, but the model is not adjusted for these effects. It's interesting to note that neither the words "competitors" nor "peers" are indexed in McKinsey's Valuation.

This bottom-up approach also ignores what happens to the peer group as a whole, in say the case where the revenues of all competitors change. In other words, it fails to account for either "tailwind" or "headwind" effects on company revenues. Which can be substantial since top-line growth is a key to success. Three other McKinsey consultants assert in their 2005 paper on The Do-Or-Die Struggle for Growth that:

The experience of the large companies that we followed across the 1984-93 and 1994-2003 business cycles shows how difficult it is to grow without a tailwind. Although almost half of these companies maintained their status as growth giants through the two cycles, all except Wal-Mart had or built new businesses in health care or financial services - sectors that were hot in both cycles (bold type inserted, page 42).

One might wonder: If peer pressure and the tailwind factors are so important why are they missing from the financial valuation model? Part of the answer lies is the well known "silo" effect. Scholars in finance and marketing have built virtually impenetrable walls around their disciplines. What isn't so well known is the impact of the silo effect on business education in general and equity valuation in particular.

One tell tale measure of the silo effect can be found in the failure of scholars to provide interdisciplinary references in their research. Professors Rik Pieters and Hans Baumgartner studied cross-citations in their paper Who Talks to Whom? Intra- and Interdisciplinary Communication of Economics Journals. The following table reports citation counts by authors publishing papers in the top five marketing and top five finance journals in the three years 1995-1997 (pages 492 & 506).

One can only conclude from these data that marketing and finance scholars believe they have nothing to learn from each other. Considering these papers were written largely by faculty from the top business schools - the same faculty who write the textbooks that students in all business schools study -- it's should not be surprising to find that the tail wags the dog in financial valuation models.

A NARROW PERSPECTIVE ON VALUE

Free cash flow in the Key Financial Formula above is calculated by reorganizing the information reported in the income statement and balance sheet. For example, NOPLAT is net operating profits less adjusted taxes (from the income statement). Invested capital is inventory, accounts payable, property, plant and equipment (from the balance sheet). Return on these investments is NOPLAT divided by invested capital. The symbol "g" stands for the rate of growth in NOPLAT. Divide the free cash flow formula above by WACC-g and you have what Koller, Goedhart and Wessels call the "Zen of Corporate Finance."

We call the key value driver formula the Zen of Corporate Finance because it relates a company's value to the fundamental drivers of economic value: growth, ROIC, and the cost of capital. You might go so far as to say that this formula represents all there is to valuation. Everything else is mere detail (page 63).

Everything else is mere detail? Even though two-thirds of the market value of US companies is based on intangibles, the sources of this intangible value are not given even a passing mention in the Zen of Corporate Finance.

THE TAIL WAGS THE DOG

As you might expect there's a lot of variation in the percent of intangible value from one industry to another. The following bar chart shows the value of intangibles as a percent of total market value in 30 industries in 2003, right between the 2001 and 2008 market downturns. 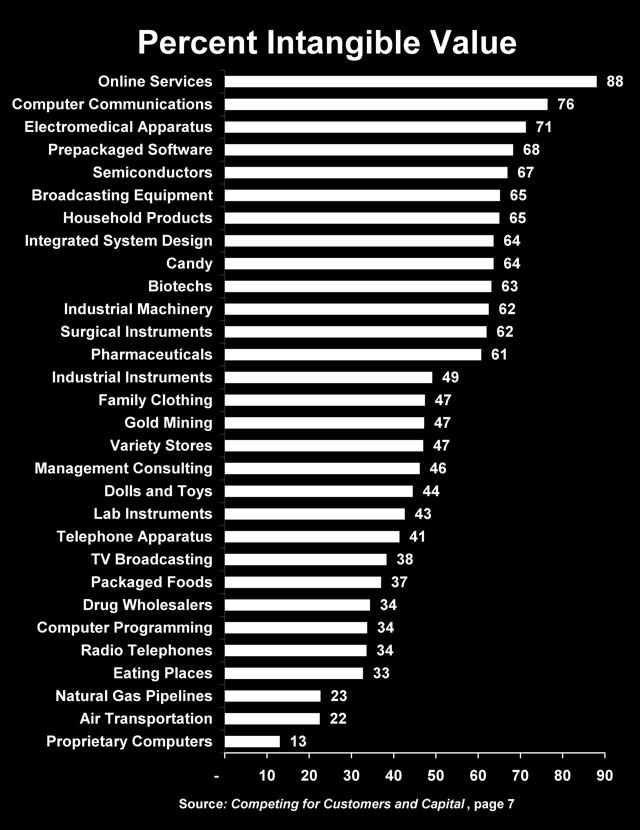 Total shareholder value in the sample of 479 companies on which this chart is based was $4.41 trillion. The total value of intangibles was $2.95 trillion, or 67%. The only place the financial model seems to fit comfortably is in gas pipelines, passenger air transportation and proprietary computers. But even in passenger air transportation nearly a quarter of the value is driven by intangibles.

Clearly in most of these industries the tail (tangible assets) wags the dog (market value) in the financial model of free cash flow. Of course it's true that FASB rules do not allow R&D, advertising and promotion [A&P] expenses or the costs of people to be treated as investments, because they are not assets in the financial accounting sense of the term. And I don't argue they should be treated as assets in that sense of the word.

What I do argue is these expenditures, though not assets in their own right, are the primary sources of a company's intangible market value and can be built into a new equity pricing formula. The expenditures on R&D, A&P and salaried employees appear in financial databases as Selling, General & Administrative expenses when this item is reported separately. For an overview of these sources of intangible value see my 12 minute audio slide show on Enterprise Marketing Expenses.

Perhaps equally mysterious is this last missing factor: Why does the financial model not calculate maximum free cash flow (or earnings) by optimizing operating expenses? Even in the finest detail presented in the appendices to Valuation there is no mention of optimizing operating expenses. I know this is a handbook and therefore cannot be expected to address issues at the state of the art. But expenses/cash flow optimization in equity pricing also is missing from the current academic literature as well.

A search of the JSTOR finance journals for combinations of (1) cash flow/earnings, (2) optimal/optimization and (3) value/price turns up only 7 papers. And none of these address valuation per se. Fifteen additional papers were netted in this search, mostly in management science and accounting journals. But these addressed issues in pricing components of a portfolio or optimizing investments in specific balance sheet variables like inventories or receivables.

I wrote Competing for Customers and Capital to build these three missing factors into the valuation process:

In my next post I'll show how a merged DFX and TNT could come within 18 basis points of maximum earnings market share by optimizing enterprise marketing expenses. At the same time I'll introduce two of three missing factors: Enterprise Marketing Efficiency and Relative Earnings Productivity.

Victor Cook
66 Followers
Victor Cook, Ph.D. is Emeritus Professor of Management at Tulane University. In addition to his university service, Cook has experience in senior management positions. Among those he has been for over thirty years, president and lead designer at thestyle.com Professor Cook began his academic career as a doctoral fellow at the Marketing Science Institute and Lecturer at the Wharton School. He moved to Cambridge, MA as Associate Director of Research when MSI was acquired by the Harvard Business School. He served six years as an Assistant Professor of Marketing at Chicago Business School before joining the Tulane faculty. Visit his blog: customersandcapital.com.
Follow
To ensure this doesn’t happen in the future, please enable Javascript and cookies in your browser.
Is this happening to you frequently? Please report it on our feedback forum.
If you have an ad-blocker enabled you may be blocked from proceeding. Please disable your ad-blocker and refresh.