To the first fact: 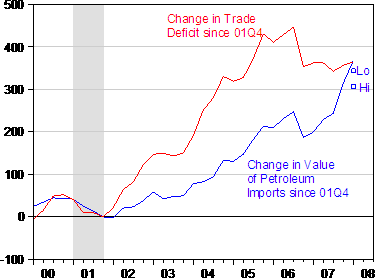 Figure 1: Change in the value of petroleum imports since 2001Q4 (blue) and change in trade deficit on a NIPA basis since 2001Q4 (red), in billions of dollars, SAAR. "Lo" and "Hi" denote alternate 2008Q1 levels of petroleum imports under the counterfactual of a $1 gasoline tax, assuming gasoline price elasticity between 0.3 to 1.0 (see text). NBER defined recession dates shaded gray. Source: BEA, GDP release of 26 June 2008, NBER and author's calculations.

One is tempted to ask how different matters would have been if we had enacted a gasoline tax and it had been put into place. Three years ago, I wrote in a Council on Foreign Relations special report [pdf]:

On the supply side, production is unlikely to rise strongly given the depletion of onshore reserves. In addition, production takes years to put into operation. On efficiency grounds, a gasoline tax would be preferable to higher fuel economy standards (see Congressional Budget Office, The Economic Costs of Fuel Economy: Standards versus a Gasoline Tax (Washington, DC: Congressional Budget Office, December 2003). In addition, a tax acts immediately, while standards would take longer to have an impact on consumption. A back of the envelope calculation can be useful in defining the potential impact of a gasoline tax. In 2004, the United States imported about $180 billion worth of petroleum and petroleum related products, equal to about one third of the trade deficit. Ignoring interaction effects, a $1 per gallon tax on gasoline would reduce annual petroleum imports by $10 to $25 billion dollars, or about 1.6-4 percent of the trade deficit. The calculation relies upon estimates of the gasoline demand elasticity of 0.3-1.0. Specifically, each barrel of oil yields approximately 19.5 gallons, and U.S. consumption was 19.4 billion gallons. Using CBO's preferred elasticity, a twenty-cent tax would save 40.5 million barrels of oil, reducing (at 2004 prices) $2.03 billion worth of oil consumption. There is also an increment to tax receipts, but it is very small -- less than $20 billion per annum initially.

Updating these figures, using the petroleum import deflator obtaining in 2008Q1, the implied reduction in oil imports -- had those taxes been put in place -- was between $24.4 to $61 billion, on an annual basis. The range of low and high import reductions are shown as boxes in Figure 1. Note that the calculation ignores the effect of lower U.S. demand on world oil prices, so the impact on the oil import bill is downward biased.

Of course, that is of little comfort, now that we are where we are. Oh, well. But there are still disasters we can avoid. From the conclusion to the same report:

The focus of this essay has been on the economic consequences of inaction. The longer we wait, the greater the likelihood of a global financial and economic disruption. Even absent a discrete crisis, hewing to the current course raises the chances of stagnant economic growth, if not recession, in the future. But there may well be other ramifications.

A cautionary note regarding America's current path is provided by Britain's loss of military and political primacy in the 20th century; that development followed a shift from creditor to debtor status. Similarly, a prolonged decline in the dollar's value and increasing indebtedness will erode America's dominance in political and security spheres. These trends threaten the dollar's role as the global currency that facilitates international trade and finance, something the United States has gained immeasurably from over the years. A weaker dollar also reduces American leverage in international financial institutions such as the World Bank and IMF. Finally, a diminished U.S. currency means that each dollar's worth of military and development assistance has less impact at precisely the time when the nation faces the greatest challenges. Those threats we ignore at our own peril. 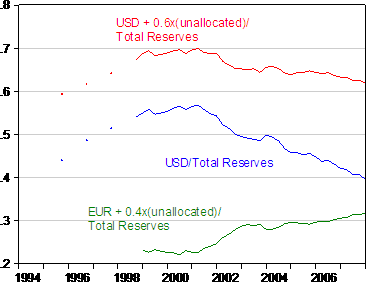 The conclusion I draw from this is that we should eschew the snake oil of extending the Bush tax cuts (and associated Laffer curve fantasies), which would likely exacerbate the dollar's decline, and take responsibility for the future.

Menzie Chinn
30 Followers
Menzie David Chinn is a Professor of Public Affairs and Economics at the Robert M. La Follette School of Public Affairs, University of Wisconsin. He is co-author of Econbrowser (http://www.econbrowser.com/).