I had a very engaging chat with a colleague earlier this evening. It started when he mentioned that he was planning on buying a new home. To this, I said "Good call on getting it now, as I expect interest rates to go up in the next 6 months". This grabbed his attention and he asked me "Why do you think so?" or something along the same lines.

As I drove home from work later, I decided that I’ll cover the core aspect of the chat in this topic, which is, "Inflation and tools to curb it". Simply put, inflation is a rise in prices. Over time, as cost of goods and prices increase, the value of the dollar decreases as you get less with the dollar than what you did a while ago. While the annual rate of inflation has fluctuated greatly over the last half century, ranging from nearly 0% inflation to 23% inflation, the Fed actively tries to maintain a specific rate of inflation, which is usually 3-4% but this often varies depending on circumstances.

Deflation or negative inflation occurs when prices actually decrease over time. Also note that deflation is not the same as disinflation, which happens when the rate of inflation decreases but stays positive (for example, a change from a 4% rate to a 1% rate). Measurement of Inflation: The Feds use two primary mechanisms to measure inflation, which are:

Consumer Price Index or CPI: CPI is a measure of the price of a set of goods and services. This "bundle" contains items such as food, clothing, gasoline, and even computers. The amount of inflation is measured by the change in the cost of the bundle. For example, a 5% increase in the purchase price of the bundle y-o-y implies a 5% annual rate of inflation over that period based on the CPI.

The "Core Rate" or the "Core CPI" eliminates certain items in the bundle which are extremely volatile, such as gas. As it removes items which are volatile and impact the cost of the bundle (in either direction) on a month-to-month basis, the Core rate is assumed to be a better indicator of inflation.

PPI combines a set of smaller indices across a broad spectrum of industries and measures the prices for three kinds of goods: crude, intermediate and finished. Generally, markets mainly focus on finished goods as these are better indicators of future CPI values. Though CPI is a more popular measure of inflation than the PPI; both actually matter.

Inflation worries investors, mainly because it eats into the value of their investments. For example, $100 today is not the same as $100 in 1 or 10 years. As the most basic example, $1000 in a 1-year CD returning 5% annually, implies ceding $1000 now for $1050 in 1 year. If the inflation rate that year’s 6%, then the purchasing power of $1000 has decreased by $60, the net $ at the end of the year becomes $990! And don’t forget that you pay capital gains on the $50 you made on the investment, thereby decreasing the value of the original principal further. This in one way implies, that an inflated economy gives people an incentive to spend all their money immediately versus investing it as the ability to purchase a larger bundle of goods today has better value than earned a year from today. Sounds crazy, doesn’t it?

The 3 most significant creators of inflation in the US (or any country) are: 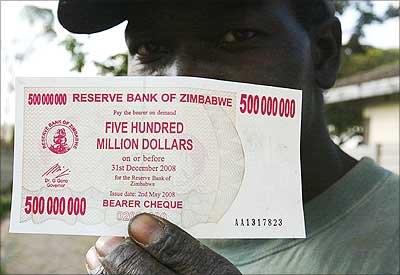 This is not funny, anymore.

Zimbabwe’s central bank recently issued $100 Billion banknotes in a desperate bid to ease the recurrent cash shortages plaguing the inflation-ravaged economy. The 100B$ bill still can’t buy a loaf of bread, but can instead buy only four oranges. It’s equal to just one U.S. dollar!!! Zimbabwe has seen an vicious economic meltdown since its independence in 1980, with the official inflation rate now at a staggering 2.2 million percent.

Feds fight inflation by controlling the economic growth through the monetary policy, which is simply the management of the money supply by the banks. Monetary policy aims to influence the overall level of monetary demand in the economy so that it grows broadly in line with the economy’s ability to produce goods and services.

Raising and lowering interest rates is the most common mechanism for implementing monetary policy. Interest rates are increased to moderate demand and inflation and they are reduced to stimulate demand. If rates are set too low, this may encourage the build-up of inflationary pressure; if they are set too high, demand will be lower than necessary to control inflation.

1. Raising short-term rates has the exact opposite effect as it discourages borrowing, thereby decreasing the money supply. This dampens the economy but in turn controls inflation. Whereas decreasing short-term rates encourages smaller banks to borrow more from the Feds and from each other, thereby increasing the money supply within the economy. Banks, in turn, give out more loans to producers and consumers, which stimulates spending and overall economic activity. Sound familiar? Heard of the subprime crisis?
2. Feds can tighten or relax banks’ reserve requirements requiring banks to always hold a % of their deposits with the Feds as cash on hand. This raising of the reserve requirements restricts banks’ lending capacity, thereby slowing the economy. Easing reserve requirements, on the other hand, stimulates economic activity.

IMPACT OF INTEREST RATES ON INFLATION:

Changes in Federal interest rates influences interest rates charged for overdrafts, mortgages, loans and savings accounts. This change then affects the price of financial assets such as bonds and shares as well as the exchange rate of the currency. This in turn affects the consumer and business demand and thereby the output. This then impacts the employment levels and wage costs - which finally influence producer and consumer prices and thus the CPI and PPI.

Changes in interest rates take time for a full impact on inflation. In the early 1980s it took Paul Volcker 2 years to bring inflation down to 3% from an all-time high of 13.2%. The 3 methods for controlling inflation impact the demand, and, in turn prices. However, a stronger dollar has the quickest impact.

A change in interest rates takes around 2 years to have its full impact on inflation, as it takes time for these changes to affect the interest payments made by consumers or producers. It takes even longer before these changes lead to changes in spending, and longer still for this spending to work its way all the way through the supply chain to the producers. Changes in production, in turn, lead to changes in employment and wages, increasing the unemployment rates and eventually changing the prices.

It’s impossible to predict with any certainty the exact size or timing of these influences as the effects vary based on factors such as the stage of the economic cycle. For example, the impact of higher consumer demand on inflation just after a recession is quite different than that after several years of expansion and boom.

A change in interest rates has an instant impact on consumers’ confidence, which influences spending immediately. To be practical, these interest rate changes take much longer to actually influence consumers’ and producers’ behavior, decisions and psyche. However, it provides a great platform and framework for the sea change.

Net-net, interest rates should track and pivot on the inflation targets for the future years, and not on current targets. They have to be forward looking and proactive versus stagnant and reactive.

Now to answer why I believe interest rates will go up in the next 6 months:

Two things that caught my attention were: “Growth is expected to pick up gradually over the next two years”, and,

On the fiscal stimulus, I believe the one that was done is having some effects, but it is somewhat early to make that judgment, and so, you know, I certainly think that we should consider all options. At the moment, I think it’s a bit premature.

The above data-points indicate that taking care of the financial system and the two stalwarts Fannie Mae (FNM) and Freddie Mac (FRE) is the first order of business for the Feds the rest of the year. But then reality will strike, for sure, as interest rate hikes are inevitable. Don’t forget, by then, we’ll also have a new President and a new coterie driving our economic and fiscal policies. I can only see interest rates (only and hopefully not taxes) going up from there on.

What do you think?

Stockerati
27 Followers
Stockerati (http://Stockerati.com/) is an engineer and student of science by training and practice. He's a self-taught investor and has been applying a sense of logic, induction and scientific means to craft out his portfolio and investments for quite some time. He's based in Seattle, WA and has worked for 10+ years in the hi-tech industry. Investing and stocks are his passion, hobby and just like everyone else, he believes in turning this hobby into something very rewarding. Stockerati runs a successful blog at Stockerati.com (http://Stockerati.com/) where he shares his screenings, analysis and view points on stocks, the economy, wall street and international markets regularly. His goal is to be the missing link that investors like him face today. He doesn't day-trade, swing-trade or deal in options or futures. He's very inspired by the principles of value investing but does not have the patience to wait that long for the returns. His singular goal is to make reasonable profits through short to mid-term trades. Stockerati is an exponent of trend investing. Through his proprietary methods he strives to detect early trends through patterns and signals in the market place and applies them to pick his investments. He's been reasonably successful in his endeavors. He believes in complete transparency and shares all his research and conclusions with the world. Stockerati's strategy is around detecting trends early, always staying ahead of the curve and timely entry & exit, while securing great gains.