When Stephen Elop took the reins of Nokia (NYSE:NOK), the company was flying high, contrary to what Americans may think. The company had 60% market share in smartphones, was selling over half a billion phones, and had potentially the next best thing in its pipeline. Granted, Nokia's U.S. operations were non-existent and the past CEO was ousted for poor performance, but I would trade poor performance with the 300 million consumers in the U.S. for being the leading cell phone maker for the other 6.7 billion people in the world. That is exactly where Nokia was on April 22, 2010, when Stephen Elop came to the show.

At first, I thought Nokia's woes were the result of poor products and a company that was slow to the uptake on a number of industry-wide trends. It was only after reading Tomi Ahonen's article on the "19 Reasons Stephen Elop Must Go" that I realized how wrong I was. Nokia, in fact, was the innovator, and it was Stephen Elop that destroyed it.

Tomi Ahonen, a former executive at Nokia (prior to its woes) and currently a telecom consultant, is a prolific writer and I highly recommend you also read his article (much of what I say comes from his writings). His words confirmed many things about Nokia that I knew and many that I didn't and I will explain the most horrifying things that Stephen Elop has done since he took office. The more I read about this, the more it truly saddens me how badly one man can make a company fall so hard.

There are three things that lead to success or failure for smartphone makers: your platform, your carrier relations and your sales relationships. Stephen Elop destroyed all three.

While Stephen Elop pushed the company toward Microsoft (MSFT), he destroyed every platform Nokia had spent years to develop: Symbian, MeeGo and Meltemi. He didn't bother making a slow "transition," instead he burned the bridges when he released his "Burning Platforms" memo to the world. In doing so, he destroyed millions in future sales from Symbian phones that Nokia would have sold (see the sales drop after he sent his memo - "Elop Effect.") He also killed any chance of going back to the other platforms if Windows Phones did not do well. 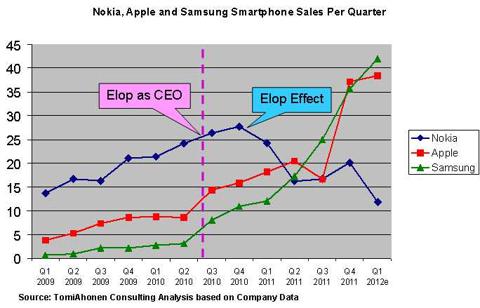 Nokia released one MeeGo phone before Elop killed it, the N9. In 2011, Nokia sold by many calculations close to or well over 1 million N9s. That one phone sold close to or more than the entire Windows Phone lineup. It received such good reviews that it beat Samsung and HTC phones in satisfaction. Yet, Nokia did this without millions in advertising and promotions. Elop even refused to allow this phone to be sold in the U.K. or the U.S. Why would any CEO with the best interests of his company prevent a profitable high-margin product from being sold?

The Biggest Customer Base

Throughout the world, the vast majority of handsets are low-end smartphones or feature phones, and this is where Nokia rules. On these low-end phones, operating systems, like Google (GOOG) Android, did not run very well, at least until earlier this year prior to the release of low-end processors by semiconductor companies competing with Qualcomm.

The low-end smartphone market had terrible user experiences - as someone who was developing low-end smartphones two years ago, I saw this first hand. Nokia was trying to fix that. It was developing Meltemi, which was made to run on low-end hardware. (Windows Phone can't scale that low and doesn't even offer features important to people who buy low-end phones).

Yet, months from release, Elop closed development. What?? This platform had the potential to be the driver of smartphone adoption across the developing world (as opposed to Android) and yet Elop decided to stop it.

Lastly, Symbian as a platform was not dead. Sure, it had gotten behind the times, but Nokia engineers were hard at work making a major update when Elop decided to scuttle the entire platform. On top of this, at the time, the Nokia Ovi app store for Symbian had 40,000 apps available and one of the widest user bases of any platform (yes even more than Apple). Again, why would any competent executive decide to destroy a platform carefully built over the past five years?

The worst thing this did is put Nokia's fate in the hands of others. Nokia gave up its platforms and became "just another OEM."

Died with the Carriers

Unlike Elop's upbringing as a Microsoft exec, where it is relatively easy to bully its millions of small customers around, forcing adoption of its newest products, handset sales are controlled by 600 carriers with 25 carriers controlling over half of the world's mobile accounts. Handset makers spend years cultivating and wooing these carriers as you keep them or die. This is one of the few things where Research in Motion (RIMM) still has strength, in fact.

The carriers, not Nokia, decide what is sold on their networks and the prices they are sold at. They subsidize the pricing and are the ones who pay the manufacturer the majority of its revenue. For example, Apple (AAPL) gets $650 per iPhone even though as a customer you may pay $199 up front.

Before Elop, Nokia had the best relationships in the industry. Yet, Elop over his tenure destroyed these relationships with one bad decision after the other. Nokia learned to consult with carriers first before making major decisions, like eliminating MeeGo and Symbian, but this changed with Elop.

It began with the ending of Symbian and MeeGo and most importantly with the Ovi store. Nokia in essence shifted from the Ovi store, which carriers received a cut of the sales from through integrated carrier billing to the Windows platform turning a profit center with the Ovi store into a cost as now customers use data with no money coming to the carrier.

Even more tragic, NTT DoCoMo, the major Japanese carrier and the world's telecom innovator (yes, it was the first 3G network, first app store provider, and first WiFi phone supplier among others), was betrayed massively. Just two months before Elop's memo, NTT assured its long-term intentions to develop Symbian. Meaning, any premium phone makers, like Sharp, Panasonic, and Fujitsu (they are big makers in Japan) hoping to sell in Japan would have to run Symbian, meaning millions of license sales for Nokia. Within two days of Elop releasing that memo, NTT DoCoMo changed to Android.

Do This and Die, that Simple

Sales channels put the final nail in the coffin. While the product mistakes and carrier relationship handling were terrible, Elop screwed up the last thing that could keep Nokia's sales afloat. Retail sales drive Nokia's sales. While other stores have some retail outlets, Nokia is almost exclusively dependent on relationships with sales outlets to make sales.

The salespeople on the front lines are your most important asset. The product they push is the product that sells. Even customers with a predetermined decision can be shifted by how hard a sales person pushes (within reason). This can ultimately lead to millions of phones being sold - or not.

The worst news for a sales person is returns. Salespeople hate dealing with returns. In almost every case, it's a lose situation - returning customers take time, energy, and eat into their commissions. Salespeople work twice as hard for no more money or at worst, for zero money. If a customer returns a product, that means you have to pay back the commission you earned last week through a cut in your paycheck this week, putting you, the salesperson, in a hole.

Sales reps learn very quickly what phones have the most returns and discourage customers from buying those. It's self-preservation; sales people live on sales, and returns destroy them. The Lumia line of smartphones? The highest return rate for any Nokia smartphone, ever, according to Ahonen.

Salespeople don't bother pushing Nokia phones and you can see it in the poor sales for Lumias. Elop has done very little to fix the problem. Instead, he blames the sales channel. He hasn't looked to see how he can make it better, instead he says it is the problem.

How can you run a successful business when you are trying to wage war on the people selling your product?

So what can be done? The first step, as Tomi Ahonen says, is to fire Elop - a step I agree with. He is the one responsible for alienating its major partners and there is very little chance of seeing this change until he is gone. He has shown he just doesn't get telecom. Success in telecom is so different than the software industry that I can understand why Elop doesn't understand it, but that is still no excuse. He needs to be fired and Nokia needs a CEO who can mend the relationships with carriers and sales people.

The shift in products is nearly irreversible, Nokia has basically lost control of its future by giving up its own platform, but first thing is to stop making Microsoft phones. The Windows Phone platform is so far removed from Nokia's customer base it just doesn't make sense. In many developing countries, Windows is not used or used sparingly, and the closed system is a nonstarter - seriously - Bluetooth only works with other Windows phones, and no other platforms. People love sharing music via Bluetooth in developing countries, and I even saw someone return a Windows phone purely because of this.

Nokia needs a (competent) visionary who can help Nokia get back to where it was. Nokia is still the brand loved by users around the world; it speaks to quality, durability and people even have emotional attachments to it. But the products are quickly being outdated and loyal customers are looking elsewhere. Put the Nokia brand with a better platform and you will have a winner in many parts of the world. The question is, will someone in Nokia do this in time?

Additional disclosure: Reza Handley-Namavar is the CEO of Dream Mobile which competes with Nokia in several of its markets.

Reza H. Namavar
31 Followers
Reza has 8 years of investing experience. His primary expertise is investing in consumer and technology stocks with a bent towards affordable growth and well-managed companies. He is founder of Dream Mobile a company developing affordable smartphones in the African market.