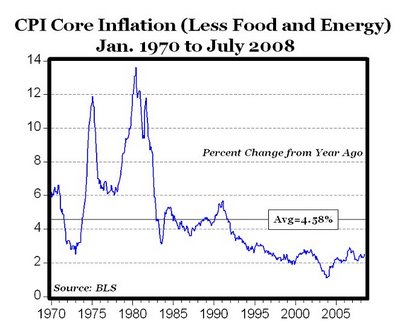 How can monetary base growth slow for seven straight years without pushing inflation down? If you agree with Friedman, it should have caused a decline in inflation, but every measure of inflation is higher, not lower.

What about annual core inflation? It's been flat for 10 years now at about 2%, see chart above, is lower now than it was several years ago, and less than 50% of the long-term 4.58% average.

As I suggested before on several posts, unless and until core inflation rises like it did in the 1970s (see chart above), inflation can't be "a clear and present danger," as Brian suggests. 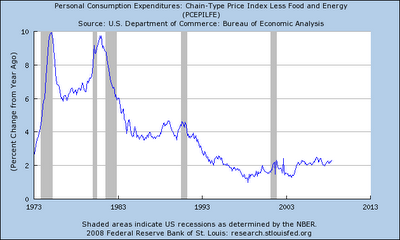 The chart above shows annual inflation since 1973, calculated from the BEA's quarterly personal consumption expenditures price index, less food and energy (data here), showing 15 years of extremely stable inflation at around 2%. In fact, it's almost as if the Fed has been following a 2% inflation target since 1993 (based on this price index), and provides more evidence that core inflation is low and stable, and nothing like the inflationary 1970s.

Mark J. Perry
939 Followers
Dr. Mark J. Perry is a full professor of economics at the Flint campus of The University of Michigan, where he has taught undergraduate and graduate courses in economics and finance since 1996. Starting in the fall of 2009, Perry has also held a joint appointment as a scholar at The American Enterprise Institute. Perry holds two graduate degrees in economics (M.A. and Ph.D.) from George Mason University and in addition, and has an MBA degree in finance from The University of Minnesota. In addition to an active scholarly research agenda, Perry enjoys writing op-eds for a general audience on current economic issues and his opinion pieces have appeared in most major newspapers around the country, including USA Today, Wall Street Journal, Washington Post, Investor’s Business Daily, The Hill, Washington Examiner, Dallas Morning News, Sacramento Bee, Saint Paul Pioneer Press, Miami Herald, Pittsburgh Tribune-Review, Detroit News, Detroit Free Press and many others. Mark Perry has been best known in recent years as the creator and editor of one of the nation’s most popular economics blogs, Carpe Diem. Professor Perry has written on a daily basis since the fall of 2006 to share his thoughts, opinions and expertise on economic issues, with a strong emphasis on displaying economic data in a visually appealing way using graphs, charts and tables.