History has repeatedly taught us that the best time to buy Apple is when the bearish sentiment in the stock has reached the pinnacle of extreme pessimism. When every guest on CNBC is calling for the imminent demise of Apple, when every headline is making a case for why Apple has peaked, and when the stock continues to slide by over a 2% a day right in the face of a market rally, that's when you know it's time to buy.

The last two times we publicly advised investors to buy Apple was on Thursday, May 17, 2012 when Apple was at $530 a share and on Friday, June 17, 2011 when Apple was at $320 a share. In both cases, Apple bottomed out on the following trading session and then went on a 30%+ rally. We have only ever published five public buy recommendations on Apple and each one was published within a few days of Apple's final bottom. We have never missed a long-term price-target on Apple.

Today, Apple has reached one of those very rare buy points. At $630 a share, Apple's stock has the potential to rally over 60% over the coming 12-month period. And that's assuming Apple merely continues to trade at the same depressed valuation it has been trading at over the last several quarters now. If Apple's valuation were to somehow improve, we can see Apple reach $1000 a share much sooner than many expect - perhaps even as early as next July.

The simple truth is that despite all of the sensationalist rubbish surrounding the launch of iPhone 5 ranging from "Mapplegate" to purple hazes or scratched iPhone cases, Apple is selling literally every iPhone 5 that it can make in what has been called the most aggressive international roll-out in consumer electronics history.

What's more, based on the expected smartphone growth rates estimated by IDC and Gartner, the consensus among analysts is that Apple will sell somewhere between 160 million to 180 million iPhones in 2013. This expectation is further supported by the very aggressive capital expenditures Apple has been making ahead of this international rollout as well as the capital expenditures Apple plans to make next year.

Yet, assuming that Apple delivers at the low end of the range, the company will likely report just a little over $66.00 per share in 2013. At a 15 P/E ratio, that would put Apple at $990 a share before the end of next October.

In the post-financial crisis era, Apple's P/E ratio peaked at 35.87 in fiscal Q4 2009. Since that time, the stock has underwent a very long multi-quarter process of P/E compression until things sort of flattened out in fiscal Q4 2011. Since that time, Apple's P/E ratio has more or less stabilized and has been well contained within a range of 14.5 to 15.5. One can very safely assume that Apple will continue to trade around this level for the foreseeable future. It's right near the S&P 500 average and a fitting valuation for the world's only mega-cap growth company. 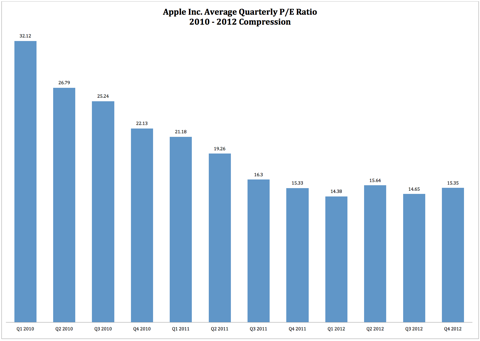 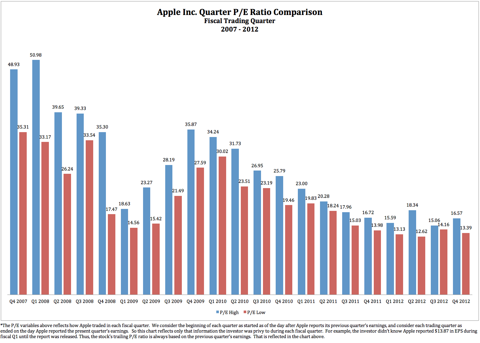 This flattening out of Apple's P/E compression curve clearly indicates that the market believes Apple's true value relative to its actual earnings stands at roughly a 15 multiple. That is the level at which the market has been very comfortable pricing shares of Apple on a very consistent basis over the past year and a half.

Go back to Apple's fiscal Q1 2012 for example. The day before Apple reported earnings, the stock was trading at a 15.4 P/E ratio. Apple reported one of the biggest earnings blowouts in the company's history which caused Apple's P/E ratio to fall from 15.4 down to 12.5 over night.

As a result of this collapse in the P/E ratio, Apple saw one of the biggest rallies in its history which aimed to correct Apple's overly depressed valuation. The stock went on an almost vertical parabolic rally from $420 a share up to $644 in just two and a half months time. This rally helped bring Apple back to its center of gravity near the 15-P/E ratio level.

In fact, since June 2011, any time Apple's valuation fell substantially below a 15 P/E ratio, the stock found a lot of buying interest which helped bring Apple up to fair value at 15x earnings.

Yet, aside of the issue of valuation, Apple is now also technically oversold and trading at a level that will likely constitute the low-end of the range for the stock over the next few months. While Apple may very well revisit these lows at some point in time over the coming weeks, it is still sitting near the low-end of the range. That's what makes Apple an extraordinary buying opportunity today.

Buying Apple down here at $630 a share will make any fund manager's year. It's an easy 60% gainer over the next 12-month period. Apple should be a top holding of the average fund, and smarter fund managers are riding this thing all the way to the bank. It is pretty much a no brainer at these levels.

In both years, the sentiment reached a bearish extreme peak despite the fact that Apple was busy selling millions upon millions of iPhones and showing no signs of actual weakness whatsoever. In both 2011 and 2012, the sentiment was driven by the same sort of abstract and non-concrete b.s. we basically see in every sentiment driven sell-off in Apple. Instead of pointing to any actual or real issues impacting Apple's sales or margins, the attack on Apple has been largely very vague and very general at best.

In 2011, the bears argued that the passing of Steve Jobs meant the death of innovation at Apple. And as an example of this, the bears pointed to Apple's lack of innovation with the so-called "disappointing" iPhone 4S. While Wall Street was disappointed with the iPhone 4S, the rest of the planet was busy buying the device in droves. During the launch quarter, the iPhone 4S represented 1 out of every 4 smartphones sold which was by far Apple's biggest penetration within the smartphone space. Even though the form factor didn't change, the iPhone 4S was far more successful than the iPhone 4 in terms of penetration within the smartphone market.

In 2012, we're seeing the same exact nonsense. Wall Street by all accounts appears to be largely disappointed with the iPhone 5. The bears have argued that Apple's fumble with its Maps App suggests that the company lacks leadership without Steve Jobs. A fund manager even argued that the iPhone 5 felt more like a toy instead of a smartphone, and that his personal assessment somehow suggests that Apple will struggle to sell iPhone 5's.

Meanwhile, Apple is busy selling every iPhone 5 it can make and has already suggested that it plans to sell 50-60 million iPhones this quarter which would drive EPS up to nearly $20.00 or 44.2% higher than the year-ago period. Yet, instead of breaking out above $700 a share in an effort to stay ahead of P/E compression that will surely hit the stock once Apple reports earnings, Apple has tumbled 12% off of its highs. Apple is setting up to repeat what happened in January 2012 and it seems a lot of people are just sitting there twittling their thumbs.

In 2011, we had Steve Cortez leading the bear raid against Apple. Steve Cortez was the most prominent Apple bear with his admitted big short position on the stock that he was not shy about disclosing pretty much every day on Fast Money. On November 25, 2011, Apple's stock reached $363.50 a share. Exactly four months later, Apple's stock-price was 75.17% higher and we never heard from Steve Cortez again.

While Steve Cortez lead the bear raid in the fall of 2011, Doug Kass of Seabreeze Partners is leading the bear raid in the fall of 2012 today. It will be interesting to see if Doug Kass has any comment about his Apple short position or any comment about his commentary on why Apple is peaking when the stock rallies to $1000 a share next year. Like Cortez, we probably won't hear from Kass until he comes out with another recommendation to short Apple at $1000 a share.

Apple is very cheap at these levels and is getting very close to a final bottom. While it could very well rebound and then struggle a little after earnings, the fact of the matter is, Apple at $630 a share presents us with an extraordinary buying opportunity. The stock is headed straight for $1000 a share. Don't get too caught up in bearish sentiment. It's time to buy Apple.

Disclosure: I am long NASDAQ:AAPL. I wrote this article myself, and it expresses my own opinions. I am not receiving compensation for it. I have no business relationship with any company whose stock is mentioned in this article.

Andy Zaky
2.87K Followers
Andy Zaky has been a stock investor for over 17-years now and has a Juris Doctorate from the UCLA School of Law-- a top 15 law school in the United Stated.  Andy's focus is in technology stocks.  He has closely analyzed Apple, Google and Amazon since 2005.  Andy currently runs a variety of model portfolios at Bullish Cross and plans to launch a U.S. Domestic conservative Long-Short highly-diversified equity fund that closely tracks the S&P 500.  The model for that fund has signfiicnatly outperformed the S&P 500 since the portfolio launched in 2015 despite being diversified in at least 450 stocks at all times, no derivatives and no single stock comprising of more than 5% of the portfolio's AUM at entry as of September 2017.