Based on the advance report on manufacturers, shipment, inventories and orders, the Commerce Department reported on Wednesday that new orders for long-lasting U.S. manufactured goods, a key indicator of the national manufacturing sector, jumped 1.3% or $2.9 billion to $219.3 billion in July ’08.

The consensus had expected a 0.7% decline. This was the third consecutive monthly increase and followed a 1.3% June increase. Excluding transportation, new orders rose 0.7% and are up 3.6% on a y/y basis. If we exclude defense as well, new orders increased 2.8%.

July shipments of manufactured durable goods increased $5.3 billion or 2.5% to $218.3 billion. This followed a 0.9% June increase. 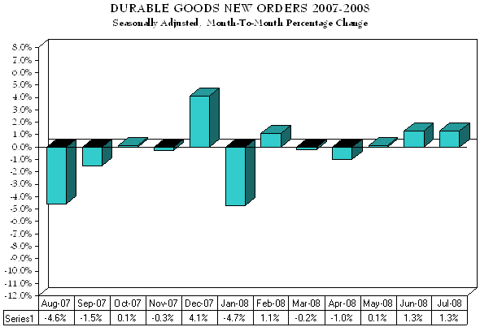 As we have pointed out on more than one occasion, the claim that the U.S. economy is currently in recession is in direct contradiction with the healthy trend in business investments. The discontinuities in the data simply reject the validity of the argument. Analysts had expected a 0.5% drop in durables orders excluding transportation. But, even when volatile transportation orders get stripped out, we get a 0.7% demand increase. The shipments component showed a 2.5% advance versus the previous month’s 0.9% increase. Core shipments of capital goods have increased consistently in the last several months, helping in the process sustain productivity growth, thus influencing GDP positively.

While I agree the parameters of defining recession are quite different ; the most simplistic one, I believe, would be applying the term recession as an encompassing parameter of the economy in its entirety, rather than just sector-selective. Once this principle is applied, then we are certainly not receding. Look for a Q2′08 upward revision.