AVEO (NASDAQ:AVEO) is down 45% in less than 3 months due to uncertainties around its lead program, tivozanib. Tivozanib was recently submitted for FDA approval in renal cancer based on positive phase III data showing superiority over the approved drug, Nexavar. Although tivozanib led to superior progression-free survival (PFS) and was substantially safer than Nexavar, investors are concerned about Regulatory and market positioning risks.

The regulatory risk stems from concerns about a negative overall survival trend in the phase III trial. This might cause the FDA to require additional data or even worse, additional studies before approval. This uncertainty will be resolved next year, following FDA's decision to approve or reject tivozanib. Despite the inferior overall survival trend, I believe there is still a high (75%) likelihood of approval for reasons I will discuss below.

From a market positioning standpoint, tivozanib will have to compete with 2 similar drugs that are already approved for 1st line renal cancer. Pfizer's (PFE) Sutent is the market leader, approved in 2006. GSK 's (GSK) Votrient was approved in 2009 and is expected to steadily take market share from Sutent.

Originally, I was more worried about tivozanib's market position, as AVEO's trial did not include a comparison with Sutent. In a post published earlier this year, I suspected that based on the available data at the time, tivozanib was safer but less effective than either approved 1st line drugs or Inlyta, which was in phase III. Two recent data readouts imply my initial assessment was wrong and that tivozanib is indeed a best-in- class drug.

The regulatory risk centers on FDA's concerns over an inferior survival rate for tivozanib compared to the control arm (77% vs. 81% survival at 1 year). Although several renal cancer drugs have been approved based on PFS without a survival advantage, this is the first time where a PFS advantage is followed by a negative survival trend.

Although AVEO's explanations sound more than plausible, some analysts are still concerned about FDA's reaction. In particular, they claim the FDA cannot ignore even a non- statistically significant negative survival trend.

Tivozanib's biggest selling point is its benign safety profile, which includes dramatically fewer side effect compared to Sutent and Votrient. While comparing efficacy endpoints between different trials is considered problematic, doing so with safety profile is considered more reliable. Consequently, when given the choice, patients are likely to prefer tivozanib assuming it is at least as effective as Sutent/Votrient.

Interpreting tivozanib's efficacy is trickier as it has never been directly compared to standard treatment lines. In its phase III, tivozanib led to a median PFS of 12.7 months vs. 9.1 months for Nexavar. Numerically, this compares favorably with historical data for Sutent and Votrient (~11 months), but Nexavar's performance in that trial was substantially better than its historical data (~5.5 months). This prompted me to suspect that patients in the tivozanib trial enrolled patients with better prognosis and therefore, tivozanib's numbers should be taken with a grain of salt.

In September, GSK reported results from a phase III trial comparing Votrient vs. Sutent in 1st line renal cancer. Both drugs performed worse than previous trials, with median PFS of 8.4 and 9.5 months for Votrient and Sutent, respectively. This result keeps tivozanib's 12.7 months as the highest PFS ever to be achieved in renal cancer. Although there is a reasonable chance tivozanib is indeed more effective, there is still no direct proof for that.

Earlier this month, Pfizer reported that Inlyta failed to demonstrate superiority over Nexavar as 1st line treatment, which was very surprising given the drug's strong performance in 2nd line patients. Actual data were not disclosed but it seems likely that the Nexavar arm demonstrated a similar PFS similar to that observed in AVEO's trial, thus alleviating concerns about a "better" patient population in tivozanib's study.

Combined, these readouts removed a major overhang and support tivozanib as a potential best in class.

The best benchmark for Tivozanib's opportunity is Sutent, which had ~$1.2B in sales in 2011. Sutent derives the majority of sales from 1st line renal cancer, but it is important to note that not all patients are treated with Sutent and some patients discontinue treatment due to side effects. Therefore tivozanib should generate higher sales per patient based on longer average treatment duration.

Using a sales multiple of 5 and a discount rate of 8%, which reflects the low commercial risk, AVEO's valuation is ~770M assuming tivozanib is approved next year. Applying a probability of approval of 75%, the risk adjusted worth of AVEO's renal cancer franchise is ~$575M, 70% higher than its current market cap of $338M. This figure assumes zero value in case of a regulatory setback. It also excludes additional indications for tivozanib as well as AVEO's pipeline (ErbB3 and RON antibodies), which is still in early stage.

We are initiating a new position in AVEO given the recent re-risking events. 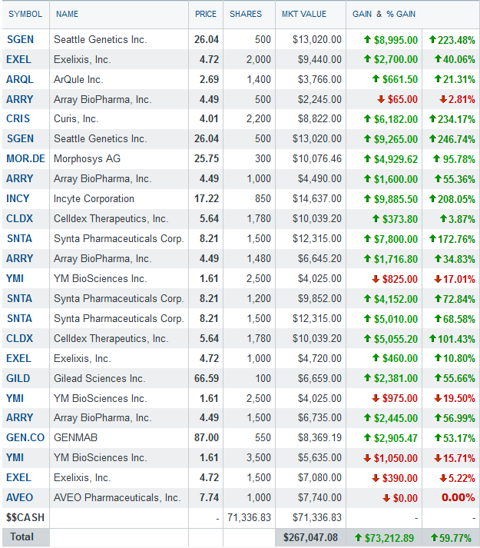 Disclosure: I am long AVEO. I wrote this article myself, and it expresses my own opinions. I am not receiving compensation for it. I have no business relationship with any company whose stock is mentioned in this article.

Ohad Hammer
915 Followers
Mr. Hammer is a biotechnology analyst, focusing on small and mid-cap biotech stocks. He holds a MS in Biotechnology and specializes in targeted therapies for cancer and autoimmune diseases. Visit his blog at http://www.hammerstockblog.com.