Gold and silver declined last week. Will precious metals continue their downward trend this week? As I have indicated in the precious metals weekly outlook, the main events of the week will revolve around the next FOMC meeting that concludes on Wednesday, and the U.S. third-quarter GDP growth rate estimate that will be published on Friday. These events could have a strong effect on the forex and commodities markets. On today's agenda: FOMC member Pianalto will speak.

As seen below, the chart shows the developments of normalized prices of precious metals during October (normalized to $100 as of Sept. 28). During the past week, both gold and silver continued their downward trends. 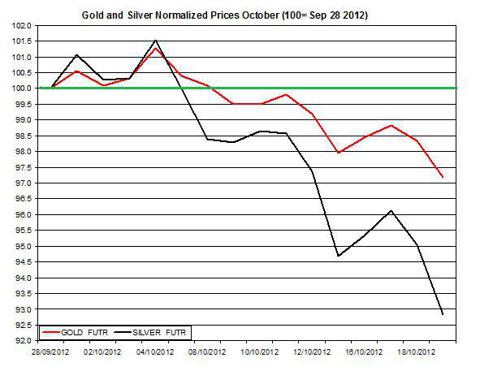 This will be the penultimate FOMC meeting in 2012 (the next meeting will be held Dec. 11-12). Following last month's FOMC decision to launch QE3 and extend its pledge of low short-term rates at least until mid-2015, the upcoming meeting isn't likely to result in big changes in the Fed's policy. Despite the launch of QE3, the prices of gold and silver are currently below their levels prior to Sept. 13.

In the upcoming meeting, there might be some additional talks about the future steps needed to help raise employment and the "fiscal cliff" that continues to loom over the future stability of the U.S economy. Nonetheless, if the Fed hints about future plans to intervene again the financial markets, this could help rally the prices of gold and silver. My guess, however, is that the Fed won't make any hints nor will it introduce new stimulus plans.

FOMC member Pianalto is set to talk about U.S payment system. If Pianalto also refers to the future steps of the FOMC meeting, it may influence gold and silver traders.

The prices of precious metals declined during last week, and may continue this downward trend this week -- especially if the Fed keeps its policy unchanged and the concerns around Spain's debt problems persist. This week's publications of the U.S. GDP and core durable goods could affect the commodities market assuming these reports show sharp changes from previous reports' figures. Finally, if the euro and other "risk currencies" trade down against the USD, then they are likely to pull down precious metals.