Amazon (NASDAQ:AMZN), the internet retail giant, reports their 3rd quarter, 2012 financial results after the bell Thursday night, October 25th. Analyst consensus is expecting a loss of $0.08 per share on $13.93 billion of revenues for a year-over-year (y/y) drop in earnings per share (from $0.14 a year earlier), but 28% y/y growth in revenues.

Amazon has made it a point to crush earnings the last two years by deliberately increasing "fulfillment" and SG&A (sales, general and administrative expenses) as they have escalated the build-out of regional distribution centers.

The answer I believe is that sophisticated investors look through temporary constraints on earnings and focus on AMZN's revenue growth.

Revenue growth is the key for AMZN, as the internet retailer is considered the best secular growth story in retail. With the September '12 retail sales reported in mid-October, it was noted that "non-store" retail, which includes internet sales, is now 9.4% of total retail sales.

What fascinates me is that with annual revenues of $63 billion, Amazon is still just 12 - 13% of WalMart's annual sales of $500 billion, and Walmart (WMT) is thought to represent about 10% of total annual retail sale in the US. For those who can quickly do the math, that means Amazon is just 1% - 2% of total retail sales in the US, and thus has plenty of growth ahead of it.

The other part of that story is that while WMT can only grow their top-line mid-single-digits given the $500 billion in annual revenues is a huge base from which to try and grow, particularly in this economy, AMZN should be able to sustain mid-teens growth for the foreseeable future as they continue to take share from traditional brick-and-mortar retail (note Best Buy's seeming demise).

This is the reason AMZN's valuation looks absolutely frightening on just about all metrics, expect for "price-to-sales", which, using 4-quarter trailing sales, has AMZN valued a little under 2(x) price to 4qtr trailing.

The attached weekly chart for AMZN indicates the stock is overbought, and while we would like to wait for the stock to re-test the $200 area, or even better the 200-week moving average at $150 - secular growth stocks sometimes never pullback enough to lower-risk buy points.

The holiday season is AMZN's highest volume season of the year. Current analyst consensus for Q4 '12 is $0.52 on $23.5 bl in revenues.

Amazon will continue to gain share for years versus traditional retail, but good companies don't always make for the best stocks.

Wait for your low-risk buy point. We have a small position in AMZN, and plan on waiting for a lower-risk moment to add to the stock. 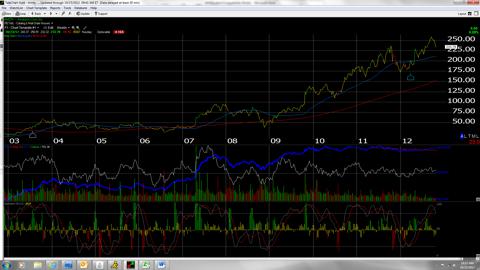 Disclosure: I am long AMZN, WMT. I wrote this article myself, and it expresses my own opinions. I am not receiving compensation for it (other than from Seeking Alpha). I have no business relationship with any company whose stock is mentioned in this article.

Brian Gilmartin, CFA
9.32K Followers
Brian Gilmartin, is a portfolio manager at Trinity Asset Management, a firm he founded in May, 1995, catering to individual investors and institutions that werent getting the attention and service deserved, from larger firms. Brian started in the business as a fixed-income / credit analyst, with a Chicago broker-dealer, and then worked at Stein Roe & Farnham in Chicago, from 1992 - 1995, before striking out on his own and managing equity and balanced accounts for clients. Brian has a BSBA (Finance) from Xavier University, Cincinnati, Ohio, (1982) and an MBA (Finance) from Loyola University, Chicago, January, 1985. The CFA was awarded in 1994. Brian has been fortunate enough to write for the TheStreet.com from 2000 to 2012, and then the WallStreet AllStars from August 2011, to Spring, 2012. Brian also wrote for Minyanville.com, and has been quoted in numerous publications including the Wall Street Journal.