Let’s go back a bit to the original deal between Salesforce.com (NYSE:CRM) and Buddy Media:

Salesforce has entered an agreement to acquire social media marketing platform Buddy Media for approximately $689 million, the company has announced.

The price is lower than the recently reported $800 million figure, but still a formidable investment from the enterprise software giant, which is on a seemingly never-ending acquisition spree. Salesforce had acquired collaboration tool company Stypi in May 2012, as well as social media monitoring platform Radian6 in March 2011.

Under the terms of the agreement, Salesforce will buy Buddy Media for approximately $467 million in cash, $184 million in Salesforce common stock, and $38 million in vested Salesforce.com options and restricted stock units.

Both sides talked up the wonderfulness of the deal and how it was a boon to CRM.

Now, here is a post I wrote back in August of this year regarding the folks at Buddy Media and their dumping virtually every share of CRM stock they received in the acquisition: Even though they got >$400 million in cash, they still elected to refrain from holding any shares of CRM as soon as their lockup ended.

Fast forward a few months and now we are getting some idea of what CRM shareholders actually got for their huge investment. In a word -- losses.

CRM released an amended 8-K today and in it are year-over-year comps for Buddy Media for the first six months of both 2011 and 2012. The results are a bit ugly. Losses are surging and the company is bleeding cash from operations: 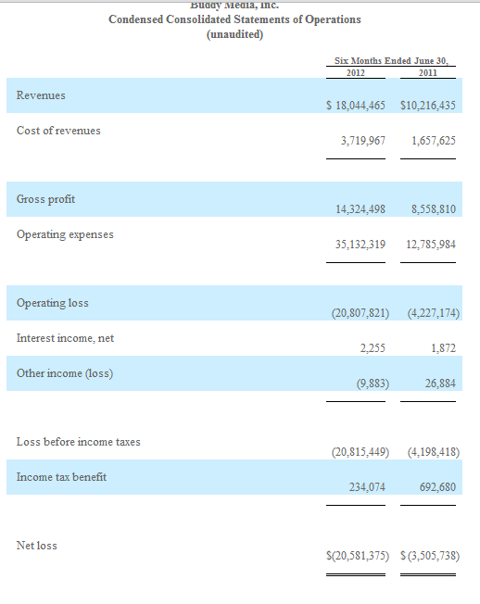 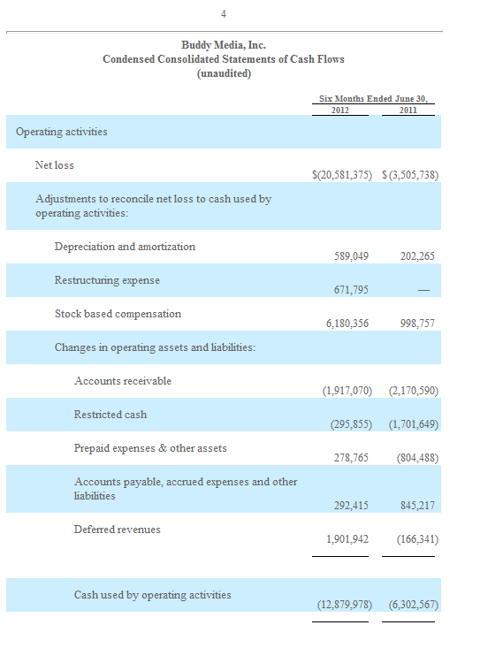 A note regarding cash flows: Focusing on operating cash and not the aggregate cash flow numbers, Buddy Media sold $83 million in preferred stock in 2010 and 2011, so that will make the numbers look far better than the reality. Just looking at the ending cash balances will give one the impression cash is growing. It is, but not because the company is producing cash from operations -- those results continue to get worse. They just sold preferred stock.

Now would be the time to point the $20 million loss in the first six months of 2012, which is larger than the $14 million loss for all of 2011. But -- and this is what CRM will focus on if Buddy Media results are mentioned during the earnings call -- revenues increased. This is the same story with CRM -- increasing revenues and increasing losses. I'll go back to the analogy I have used countless times before: I can sell $1 for $0.75 and increase my revenues all day long. I'll also increase my losses, which is what we are seeing at CRM. The theory for the bulls seems to be they will somehow sprinkle "profit pixie dust" on their financial results and magically begin to turn in profits.

I doubt this more every day as we are only now seeing both Oracle (ORCL) and IBM (IBM) make serious pushes into the cloud CRM space. So, if CRM has not been able to make any money when it essentially had the cloud CRM category to itself, how the heck does anyone really think they will be able to do it when two 10,000lb gorillas come running after them? It can't go any lower on prices; its financials pretty much tell us it is already there.

One could make the argument that both IBM and ORCL could make a serious push to undercut CRM on prices in order to steal shares, as they both have ancillary products to buffer any hit to results they may take in doing that. CRM has no options

Does this mean CRM is going under? Not by a mile. It does mean that the value of the stock is but a fraction of the current price. Price and value always eventually meet, and the value of CRM stock is well under the triple-digit share price it trades at now. They can only buy revenue increases for so long until reality hits and people start to expect these goofy little things like profits. When that day comes, it will be dramatic.

Disclaimer: The information in this blog post represents my own opinions and does not contain a recommendation for any particular security or investment. I or my affiliates may hold positions or other interests in securities mentioned in the blog, please see my disclaimer page for my full disclaimer.

Todd Sullivan
7.39K Followers
Todd Sullivan is a Massachusetts-based value investor and Co-Founder and General Partner in Rand Strategic Partners. He looks for investments he believes are selling for a discount to their intrinsic value given their current situation and future prospects. He holds them until that value is realized or the fundamentals change in a way that no longer supports his original thesis. His blog features his various ideas and general commentary and he updates readers on their progress in a timely fashion. His commentary has been seen in the online versions of the Wall St. Journal, New York Times, CNN Money, Business Week, Crain's NY and others. He has also appeared on Fox Business News and is a RealMoney.com contributor. He has twice presented at Bill Ackman's Harbor investment Conference and is a regular presenter at the Manual of Ideas "Best Ideas" conferences. Visit his sites: ValuePlays (http://valueplays.net/) , Rand Strategic Partners (http://randstrategicpartners.com)