I doubt if many investors would have noticed a white paper report that was recently put up on the Eaton Vance (EV) website in early October but since it is public information, I thought I would reprint it here and hopefully, spread the word a bit.

I cannot think of a more contentious subject for income investors than that surrounding Return of Capital (ROC) in the distributions of high yielding Closed-End funds (CEFs). Though not nearly as recognized as say the tax-free status of municipal bond interest payments, most investors would be surprised to learn that ROC can offer much of the same tax benefits. Certainly, there is nothing mystifying about municipal bonds and municipal bond funds to investors. They offer tax-free or mostly tax-free interest payments and are regarded as some of the most conservative investments available. This has made municipal bonds and municipal bond funds wildly popular and has pushed their prices in a near zero interest rate environment to all-time highs. In fact, all you have to do is take a look at the premiums that investors are paying for municipal bond Closed-End funds (CEFs) to see this. Though most muni bond CEFs use leverage of between 30% to 40% to leverage up their portfolios of muni bonds, this added risk has not deterred investors from bidding up virtually all muni bond CEFs to premium market prices over their Net Asset Values, some as high as 20% premiums.

Now I'm not going to sit here and pass judgment on the current valuation of the municipal bond market, however, owning municipal bonds vs. owning municipal bond funds are very different. Unlike individually insured AAA-rated municipal bonds which are guaranteed, municipal bond funds are not. Muni bond funds (mutual funds, ETFs or CEFs) are perpetual (i.e. don't mature) and can lose value and can change their distributions just like equity CEFs with high ROC in their distributions. Though the conditions for distribution changes is certainly much different due to the differences in volatility between municipal bonds and stocks, both fund classes will still be dependent on municipal bond and stock market conditions going forward to support their current payments. Over the past several years, the markets have been much more supportive of muni bond funds over most high ROC CEFs but unless investors forget, during the financial crisis of 2008, leveraged municipal bond CEFs saw their market prices and NAVs drop as much as the defensive option-income CEFs with high ROC. This can been seen in the following table comparing the 1-year total return market prices of two defensive high ROC option-income CEFs correlated with the S&P 500 with four of the largest national (non-state specific) municipal bond CEFs from the four most popular bond CEF sponsors. The period covers from December 31, 2007 through December 31, 2008. 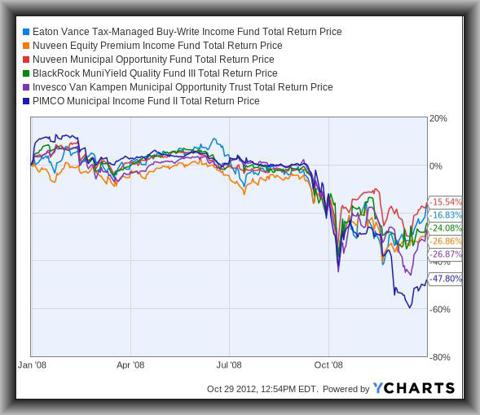 Here you can see that the worst performing fund on a total return basis in 2008 was the PIMCO Municipal Income fund II and in case you think I am cherry picking funds, I can tell you that the smaller PIMCO national muni bond funds fared no better in 2008. In contrast, the high ROC option-income funds compared very well to the muni bond funds and even held up much better than the S&P 500, which dropped -38.5% for 2008.

Now I'm not going to tell you that the risk in municipal bond funds is the same for high ROC equity CEFs. Certainly, muni bond funds have portfolios of less volatile securities than stock funds and can rely more on the stable interest payments that their muni bonds pay rather than equity CEFs that use income strategies that depend on the direction of a more volatile stock market. However, that risk narrows when bond funds, particularly the highly leveraged municipal bond CEFs trading at near all-time high premiums, are compared side by side with high ROC equity funds which are trading at wide discounts. The vast majority of the high ROC equity CEFs are non-leveraged funds that use an option-income strategy to generate income. An option-income strategy is the most defensive strategy in case of a more volatile equity market and yet these are the funds that trade at the widest market price discounts because of the high Return of Capital in their distributions.

Because the fact of the matter is if investors truly understood the risks and benefits of Return of Capital, they would be treating ROC with a lot more respect instead of disdain and they would be utilizing this neglected financial tool in their tax-planning instead of avoiding it. Though ROC distributions will never be looked upon in the same context as tax-free municipal bond payments, they don't have to be. If even only a slight perception change is shown in favor of Return of Capital, this could have large ramifications for funds that try and maximize ROC in their distributions. So with that said, here is Eaton Vance's white paper explaining Return of Capital to a wary investment crowd.

A simple example to illustrate:

Perhaps surprisingly, the tax character of a fund's distributions reveals very little about whether distributions are supported by the fund's total return. Returning to our example, Fund ABC may have invested in fixed-income securities yielding net income of 7% (supporting 7% dividends) and lost 2% in principal value due to bond defaults, trading losses or markdowns in position values. Alternatively, Fund ABC may have invested in growth equity securities generating 7% in net realized long-term capital gains (supporting 7% capital gains distributions) and lost 2% in principal value as net unrealized losses on its portfolio investments increase relative to net unrealized gains. In both cases, Fund ABC distributed more than its 5% total return for the year, causing its NAV to fall by the amount of the excess distribution (2%).
As demonstrated by the foregoing, fund distributions characterized as dividends or capital gains may not necessarily be supported by fund returns, and may represent economic return of principal. But can the opposite be true for return of capital distributions? Yes, that can be the case.

A second example to demonstrate:

Fund XYZ begins a year with an NAV of $10.00 per share. It realizes a total return on its investments of 9% ($0.90 per share) and distributes 7% ($0.70) during the year. Its NAV rises by 2% ($0.20) to an ending value of $10.20. If Fund XYZ has no net investment income (because deductible fund expenses equal or exceed income and net realized short-term gains) and no net realized long-term gain (because realized long-term gains are fully offset by net realized losses), then its distributions are all characterized as return of capital. Fund XYZ can achieve this outcome (desirable from a shareholder tax perspective) by, for example, owning growth equity securities that appreciate by an aggregate 9%, and matching net realized gains on appreciated securities sold with net losses realized by selling portfolio positions that have declined in value.

NOTE: To see the report in its entirety, go here, click on any one of the funds shown and link to "Return of Capital Distributions Demystified" on the right side under Related Content.

Finally, I have written several articles discussing Return of Capital and you can link to a few of these, the first of which also includes an older white paper from Eaton Vance that explains ROC in option-income CEFs. (here, here and here)

Disclosure: I am long ETB. I wrote this article myself, and it expresses my own opinions. I am not receiving compensation for it (other than from Seeking Alpha). I have no business relationship with any company whose stock is mentioned in this article.

Registered Investment Advisor since 2009. Prior experience includes 12-years as a Vice-President, Financial Advisor at Smith Barney from 1994 to 2001 and Morgan Stanley from 2001 to 2007.