Using a tried and true options method to capture upside gains in a leveraged fashion while limiting out of pocket expenses, I entered into a credit spread position with Apple (AAPL) with a January Expiration.

I've entered into credit spreads in the past with oil and long strangles with Apple before, but here's the most recent position I've entered and how it works. A credit spread is defined by wiki as:

In finance, a credit spread, or net credit spread, involves a purchase of one option and a sale of another option in the same class and expiration but different strike
prices.

I had promised myself recently that if I got the opportunity to buy Apple at 120's levels again, I would do it. After watching this stock yo-yo from 120 to 180+ multiple times, this week provided me the kick in the butt to make something happen. 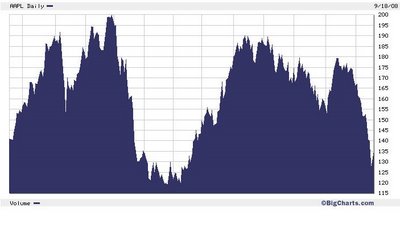 If Apple shares continue to flounder and never reach $155 per share, all the options expire worthless and I'm out $745.

If Apple shares rocket to say, $300, it's OK, as long as I have the same number of long and short calls. I will always be at the $2000 profit per position ($20 per share spread times 100 shares leverage per contract).

Here are the drivers for an upward move by January:

What could go wrong? If Google's new phone starts to outshine the iPhone, Google (GOOG) will rally and some air may be deflated from Apple's balloon. The solution? I own Google shares as well.

I entered into the position the afternoon of 9/18. By the end of trading, the stock had rallied $7 and the position's net gain is over $70 or 10%. Small potatoes for now, but in after hours, Apple's up an additional $3 and I expect follow through in tomorrow's market with an impending announcement by the Fed/Treasury on a new financial vehicle to shore up credit problems in the financial sector.

Disclosure: As of the time of publication, the author is long Google and has a long option position in Apple.

Everyday Finance
661 Followers
The author has a background in Chemical Engineering and an MBA specializing in Finance and Biotech Management. He is primarily focused on alternative investment strategies that aren't widely covered in the mainstream press such as hedging strategies, non-market correlated instruments, high-yield investments, international/developing markets, small biotechs and arbitrage. In addition to his contributions here at Seeking Alpha you can also visit him at his blog ETFBase (http://www.etfbase.com/), which provides free independent stock research, a real-time personal accounting of his personal trading portfolio, market commentary, and personal finance advice. Visit: ETFBase (http://www.etfbase.com/)