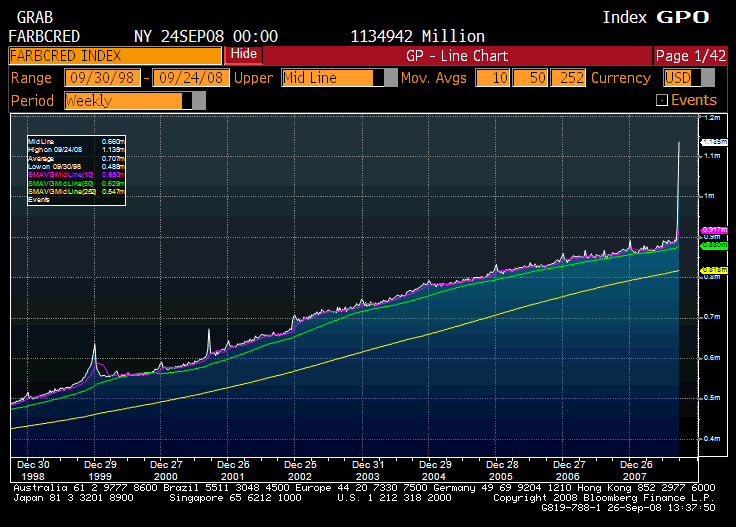 Look at the H.4.1 report. We may have finally hit the panic phase of monetary policy, where the Fed increases the monetary base dramatically. They are pumping the “high-powered” money into loans:

Making it an increase of roughly $270 billion from last week’s average to Wednesday’s daily balance. Astounding.

In general, the increases are not being pumped into the banks, but into specialized programs to add liquidity to the lending markets. Now, I’ve written about this before, but it bears repeating. What happens if the Fed takes losses on lending programs? It reduces the seniorage profits that they pay to the Treasury, which means the Treasury has to tax or borrow that much more. The Fed isn’t magic; it’s a quasi-extension of the US Government in a fiat currency environment. Its balance sheet is tied to the US Treasury.

Yves Smith at Naked Capitalism is correct. The US is no longer a AAA credit, particularly if you measure in terms of future purchasing power of US dollars. I’ve felt that for years, though, with all of the unfunded future promises that the US Government has made with Medicare, Social Security, etc. The credit of the US Government hinges on foreign creditors (like OPEC and China) to keep it going. What will they offer them? The national parks?

I try to be an optimistic guy and hope for the best. But the current actions of the government are making me think about a massive re-alignment of my portfolio… and I never do things like that. But, if the government is ramming through desperate measures, maybe I should too.

David Merkel, CFA
4.64K Followers
Please note that I do not read comments posted here, nor respond to messages here. I don't have the time. If you want my attention, you must seek it directly at my blog. David J. Merkel, CFA — From 2003-2007, I was a leading commentator at the excellent investment website RealMoney.com (http://www.RealMoney.com). Back in 2003, after several years of correspondence, James Cramer invited me to write for the site, and now I write for RealMoney on equity and bond portfolio management, macroeconomics, derivatives, quantitative strategies, insurance issues, corporate governance, etc. My specialty is looking at the interlinkages in the markets in order to understand individual markets better. I no longer contribute to RealMoney because my work duties have gotten larger, and I began this blog to develop a distinct voice with a wider distribution. In 2008, I became the Chief Economist and Director of Research of Finacorp Securities (http://www.prnewswire.com/cgi-bin/stories.pl?ACCT=109&STORY=/www/story/02-08-2008/0004752449&EDATE=). Finacorp went into liquidation in June 2010, after which I decided to open my own asset management shop, Aleph Investments, LLC. I manage stock and bond portfolios for clients. Until 2007, I was a senior investment analyst at Hovde Capital, responsible for analysis and valuation of investment opportunities for the FIP funds, particularly of companies in the insurance industry. I also managed the internal profit sharing and charitable endowment monies of the firm. Prior to joining Hovde in 2003, I managed corporate bonds for Dwight Asset Management. In 1998, I joined the Mount Washington Investment Group as the Mortgage Bond and Asset Liability manager after working with Provident Mutual, AIG and Pacific Standard Life. My background as a life actuary has given me a different perspective on investing. How do you earn money without taking undue risk? How do you convey ideas about investing while showing a proper level of uncertainty on the likelihood of success? How do the various markets fit together, telling us us a broader story than any single piece? These are the themes that I will deal with in this blog. I hold bachelor’s and master’s degrees from Johns Hopkins University. In my spare time, I take care of our eight children with my wonderful wife Ruth. Visit this site: The Aleph Blog (http://alephblog.com/)