It is widely believed that TARP and the Fed, through purchases of nearly $2.5 trillion of non-performing loans, mortgages, Treasury bonds and other assets (collectively termed Quantitative Easing [QE]) prevented economic collapse and lowered the cost of debt financing by lowering interest rates. Fed Chairman Bernanke explicitly stated that the objectives of QE are a wealth effect on consumption from higher asset prices and lower interest rates intended to spur investment and indirectly increase employment. At the same time, the Fed remains committed to managing to an approximate 2% inflation target while expanding the Fed's asset purchase program at a rate of $40-$85 billion per month until the unemployment rate reaches a satisfactory level.

This article shows that the actual effect on the economy slows real wage and employment growth, thus restraining GDP growth and negates a wealth effect through the following mechanism:

QE is a purely nominal attempt to solve a real economy problem. Its intended effects have not been proven before its launch: e.g. Is investment better spurred merely by low interest rates, or by adequate prospects for real return? And: Have QE, TARP and unemployment benefits policies maintained real wages instead of allowing them to fall with GDP, and thus prevented a return to full employment?

GDP: a Return on Assets

US GDP is reported as $15.6 trillion at the 2nd quarter of 2012 nominal run rate. If real GDP were growing at a normal 3% (the sum of 1% population growth and 2% per capita productivity growth), it would grow about $480 billion. (Coincidentally, this is the same figure as the volume of announced annual Fed QE3 mortgage purchases at $40 billion per month.)

But how does GDP arise? From labor and all of the other assets that enable and extend its productivity. If GDP itself is viewed as a return on assets, what can be surmised about the size of the asset base? One method would be to capitalize GPD by its long term nominal growth rate of about 5.2% (3% real and 2.2% or so inflation). This results in an estimate of about $300 trillion.

Very few attempts have been made to assess the assets of the U.S. economy. Dr. Rutledge provides a partial tally of U.S. assets as of 2008. The United Nations also attempted a tally. A more complete accounting is attempted below.

The Fed Funds Flows report provides a partial balance sheet of the US economy. I have calculated other major asset classes while trying to avoid double counting of debt and equity:

This totals about $310 trillion of assets deployed in the US economy (with some stock market value and debt related to foreign assets generating foreign GDP and vice-versa). Normal nominal GDP would run about 5.2% (3% real and 2.2% inflation) which, if applied to the total asset base, produces a calculated nominal GDP of $16.1 trillion - precisely the current run rate heading into the third and fourth quarters of 2013. Note that labor's share of the asset base is about 2/3 and capital about 1/3.

GDP growth is a function of increase in population engaged in productive activity and the rate of per capita productivity growth which is enabled by the non-labor assets of an economy - principally those listed above. Normal real GDP growth of 3% (nominal 5% to make the math easy) would result in asset growth wherein GDP growth represents an adequate expected return on new assets: a $16 trillion economy growing at a 5% nominal rate would produce an increase in nominal assets valued at about ($16 trillion x 5% growth)/5% nominal return on assets = $16 trillion.

An empirical validation can be derived from Fed Funds Flow data. From 2004-5 for example, GDP grew $.74 trillion. Total credit outstanding grew $3.4 trillion and stock market value increased $1.7 trillion for total financial capital growth of $5.1 trillion. Total expected asset creation would be $.74 trillion capitalized at a 5% long term GDP growth rate or $14.8 trillion. The growth in capital (about 1/3 of total assets) was in line with predictions. This rule holds nicely over time as well. Returns on capital and labor remain equivalent through arbitrage between them.

Effect of QE on Interest Rates and Inflation Expectations

The chart below compares the expected 5-year real return from TIPS, change in real GDP and expected inflation computed as the difference between 5 year nominal and TIP Treasuries. 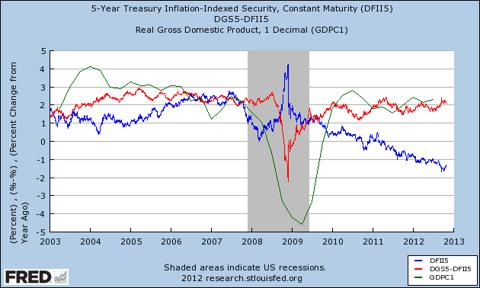 Clearly, deflation was expected by markets in late 2008 while real rates measured by 5 year TIPS remained above 1% during the latter ¾ of the official recession - indicating that the recession itself was not the cause of the subsequently negative real rates which did not occur until after GDP growth had converged to a real 2% trend. 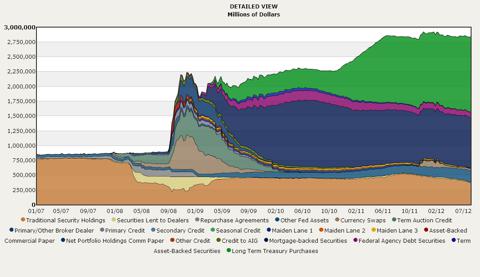 The TARP and Fed asset purchases accomplished at least three things: 1) the fall in real GDP was mitigated by preserving the capital that would and should have been devalued due to lack of return, and added new capital (the asset purchase capital); 2) expected deflation was reversed to inflation; and 3) the real expected rate of return/interest was driven negative.

In terms of marginal capital creation in the economy, the TARP and QE asset preservation and new capital (e.g. reserves) creation activity should be looked at in relation to normal, market-driven capital formation. Between TARP and QE, $2.5 trillion of assets where purchased with newly created money, mostly in the form of bank reserves. An argument can be made that almost all of the $2.5 trillion in purchased assets are so impaired in prospective return that no private market exists for them that would not require a discount so great that it would bankrupt its original owners - mostly banks. Charitably, I assume that the market value of these assets is ¼ of its face value or about $.6 trillion.

The $15.6 trillion economy growing at a real 2% (4% nominal) or $.62 trillion, would generate about $12.5 trillion in new assets - 1/3 or $4.1 trillion of that financial. Had non-performing assets been written off, the purely financial capital portion would have been reduced by at least $1.9 trillion instead of an excess $4.4 trillion. Normal return on capital would be 1/3 of the $.62 trillion nominal GDP growth/$4.1 trillion in capital or a 5% pre-tax return and 4% after-tax, leaving a 2% real return. The excess capital drives the pre-tax return to 2.4% and the after-tax real return negative. The shorter the maturity of capital, the deeper the negative real yield or expected return.

Comparing the first and fourth charts (below) the negative real yield as a function of maturity is easy to see with even long-term 10-20 year TIPS yields below zero; and fully agrees with the calculated real return on new and excess capital formation provided above. 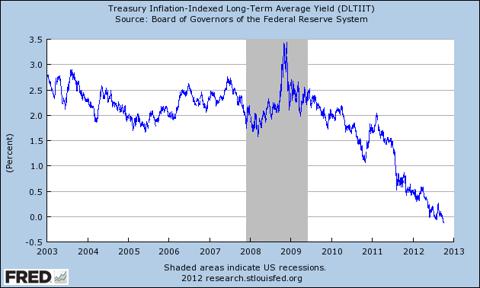 The Fed's new QE initiative adds to excess capital at $85 billion per month through the Fed's $40 billion monthly mortgage and mortgage-backed security purchases and operation "twist" long term Treasury purchases which at the high end is about 25% more than a 4% nominal growth economy would generate in financial assets.

If investment growth is a function of some required real return instead of merely low real cost of debt capital, then QE most certainly impairs capital formation; and by extension, related employment. Gross private fixed capital formation, chart below, remains at historically low levels in relation to GDP. 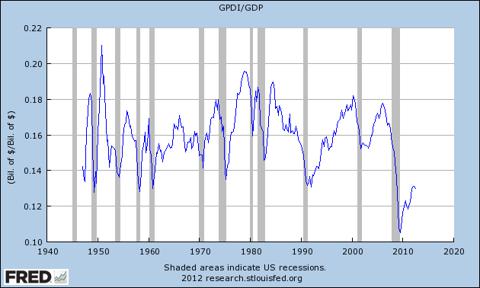 QE has not reduced the nominal cost of capital (long term interest rate) by driving up actual and expected inflation (below chart), but has definitely eliminated and driven negative the actual and expected real return. The fundamental question is: does a negative expected real return on marginal capital cause more investment and thus hiring than a positive return? So far, there is no evidence of this. 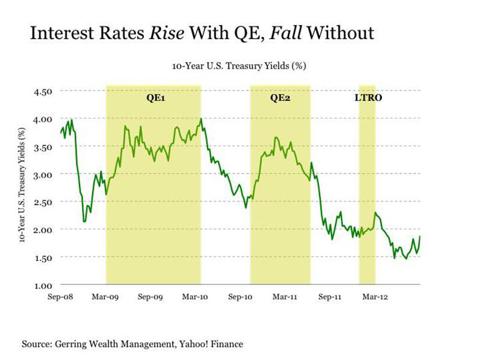 Another predicted depressant effect is on real wages and employment. Normally, real per capita GDP growth and disposable income track closely; and indeed must. Only since the 2008 recession has the former lagged significantly below disposable income. This of course is incompatible with return on capital which comes from the spread between real GDP and real wages - unless reduced employment is the source of the needed cost reduction. 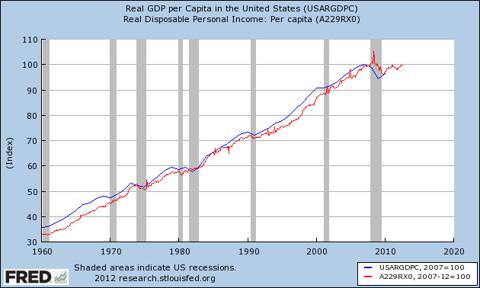 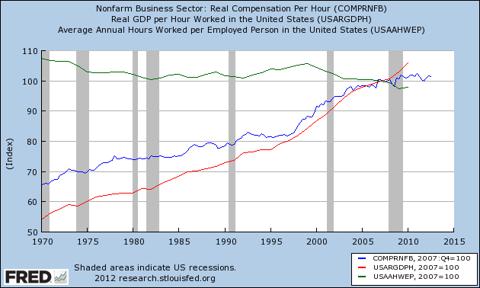 Even more concerning, the civilian labor force participation rate among those aged 16-64 is plummeting to 32 year lows; causing understatement of unemployment rates. It is notable that prior to 1980, much of the low participation rate was caused by women in this age range gradually entering the workforce. The plunge in the participation rate happened after the recession and the onset of QE while real GDP grew. 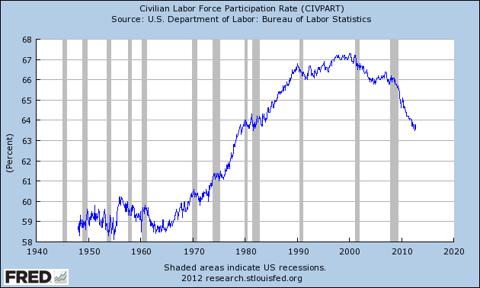 QE will continue to hold real yields low. TIPS yields will remain depressed in order of term structure - the shorter the term the lower (or more negative) the yield. Gold and oil are both held up by low real yields on fiat instruments such as stocks and bonds. GDP growth will be far below its 3% potential as both real wages and labor participation rates are depressed by the low return on capital created by the Fed. This means low stock returns capped by low top-line driven EPS growth and depressed valuations stemming from low real yields.

This is currently a global scenario with the US, EU, China and English economies all "supported" by historically aggressive monetary policies with China adding massive fiscal projects to the mix. The result is employment and real wage attrition and high running deficits, low growth and knife-edge recession risks uncushioned by healthy employment rates and government balance sheets.

A full discussion of an alternative solution is beyond scope for this article. The principal elements would include:

Julian Van Erlach
120 Followers
Julian has originated and co-developed a new, general, "Required Yield Theory" TM (RYT) of asset valuation encompassing stock markets, bond yields, gold and oil. RYT has been articulated in three academic papers published in major journals, and has been granted two patents (the only patents ever issued for an entirely new valuation mechanism). RYT valuation models are superior to all other extant public domain models including CAPM, MPT, APT. Content relating to RYT, consulting and intellectual property licensing services may be found at RequiredYieldTheory.com.