Today’s commentary concerns the last carry trade left in the markets, i.e. gold. Gold peaked at $1032 in March this year; however, since then it has fallen steadily, trading as low as $734. While this fall has been in line with a rising USD dollar, it has also been orchestrated.

Gold has been falling in an environment of rising inflation and rising uncertainty, and I've spoken in the past about gold de-coupling from the USD correlation one day.

At this point in time we need to distinguish between different types of gold, i.e. physical gold and paper gold.

Central banks hold a lot of physical gold and it just sits there earning nothing. As we know, central banks have been pumping money into the markets for 13 months now; what has not been reported is that they have also made their holdings of gold available for lease for about 0.25% for a month.

A short seller in gold can sell spot and lease the gold from the central banks at a nominal interest rate of 0.25%. If you sell gold, you receive USD; the cost of borrowing USD is therefore 0.25% (the gold lease rate) - so as long as gold doesn’t go up it is a cheap source of funding.

The central banks don’t mind this, especially when they want the USD up and as a rule they always want gold to fall. A falling gold price is a sign that everything is ok.

However, as you can imagine this is a time bomb because they are leasing physical gold to a paper gold market. At some point in time paper gold will not trade the same way as physical gold.

The demand for physical gold is the highest it has been for years, and this is the problem. Without the paper gold carry trade, you could argue that gold would be a few thousand dollars higher right now.

All is not well in the paper gold market. And this is a sign of an impending big rally in gold.

Lease rates have been skyrocketing over the past month. For the past six years, the 1 Month Gold Forward Lease Rate has chopped about at levels below 0.25 percent. Higher volatility over the past year has seen the rate move as high as 0.5 percent, but only in recent weeks have we seen rates greater than 2.5 percent (see chart below). 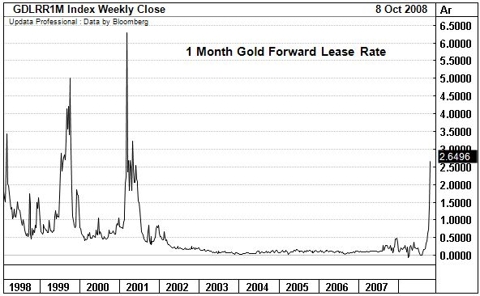 On a global scale, the gold market is unregulated and opaque. No one really knows the size of the worldwide short position in gold, but it exists and it is large (at least 10,000 tonnes). Unlike financial markets, there are few rules and regulations on selling gold short. For years, a dark pool of short sales is believed to have been suppressing the natural ascent of gold prices.

The current spike in gold lease rates indicates that demand for physical gold is extremely high and growing quickly. We may well be witnessing the first seeds of the gold price breaking free from the short sellers and the end (death) of the gold carry trade, which so many bullion banks made such large profits on in the 1990's.

The lease rates (available on TheBullionDesk.com) will be the key indicator to watch. If the short sellers in the gold market cannot afford to roll over their positions, they will be forced to close out their trades by buying gold. This could be one potential catalyst (there are many others) that sparks a major gold rally in the months ahead.

Fat Prophets
39 Followers
The Fat Prophets Story Founded in 2000, Fat Prophets (http://www.fatprophets.com/) has grown to become one of the world's leading independent stock market research houses. When we launched with our quirky, yet hopefully memorable name, we saw a finance industry that was out of touch with investors needs. A new breed of Do-It-Yourself investors was entering the market and they needed stock market research they could trust. So we set ourselves a mission that is as true today as the day we launched: our mission is to make your investments as FAT as possible. We achieve our mission by advising our Members exactly what shares to buy, at what price and when to sell to maximise their potential returns. There are three main pillars to the Fat Prophets success story… 1. We have a passion and an absolute dedication to making you money. 2. We are totally committed to searching for and picking the stocks with the very best chance of rising in value in the weeks, months and years ahead. 3. We will offer you an outstanding level of service. Independence Our research and stock market reports are completely independent. We are not paid by any of the companies that we recommend in our stock reports. Media Our analysts are often seen on Bloomberg, CNBC and Sky News television giving expert advice on the stock market, specifically on mining stocks, as well as regularly quoted in national newspapers. When the financial media want an independent opinion, they talk to us. Transparency & Accountability Fat Prophets is unique for our dedication to transparency and accountability. Every closed recommendation that Fat Prophets has ever made is available for you to review. Whether we have won or lost, we are proud of the research that we produce and the lessons we have learned with our Members along the way. Fat Prophets have an absolute passion and dedication to making your investments as FAT as possible. Our record (http://www.fatprophets.com/fat-performance/performance.aspx) speaks for itself. To join the weekly Fat Free newsletter click here (http://www.fatprophets.com/free-report.aspx?ref=Seeking%20Alpha). To take a look at two current buy recommendations by the analysts at Fat Prophets click here (http://www.fatprophets.com/free-report.aspx?ref=Seeking_Alpha) and to see a sample report click here (http://www.fatprophets.com/fat-performance/fat-sample.aspx). We wish you happy and profitable long-term investing.