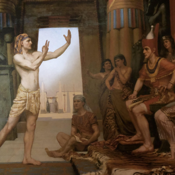 42 years old, married, and have two daughters 7 and 9, and a 1 year old son.  I live upstate New York near Ithaca.   My profile pic is that of Joseph, from the story from the old testament, where he is telling the Pharaoh that he will have 7 years of famine and 7 years of plenty and in order to prepare, he would need to save 20% of his surplus during the years of plenty so that he would have not only grain for his nation, but grain to sell to the other nations. It tells the principle that we need to learn to live within the cycles of nature. Investing and allocating money requires that same understanding. With that said, I focus on what I believe the rate of inflation will be and how it relates to investments.   I trust that understanding inflation will make for better informed investment decisions. I've been involved in stocks and investing since I was 13.  Have had successes and mistakes, that I've hopefully learned from.  I also have a background in manufacturing where I would give credit to my learning to understand the concept of productivity, another very important factor. I'm a fan of the following people to help give a perspective of my biases I may hold with regards to investment and economics:  Adam Smith, Milton Friedman, Charles Schwab (Steel Tycoon), Martin Armstrong, Peter Bernstein (Author), Henry Ford, Ayn Rand, Jay Gould, Ben Franklin, Aristotle, to name a few. .