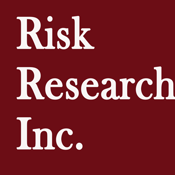 Risk Research Inc. publishes the Seeking Alpha Marketplace service Quality Compounders based largely on software originally developed for hedge funds. The Quality Compounders Report analyzes pricing probabilities in exceptionally profitable low-debt public companies. It capitalizes on market swings above and below each company's quarterly moving average, and has historically doubled the returns of "buy and hold." We also publish The Dirty Dogs list which identifies public companies with market caps of over $1 billion with particularly weak trends -- declining margins, increasing debt -- indicating inordinate risk or short sale potential. A third publication, The Dividend Dirty Dogs, identifies dividend-paying companies that do not cover their dividend from free cash flow and thus must increase debt or dilute shareholders to cover the payment. Roderick MacIver, Founder, President. Over the last thirty-five years, Rod has worked for a wide variety of activist investors including Industrial Equity LLC (Australia), Jordan Industries, Leucadia, Richard Rainwater and Sam Zell. He has provided research or completed consulting assignments for over one hundred mutual and hedge funds including Baupost, Fidelity Investments, Mutual Shares, Parnassus Endeavor and T. Rowe Price. In 1987 he was the subject of a Barron’s profile (Texas Will Rise Again, And Rod MacIver Tells How To Play The Recovery, June 22, 1987) which described his work for activist investors and mutual funds. He has discontinued his consulting work to avoid the airports and hotels involved in client visits. In addition to his business career, Rod was a successful nature artist for twenty-five years. He’s published several books of his art and writing, most of which are still available on Amazon. He divides his time between homes in Vermont and New York. Enrique Betancourt, Software Developer. While over twenty developers have worked on the Risk Research software, Enrique has made the most significant contribution toward it recently. His background is in probability analysis applied to a variety of fields including medical research, fraud detection assessment, insurance, financial statement cash flows, automated solutions and telecom automation. He holds a Master of Science degree in Computational Physics and a Bachelor's degree in Physics and Mathematics, both from the National Polytechnic Institute, Mexico City.  Often, our articles are written in collaboration with other Seeking Alpha authors including Kingdom Capital, DM Martins Research, David Zanoni and Artem Gramma.

Quality Compounders provides investors in the highest quality US public companies probabilities pricing – entry and exit levels in relation to moving averages that have historically generated returns of at least 20% per annum. "Highest quality" is defined as companies with exceptional return on assets, steadily improving free cash flow and little or no debt.