Financial analyst-writer for over 7+ years, featured in financial publications including The Street, Motley Fool and Seeking Alpha. Completed his Bachelor in Business Administration (Finance) with GPA 3.0, completed his LLB (law degree) from one of the premier universities in India. Specializes in analyzing company stocks for the 'long' position, especially in the banking, finance, real estate and technology sector.

US unemployment rate...yes, US budget deficit and debt crisis definitely poses a big problem for the economy, but even though I am not an expert economist, I believe the high US unemployment rate is one of the most crucial factors playing a role in the current low GDP growth rate, 1%-2%, of the largest economy in the world.

Even after the Great Recession, we thought that the non-improving unemployment rate was impeded by the Great Recession (2007-2009) or some temporary occurrences such as the Tohoku Earthquake and Fukushima Daiichi nuclear reactor accident. But hold on a second! Is it so?

Quick recap on the US unemployment rate history

Before the mortgage sub prime crisis, followed by the Great Recession in 2007, the US unemployment was running at extremely low rates since the last ten years. In November 2004, it was recorded at 5%, often considered to be an optimum rate for full employment. And this was due to the solid comeback by the US economy after the serious early 2000s recession, after the dot com bubble.

The country was gaining traction in the post dot com bubble era, and that showed in the improved unemployment rates, especially in the construction sector. Though the black cloud was already accumulating over the head of the Americans who faced severe debt issues, after the crisis. This impeded consumer expenditure and the gross domestic product (GDP) growth rate of the US economy, although the economy was cushioned by the increasing foreign direct investment (FDI). It must be noted that the US unemployment rate was still clocking below 5.5% in 2005 and 2006. 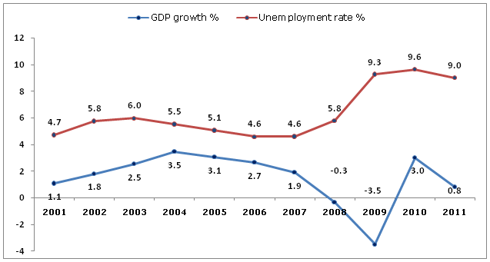 But soon we were reaching the era of the Great Recession and that was spurred by the US housing estate bubble in 2006. During the first quarter of 2007, the economy grew by only 1.2%, and 2.1% in 2007. Needless to say, the unemployment rate started to ratchet up steadily, crossing the 7% mark by December 2008. The US unemployment rate continued to rise up to 9.9% in April 2010, when the Great Recession was officially supposed to be over. The construction, manufacturing and wholesale trade sectors were primarily affected during this time.

What is the main problem?

The main problem here is that producers or employers, are looking for better profitability in an unstable environment. 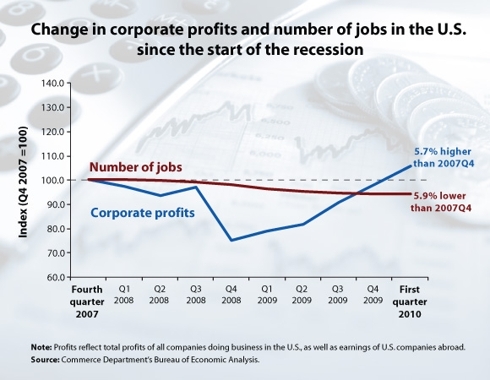 The US real GDP increased at a mere 1% annual rate, as recorded in the Q2 of 2011, against 0.4% increase in the first quarter this year. Although things are changing in the non-residential fixed investment, exports, domestic consumption expenditure and government spending, this is still not enough and most economists are already sketching out the chances of a double dip recession. 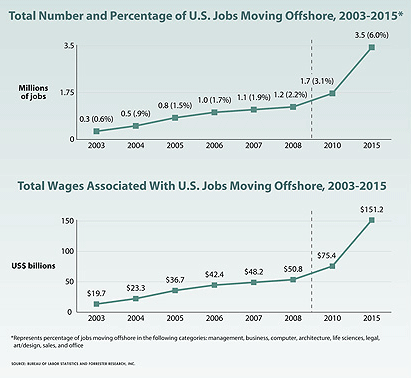 And this has resulted in the...

The main problem is with the various H-1B, H-2B, L-1, OPT, J-1 and B-1 work visas, which allow the foreign workers to enter US with around six years time limit. This not only gives them the time to learn the job, but also end up bagging the job and the US citizenship in the end. This gives them the license to bring their friends and relatives in the future, being in direct competition with the American employees.

But the worst thing is that the time period of these foreign workers cannot be tracked easily. “The total number of H-1B workers in the United States at any one time—and information about the length of their stay is unknown, because (1) data systems among the various agencies that process such individuals are not linked so individuals cannot be readily tracked, and (2) H-1B workers are not assigned a unique identifier that would allow for tracking them over time,” said the 2011 GAO report.

The present H-1B visa has the maximum limit of 65,000 jobs annually, which comes down to something less than one percent of the present unemployment numbers of 13.9 million Americans, but it must be remembered that it stacks up year after year.

“Loopholes in these programs have made it too easy to bring in cheaper foreign workers with ordinary skills, who directly substitute for, rather than complement, workers already in America. They are clearly displacing American workers and denying them both current and future opportunities,” testified Ronil Hira, professor at Rochester Institute of Technology, before a U.S. Senate subcommittee hearing in July.

According to Hira, almost 21% of these visa applications help perpetuate fraud in the country. And most of these companies that avail the visas gain an upper hand in off-shoring thousands of American jobs.

Last year, Infosys, Wipro and Tata Consultancy Services added over 57,000 new employees. That takes away that many jobs from the Americans, really sad news!

According to a mid-2011 report by Economy Policy Institute (EPI), “The J-1 Exchange Visitor Program is now the largest U.S. guest worker program in terms of annual admissions. Of the 350,000 exchange visitors and their spouses and dependents that entered the country in 2010, nearly 300,000 were employed in full- or part-time jobs during their stay.”

“U.S. workers that are displaced by J-1 workers have no protections or enforcement tools under the State Department regulations,” according to the EPI report. And since the jobs aren't advertised, their can be no legal action against it.

And in this case, not only the American students are affected but also the foreign students are exploited through the process, and that showed in the poor working condition of the Exel Inc's hired students in the Hershey warehouse case.

“It is not clear that this guest worker diplomacy benefits anyone other than certain U.S. employers and sponsor organizations. If the Exchange Visitor Program is to continue, the State Department should provide evidence demonstrating how the country benefits culturally and educationally from having 300,000 workers enter the country each year to take jobs that young Americans desperately need,” said the EPI report.

To sum it up, if the high US unemployment rate is to be alleviated even a bit, the outsourcing of American jobs need to be curbed, at least to some extent. Remember, with the rise of global era, it can be a hard step, but to control the high unemployment rate, outsourcing is what needs to be looked into first.

Perhaps, actions are already being taken on this front, since Barack Obama recently declared tax benefits to only those companies that creates jobs in the US economy. "We believe on tax breaks for those firms that create jobs in the US. So we are beginning to do that," Obama said at a press conference. Needless to say, the Ohio state governor has already banned outsourcing.

Over 8 million jobs have been lost during recession, and outsourcing is taking away bigger chunks from the American job sector. So, that's where Obama wants to target. In the Cleveland conference, he said, "One of the keys to job creation is to encourage companies to invest more in the United States. But for years, our tax code has actually given billions of dollars in tax breaks that encourage companies to create jobs and profits in other countries."

Just after that, we came to hear today that AT&T promises to create 5,000 jobs in US if the acquisition offer of $39 billion on T-Mobile USA is allowed to proceed. Are we seeing the start of a trend here? Perhaps, companies are merging together to form even bigger and more powerful organizations, and helping the United States to bring it back to its former state.

Moreover, it must be noted that since American labor is going cheap with the huge surplus between supply and demand, a few jobs will definitely come back in the United States over time. Remember, businesses want profit maximization, irrespective of age, area or sex. Economics is a fine balance of nature, ain't it?