An anonymous blogger from the 'financial industry' writing about the economy, markets, politics, corrupt organizations, or whatever else seems worth discussing.

In most professions if you are consistently wrong you lose your job. If for some reason you do not lose your job, you will at least lose your credibility. Oddly, that is rarely the case with Wall Street Investment Strategists. In fact, regardless of how their calls turn out, many show up day after day on the media circuit merry-go-round (and investment conference merry-go-round).

What brings this up is a recent meeting I attended where Dr. Bob Froehlich was the main speaker. You have probably seen him on CNBC, Fox News and the like. Somehow I seem to cross paths with "Dr. Bob" a couple times a year. He currently is the "Chief Investment Strategist" for The Hartford. He used to have essentially the same job for DWS Investments. In fact, I remember a rep from the firm bringing him by our office in mid-2008. And yes, he was in full permabull mode. According to him, The Fed was gonna keep lowering rates and you don't want to fight the fed! It was worth a good chuckle (after all, he still thought housing was only a "subprime" problem).

If you ever wanted a shining example of a "permabull" this is him. In his own words from his Jan 3rd commentary he says "As a strategist who always sees the glass half full......" However, honestly, I'm not sure he ever sees the glass as anything but completely full. Now there is nothing wrong with being optimistic....But blind optimism does justice to no investor.

Just to illustrate how consistently bullish this guy is...........BussinessWeek April 2000 - Branding a Bull, Kemper-Style (yes folks, this is about a week after the market peak, when the S&P was around 1500).

"Undoubtedly another reason Scudder Kemper is "branding" itself by featuring Froehlich is that he's an unabashed bull. He has produced a series of audio tapes called From Wall Street to Main Street that extols the great benefits of investing in stocks. He has penned a recent book, The Three Bears are Dead!, which makes the case that the "three bears" of investing--inflation, interest rates, and government spending--all died in 1997. And Froehlich is a big believer in "Boomernomics"--that is, that baby boomers are just starting to drive the economy and stock market and that their impact will be much greater than anyone thought, prolonging the bull market well into the 2010s. The Chicago Tribune wrote about Froehlich, "There are [those] who have the eyes to see the dust in the distance, ears to hear the hoofbeats of the thundering herd, and noses to smell the money to be made. One of those is Robert Froehlich."

Dr. Bob couldn't smell money to be made if someone shoved it up his nose. That is, unless we are talking about how he really makes his money (because we know it's not by investing). He knows he makes his money as an "investment strategist" by selling blind optimism. 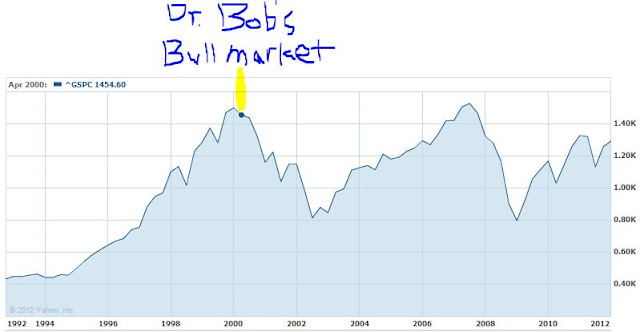 Despite his continued bad calls, mutual fund companies continue to employ this guy. Why? Because apparently they believe optimism sells! When DWS Investments finally got rid of the guy in late 2008 (after another market crash he was completely blindsided by), Hartford was quick to swoop up the hype machine.

Dr. Bob puts out his 10 investment themes yearly and they tend to always be good for a laugh. For example, the below was Dr Bob's Top 10 Investment Themes for 2011.


10: Investment Theme: “I WANT TO TAKE YOU HIGHER” (INTEREST RATES RISE)
Strategy: OVERWEIGHT PRODUCTS THAT HAVE A POSITIVE CORRELATION TO A RISING-RATE ENVIRONMENT 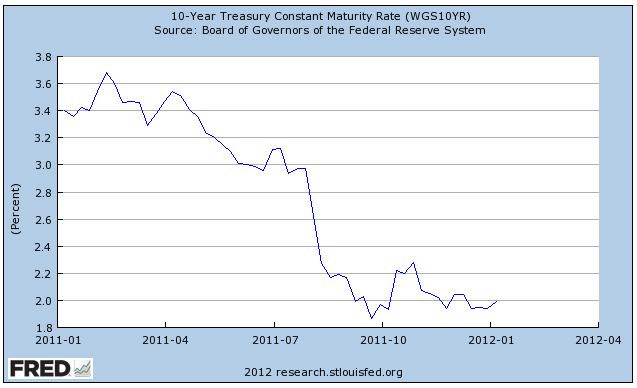 Well let's first look at how his sector bets turned out (I included commodities using the S&P GSCI). Dr. Bob's sector "overweights" are in red. 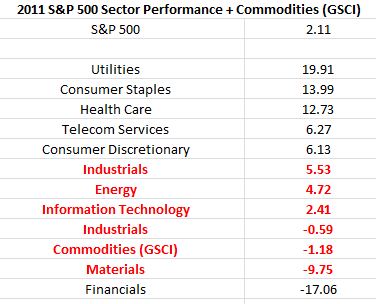 Gee, if he only would have picked financials he would have been perfect.........at picking all the WORST performing sectors. The story isn't really any different if we look at global sector performance either (except the negative numbers are much larger). 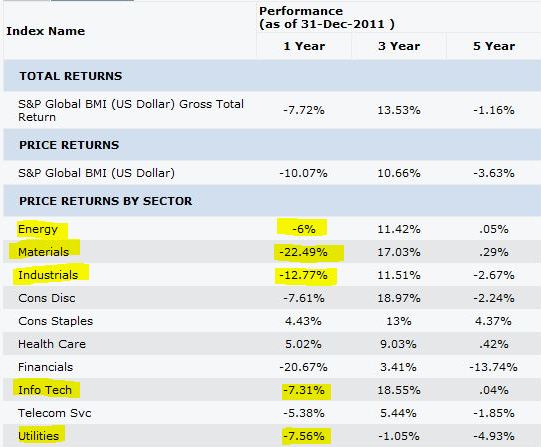 How about his country overweights? China and Germany were both down about 18%. That compares to the MSCI World index which was down just over 7%. Clearly not a good call. And it goes without saying that his call to overweight international stocks (with an emphasis on emerging markets) and underweighting the dollar were both bad calls.
Now anyone can get calls wrong, and everybody does. But the consistency with which he makes bad calls and the degree to which he misses every crisis is amazing.
So what are his themes for 2012?

It will be hard for him to do worse than 2011. Here are a few gems from the above letter. First in regards to China

He was also very adamant about the China story when I saw him speak. The funny thing is this part where he claims to be able to spot bubbles...


"Look, the one thing that I’ve learned in my 35-year career is what the chart looks like for an asset bubble. It looks just like gold where the chart simply goes higher, and higher, heading straight up with no end in sight"

But the best is this one, and he repeated this many times also when he spoke.


"First of all, Europe won’t fall into a recession"

The above is a perfect reflection of how long Dr. Bob stays in denial. The reality is the Eurozone is already in a recession!

Again, the purpose of this post was not to point out individual bad calls (although I did that). The purpose was to point out how ridiculous it is that the financial industry pays so much attention to (and regurgitates) opinions without any regard to the credibility or supporting facts behind those opinions.

Let me leave you with Dr. Bob's most ironic comment from his most recent letter. This is from his theme #9: Invest in Tax-Free Municipal Bonds (where he tries to call out Meredith Whitney for her call on Muni's)


"It never ceases to amaze me how the doom and gloomers tend to get all of the media headlines and hype. I guess it’s true that “bad news” sells"

News for you Dr. Bob. If bad news sells, why do you still have a job? Furthermore if accuracy matters, why do you have a job? And while he doesn't say it in his letter, when I heard him speak, he actually spoke about how upset he was that Meredith Whitney "was not held accountable" for her call! Really Bob? Really?