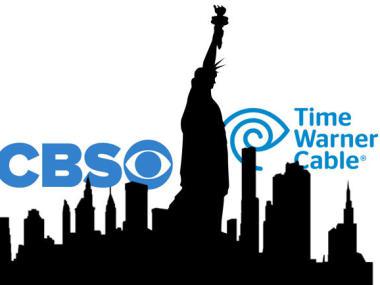 Their message is quite simple that CBS wants more fees and TWC can't accept CBS offer.

What would be key reason of conflict?

Naturally, it's quite hard to imagine street fight between a professional UFC player and a normal person, since they all know possible result of the event of fight. So, they will compromise rather than physical attack.

And, it is also natural that the meaning of price is quite varying between seller and buyer, because they all dissatisfied with the price, in different ways.

But, market has been changed.

TWC is a cable TV distributor who has exclusive access point to individuals and negotiate contents holder such as CBS for broadcasting. However, the exclusivity about channel distribution has been weakened with new media platform such as smart TV, IPTV, internet streaming, Aereo, app, etc. They almost dismantled cable TV platform and contents holder has lot more chance to access end client, individual.

As a channel distributor TWC loses its own negotiation power, and CBS already know about it.

The CBS is telling TWC that you have no more exclusive distribution power, and TWC don't want to listen it. Time after time, TWC will lose its power; however, as a contents creator CBS is not replaceable.

This is a just beginning of industrial reform to contents holder.

The result of conflict is not important. The important fact is fighting itself.