Apple reported its Q1 earnings Jan. 24th and, to put it blandly, surpassed Wall Street estimates. On November 21st, we posted an analysis after Apple missed its previous Q4 estimates. Apple was down nearly 2% and down 10% since previous Q3 earnings and investors started questioning Apple's growth outlook due to the "law of large numbers" (i.e., its sheer size impacting it's ability to grow combined with increasing able competitors taking marketshare. Indeed - Kindle Fire seems to be… doing well). But hold-on… AAPL, already on of the larger companies in the world, grew revenue at 73% year over year to $46.3 billion. Good thing it's slowing, otherwise every product I own would soon be AAPL.

Tweaker consensus modeling had AAPL at a growth rate range of 19-26% and a profit margin of 15-19%. That is significantly below actual results. Even with these significantly lower forecast assumptions, AAPL looked, that far back, undervalued at its then price of $369.01, getting overvalued at only above $500.00 on conservative assumptions. 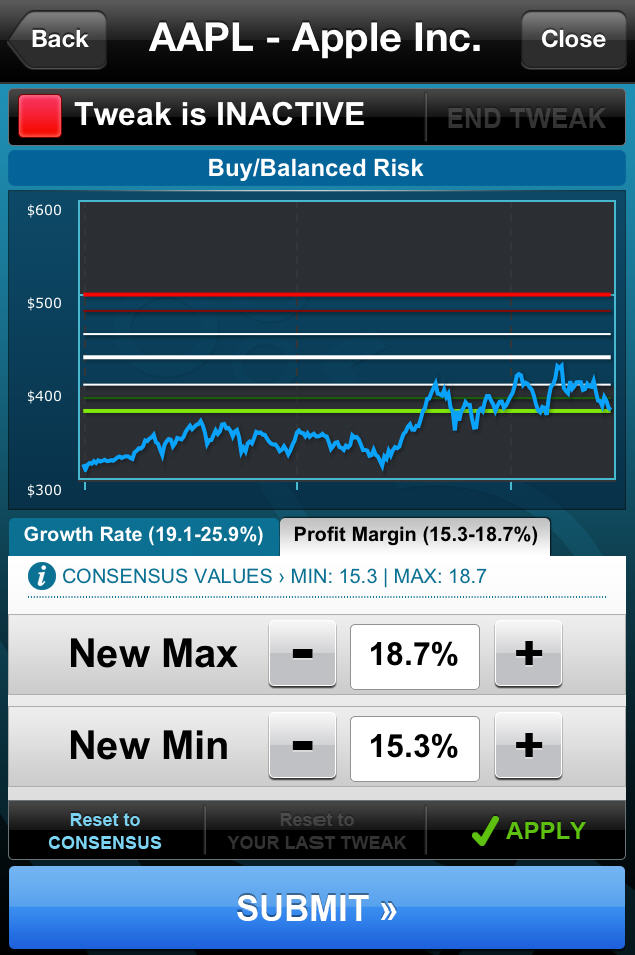 At its current price of $453.01, AAPL yet remains comfortably within Tweaker's fair value safety range. Tweaker has captured some 33% Apple's trading range over the last year but all the while indicating it's proper direction, which has been upward. The stock was significantly undervalued last year, showing 'too cheap' with low risk a year ago. (Tweaker shows where stocks are cheap/low risk and where risk outweighs return given explicit assumptions of growth and margins as can be seen in the chart here and in any chart Tweaker produces for you). 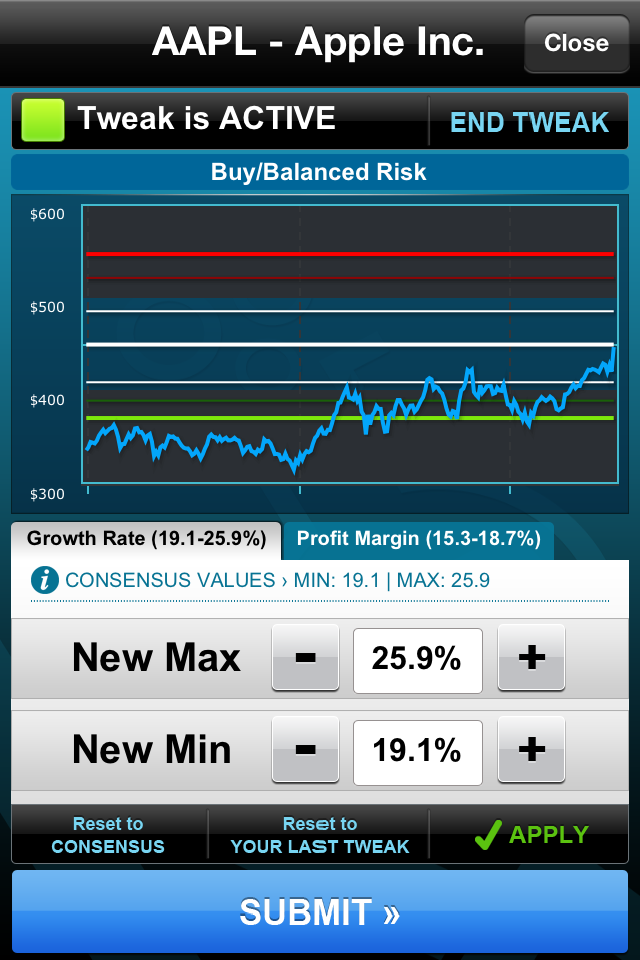 Competition seems to be from substitution to other products, selling 15.4m iPods, 37 million iPhones, and 15.4m iPads during the quarter, representing -21%, +128% and +111% unit growth, respectively, and showing a 58% overall unit growth year over year. Wow (see table below). That helped swell its warchest of cash and securities to almost $97.6 billion, or $105/share alone (factored conveniently for you in the Tweaker approach to valuation). 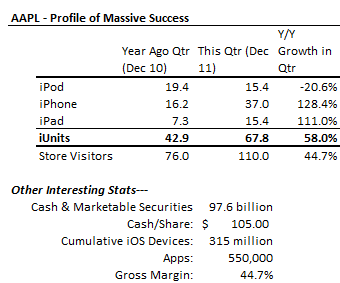 My 8 year old daughter proudly proclaimed their 2nd grade class now as an iPad for every student just last week. Higher grade levels saw the introduction and blow-out release of U App, which is "allowing students using iPads to have access to the world's largest catalog of free educational content, along with over 20,000 education apps and hundreds of thousands of books". Success? Yes - so far - 3 million downloads. Hard to tell what the 'margins' are there other than continuing to enhancing the Halo Effect further.

iPhone saw similar adoption/approval in the Fortune 500 and beyond.

They have even seen a big jump in what was a slowing business of Macs, selling 1.1m vs. 851 thousand last year. Halo effect? Seems so.

"It sets up Apple well for the rest of the year," said Canaccord Genuity's Michael Walkley. They are still ramping up the new geographies like the iPhone 4 in China. "Going into 2012, I expect strength of iPhone, iPod Touch and iPad should carry on into the year. Apple still has some tailwind, including opening up new retail stores and expanding its distribution channels," said Hendi Susanto at Gabelli & Co. "I would say Apple still has many unpenetrated international markets … Apple is still far from its saturation."

At the current rate (i.e., no growth), AAPL would be able buy all shares outstanding in just under 5 years. Abstraction to P/E, P/S and PEG don't quite capture the picture - AAPL still remains priced fairly despite it's recent move and due to its continued amazing results - will it continue? That's always the billion dollar question - but their results don't have to do anything but moderate to keep the party going with the stock.