Capitalist Exploits is a team of globe-trotting professionals dedicated to seeking out and investing into unique, undiscovered, and profitable opportunities worldwide. This could be an asymmetric trading opportunity in the global currency markets, seeding a tech startup in Israel, or co-investing into a bespoke private equity deal in Ghana! Our team lives and spends time in several different countries, on several different continents. Although we all come from different cultural backgrounds and parts of this great ball of dirt hurtling through space, in today’s world this matters little, as our values and mission are all aligned.

One technique to ensuring kids don't misbehave is to threaten them with a trampling from fully-grown elephants. It works better than chaining them up or locking them under the stairs. I highly recommend it.

Last year while living in Northern Thailand my wife and I took our kids elephant riding in the jungle, which was where I tested the above theory and found the results satisfying…at least for a short time.

Instead of being intimidated, or worse yet trampled by these enormous, powerful creatures, we found them to be extremely gentle and so utterly compliant to their masters that it was a bit unnerving.

How do you get a fully-grown elephant bull weighing in at about 7,000kg to be a completely passive slave to its skinny, 25 year old Thai master?

Well, from the time they are babies the "trainers" shackle the elephants with a chain around their ankle to a stake in the ground. They make ABSOLUTELY certain that no matter how hard the baby elephant struggles to free itself it cannot do so. That stake is in there good!

Eventually the young elephant gives up trying to free itself. It realises the futility in its efforts and just stops struggling.

This results in a fully-grown, enormous creature who in the prime of its life, and at its most powerful, just stands there with a loose piece of rope dangling around its ankle, attached to nothing but a wooden stake, now just barely pushed into the ground, totally and utterly compliant.

Gratefully, "most" never attempt to free themselves and take vengeance on their captors. Of course if they chose to do so they would snap the rope in seconds and tear anyone in range limb from limb.

In the mind of the elephant it truly believes it cannot escape. The mind has been conquered, and the physical body complies accordingly.

This is an example of the power of psychological manipulation.

Another one of my favourite examples of said manipulation comes from a research project I read about years ago.

The white coat types put a bunch of fleas into a glass box. Fleas being what they are, they immediately jump straight out of the box. The researchers then place a glass lid on the box. The jumping fleas start banging their little flea heads on the lid, and within minutes they are no longer crashing into it, but instead are jumping to within millimetres of the lid. Apparently even a flea comprehends what's happening there.

The interesting part is after having subjected the fleas to a period of time in the box with the lid on, the researchers then take the lid off the box. The jumping fleas remain inside the box, jumping only to the height of where the lid USED to be. They never again jump out of the box.

Just like the elephants, they have now been trained. Numerous examples of the above phenomena exist, from monkeys to my fluffy little puppy, curled up at my feet as I write this. 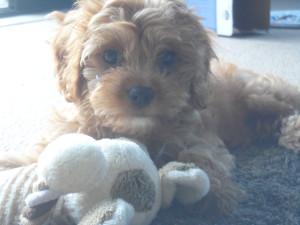 Sure is cute, but he too will be coerced and manipulated to do what I want him to do!

We are consistently subjected to psychological manipulation by our fellow humans. We may not see physical shackles around our ankles or lids placed over us. The manipulation is more subtle, but no less powerful. There are masters and their are subservient fleas amongst every populace. The world has always worked this way and always will.

Those who believe that they are trapped in a job, political system, country, social group…whatever, are often trapped not by any reality, but by what they perceive to be reality. A glass lid. Modern day slavery no longer requires "real" chains.

Stop Being a Slave! Keep your Private Information Private.

Part 1 is finished and will be delivered September 17th, with part 2 to follow on September 19th!

In truth there is safety and comfort in accepting slavery, which is why it's been so successful throughout history.

I am reminded of a great scene from The Shawshank Redemption, where "Red", played by Morgan Freeman, a veteran of the prison they find themselves incarcerated in, says to Tim Robbins character "Dunfane":

"These walls are funny. First you hate 'em, then you get used to 'em. Enough time passes, it gets so you depend on 'em."

With the bread (money printing) and circuses (let's bomb Iraq, or Libya, or Afghanistan or Syria…or) gaining momentum, many still have no idea they're enslaved, and fewer still will do anything about it. Everyone's got a cellphone that can make pancakes now, so nobody is worrying about anything!

The world is incredibly dynamic, yet we're trained to think in a linear fashion. This makes no sense. The ability to break out of the box has always existed, it's the box that changes, and the means of breaking out also changes accordingly. I spoke about these issues a long time ago in a post entitled Predicting Prosperity.

People that look beyond the glass lid and are willing to retest the shackles are routinely those we see changing the world.

An example of breaking out of "serf" think

Breaking out can be achieved by simply questioning existing beliefs, stress testing what is considered normal, acceptable or achievable…and seeing if the lid exists, or if it exists only in the mind.

Question: What would you do if you had to raise millions of dollars virtually overnight?

Mark and I were recently talking with some new friends of ours…friends who have made a decent amount of money. The story of their wealth, in highly consolidated form, answers the question above, at least in so far as how our friends dealt with the problem.

Some years back these friends found a rather attractive real estate deal. In order to consummate the deal they needed substantially more money than they had at the time. As such, they entered a 50/50 JV with a "friend". They would do all the work, use whatever of their own capital they could, and their JV partner would contribute the remaining capital as a passive investor.

In this part of the world once the purchaser completes their due diligence they go "unconditional" with the offer. Then a deposit is typically paid and there is no backing out for either the vendor or purchaser. Should the purchaser fail to close, they will lose their deposit and can be sued for the balance of the settlement funds.

The JV partner/friend waited until the deal had gone unconditional, and in a move fresh out of a soap opera drama turned to our friends, his partners, and said, "I'm not settling unless you give me 75% instead of the 50% we agreed on." Since they absolutely had to settle or risk losing every penny they had committed to the deal, as well as risk being sued for the balance of funds, their "friend" knew he had them by the balls. Or so he thought.

Being the kind of guys they are they promptly told their "friend" to get F*&^ed and proceeded to frantically scramble to raise the many millions of dollars required to keep them in the deal, and equally importantly to save themselves from potential financial ruin.

Now, many people I know would have looked at this and said, "We're screwed, it's not possible to raise that much money in the time frame we have." They act like Shackled elephants.

Or, "I don't know anyone who has that kind of money, and the banks won't lend it to me." They are like the trained fleas.

Then there are those who would have said, "We will have to take the deal and let our JV partner (tosser, idiot, moron) take whatever he wants." These folks are acting like trained puppies.

In case you're curious how it ended, our friends raised the money and turned a modest deal into a fortune in under a decade. They didn't see the glass lid?

It makes me wonder what I believe is true that just might not be! How about you?