Capitalist Exploits is a team of globe-trotting professionals dedicated to seeking out and investing into unique, undiscovered, and profitable opportunities worldwide. This could be an asymmetric trading opportunity in the global currency markets, seeding a tech startup in Israel, or co-investing into a bespoke private equity deal in Ghana! Our team lives and spends time in several different countries, on several different continents. Although we all come from different cultural backgrounds and parts of this great ball of dirt hurtling through space, in today’s world this matters little, as our values and mission are all aligned.

Regular readers will have been very well positioned to take advantage of what is happening in emerging markets and specifically currencies as we can see from the fairly dramatic chart below. 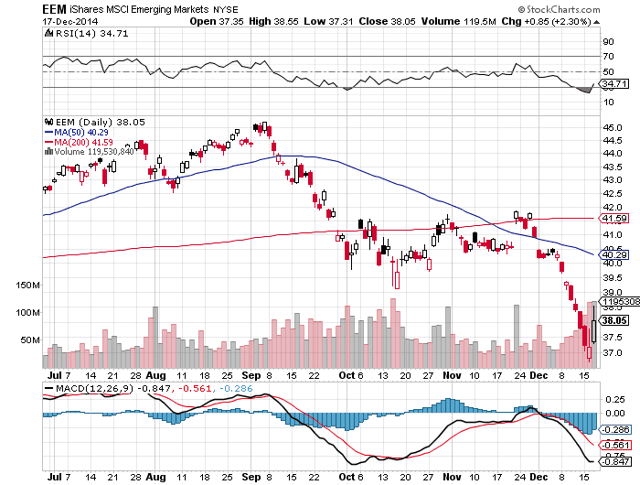 We've been positioning for a USD bull run for some time now. Back in October we made the call that the yuan looked like it was providing us an asymmetric payoff opportunities as volatility was extraordinarily low, meaning that the market was not anticipating either volatility and certainly not weakness in the yuan. Here is what Brad said.

As mentioned in my writing on the Singapore dollar, the most dangerous thing in finance is the "thing" that never moves. This stability creates an illusion of control around which many positions are built, the greater the perceived stability the greater the positions, and the more other assumptions and forecasts are made.

Then in November Brad mentioned that:

A bull market in the US Dollar is underway and its magnitude and duration are likely to catch everyone by surprise. I believe it isn't out of the question for the USD Index to advance by at least 50% within the next 5 years. If this forecast proves correct, there will be profound ramifications for the global economy and many financial markets, particularly emerging markets.

Not to beat a dead horse earlier this month we detailed further reasons to get long USD and short yuan.

We believe this trade has some legs and though volatility is no longer as cheap as it was when Brad first began yelling from the rooftops we believe we've some ways to go in this yet.

Since we believe it's of such importance over the coming 2015 year we're putting the finishing touches to a comprehensive guide to profiting from this which we'll be sending to subscribers. If you're not already on our list make sure you're on it :)

With that prelude I wanted to share an article on recent events in Russia (RSX) from our sister site Emerging Frontiers which covers the frontier and emerging markets.

These are the messages that blared forth from my TV screen and broker notes this morning. Monday - hereafter branded as "Red Monday" - was a day of reckoning for the Russian economy. The schadenfreude on display in Western media is nearly as relentless as the ruble's sell-off:

"It couldn't happen to a nicer guy" - WSJ, on Putin

Let's disregard the fact that Secretary Kerry may be a bit premature with the sanctimony after two years of diplomatic outmaneuvering and general поражении (beatings) at Putin's hands in Syria, Libya, and Ukraine. It might be easy to get caught up in the media hype around yet another Russian currency crisis, but time can be better spent in considering what Putin's next moves might be, and the ramifications for the global economy.

Few will disagree that Vladimir Putin is easily the most effective head of state on today's world stage. Americans may not like him, but Russians love and adore him. Trust me on this one, Mr Putin is not going anywhere and the only effective outcome of Kerry's sanctions has been to unite the Russian people in defense of their president.

Let's quickly recap the facts as we know them now: 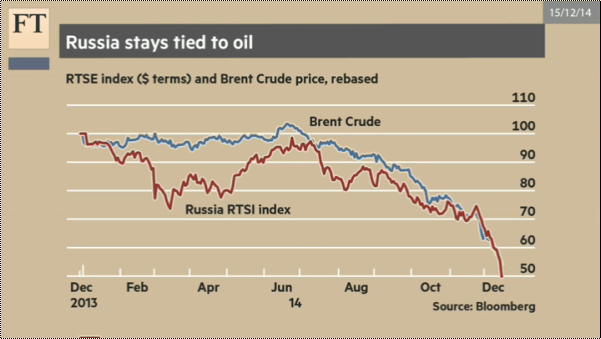 All of this information is readily available - but what does this mean for the global markets? How can we predict the "second bounce of the ball" or the unintended consequences of the Russian implosion?

I lived and worked in Moscow for a couple of years, and during my tenure the RUB never breached the 32 handle. This morning a friend told me via email that middle-class Muscovites are piling into IKEA, 7th Continent and other large retailers to buy every consumer good on the shelves before the inevitable mark-ups are applied. I only wish that I were there to load up on deeply-discounted bottles of Kalashnikov vodka - a much better souvenir than the NFL-themed matryoshka dolls from the tourist traps at Ismailovskiy Park.

It is virtually indisputable that Russia will experience a painful recession next year; their economy's most significant shortcoming is its near-total reliance on resource exports. Russia's break-even production cost of crude oil is just over $100, so the country's famed $400bn "stabilization fund" will soon begin to draw down. Russia has its problems, to be sure, but their fiscal policy has actually been quite solid since they launched this fund in 2004 to mitigate volatility in the crude oil market.

Let's tick off some other, lesser-known (but no less true) facts:

Make no mistake, this sell-off is a big problem - not just for Russia, or for the other over-levered emerging market currencies (TRY, INR, ZAR) that stand to be traumatized by a rising US dollar, but ultimately even for the US itself. As US capacity utilization returns to pre-2001 levels, and inflation gains momentum, dollar-pegged currencies around the world are about to come under increasing strain. I expect that Putin's plans to chip away at the global reserve currency - the US Dollar - are about to shift into high gear.

I'll be watching this situation closely. In the meantime, some food for thought... it might be time for investors to give some serious thought to the major Russian names out there. Here is what I saw in the GDRs this morning...

Of course one must remember that these companies' ability to pay such attractive yields may be imperiled by crude prices that are currently 40% below Russia's production break-even. Nonetheless, it's indisputable that there are going to be some real bargains in this market. (Disclosure: I own all of the stocks on this list in my personal account. This is not a recommendation; make your own decisions please!)

I'll write more about this in a few days. I'm increasingly of the opinion that 2015 is going to be a year that investors will someday tell their grandchildren about.

Certainly something to think about over the weekend which I hope you enjoy as much as I plan to. I'll be enjoying some quiet time and staying well away from any retail outlets where people will be amassing in force trying desperately to figure out what to buy for people who don't need anything and who in turn will be out doing the same thing, all the while maintaining the same fake enthusiasm for Christmas as North Koreans did for Jim Jong Il.

"Under the most negative external economic scenario, this situation can last two years." - Vladimir Putin on 18 December, 2014

The author wrote this article themselves, and it expresses their own opinions. The author is not receiving compensation for it. The author has no business relationship with any company whose stock is mentioned in this article.