After my last case study on a Bakken shale well, I decide to study another long history Bakken shale oil well, with no re-fracing done, to see how the classical Arps type curve, and my modified version works in projecting the long term productivity of the well.

I want to demonstrate that the classical Arps formula, which the shale industry loves to use to project the EURs (Estimated Ultimate Recovery), tend to result in unrealistically high EURs, and that the long term productivity of the shale wells generally fall way below the industry's projections. A well that wasn't re-stimulated during its history will adequately reflect how the well's productivity declines naturally over time.

Let's re-cap about the classical Arps formula and how I modified it: 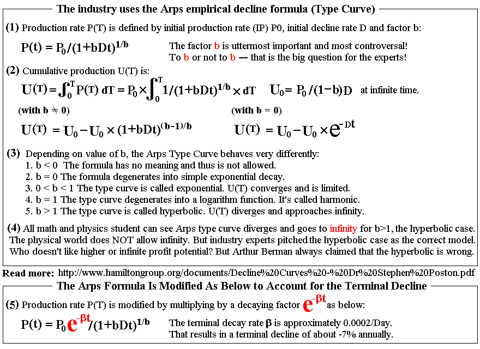 Geologists Arthur Berman often criticized the industry for using the classical Arps formula which exhibit a hyperbolic decline with the long term decline rate approaching zero. In reality, shale wells exhibit a non-zero terminal decline, so they fall far behind the projections of the Arps formula in the long term. I agree with Berman. I proposed to add a exponential decaying factor to account for the terminal decline. See the chart above.

This decay rate beta is small, so in the short term it makes little difference, but in the long term, it makes a huge difference. Let me use real production data to find out which one is right.

The Bakken well I study is Federal 14-24H, well No. 15776. The link contains data on that well. The well was developed by Whiting Petroleum Corp. (WLL). Production started on Sep. 22, 2005. So it has seven years of production. That's longer than the XTO Energy operated Sveen 34X-14 that I discussed in my last article. XTO is now part of Exxon Mobil (XOM).

See the monthly production data below. All the monthly days of production are full months, suggesting that production was never interrupted by any re-fracing operations or shut-downs. 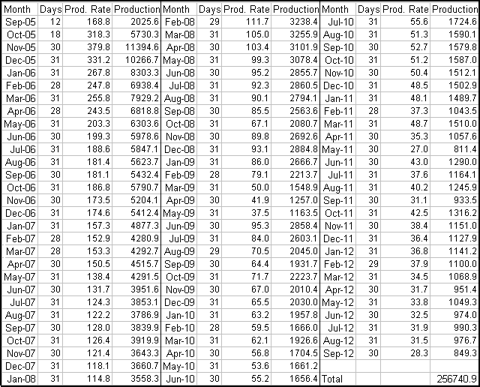 This well is the kind of best performing shale wells that the industry would love to pitch to investors. When it started, it was one of the highest producing well at the time. The well decline was also one of the slowest. First year production decline was only 55%. Compare that to the 80%-85% first year decline in the latest Bakken wells!

I found the following parameters to fit the actual production using both the classical and modified Arps formula:

Note that the long term decay factor Beta=0.000333/day is higher than the 0.0002/day I found for the Sveen 34X-14 well. So although the initial decline of the older wells flatten out faster, its longer term decline is actually steeper. The shale producers just can not gain.

Here are projections from each formula compared to actual data: 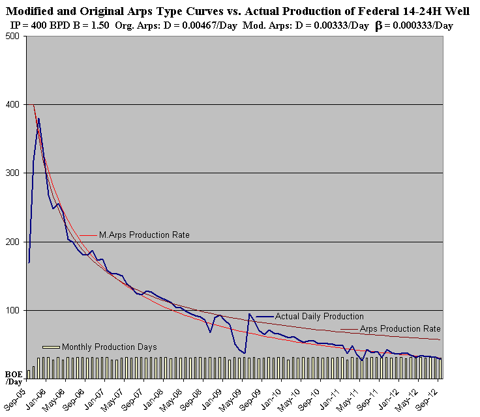 This deviation is what Arthur Berman has been criticizing about. The data agrees with Arthur Berman and me in exhibiting continued decline beyond three years. The industry's classical Arps formula fails to follow the long trend.

We can see the deviation more clearly when we plot the graph in logarithm scale, as shown below: 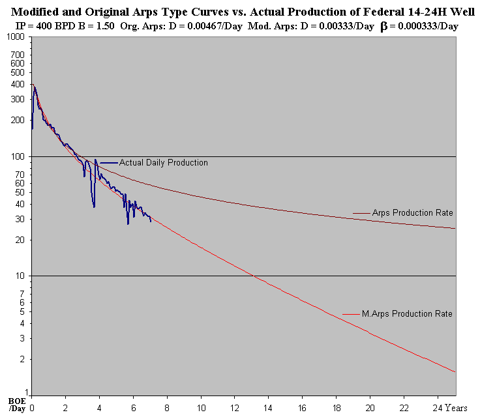 As a result, the cumulative production also follows the projection of the modified Arps. It deviates from the classical Arps curve: 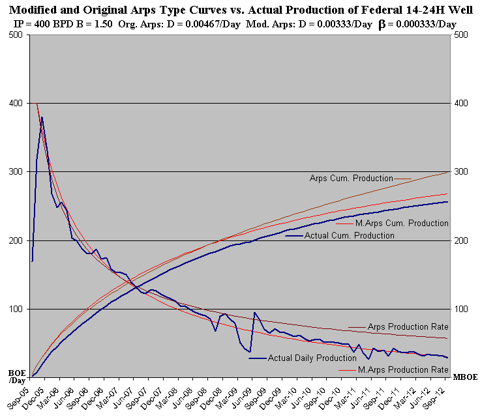 The deviation of cumulative production is more clear when we plot the longer term trend as below: 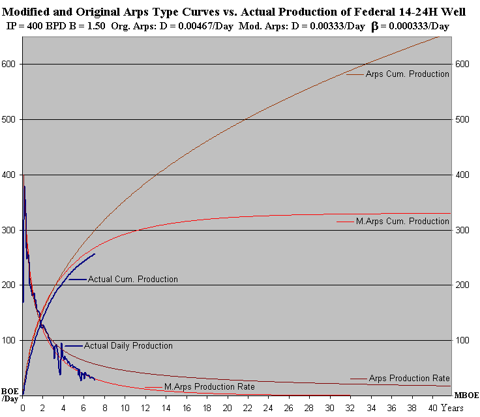 The Well Data Disagrees with EUR from Classical Arps Formula

As of today, the well has produced for 7 years. The accumulative production is 257 MBOE. How much more can it produce?

This is not much higher than the 20 BOE/day cut off threshold.

My modified Arps formula projects a production rate of 30.84 BOE/Day here. It seems to agree with the data pretty well. The model projects a current decline of roughly 0.000583/Day, or 19% decline annually!

If this decline rate continues and we continue to produce until the production rate is almost zero, the remaining production will be 30.84 BPD / 0.000583 = 53 MBOE. If we cut off at a threshold:

I think the ultimate production of this well will be 280 MBOE, or roughly 44% of the EUR calculated from classical Arps formula.

There are mounting indisputable evidences that critics like Arthur Berman are right. The shale industry has systematically exaggerated EUR projects of shale wells by more than a double. More over, they systematically under-calculated the armortization of the capital expenditures as the wells deplete much faster than they expected.

Is there a Ponzi Scheme going on in the shale oil and gas industry? I will let others do the finger pointing. But as an independent investor, I have repeatedly warned people that they should NOT take the rosy pitches from shale development companies at face value. They should always take the projections with a grain of salt, and do their one data analysis to find out the truth. I encourage people to follow my math analysis to find out the reality.

I keep urging people to get out the shale oil and gas sector, and get into the coal sector. People wrongly believe this meme that:

Just think about how big an investment opportunity it will be when people find out the truth, and shift their investment money from shale gas to coal. Currently there is a huge disparity that for every $75 people spend investing in the shale oil and gas sector, only $1 is invested in the US coal sector. I expect the ratio to be reversed to the other way, for every $1 people invest in the shale sector, there will be $10 invested in coal instead.