Let me discuss how a super bull cycle can be made in coal, or in any commodity. SA contributor Paulo Santos made this comment on PCX:

"PCX is already running a current account deficit, no surprise that people would be somewhat scared."

Indeed cash of Patriot Coal (PCX) dropped from $194M to $115M during Q1 of 2012. I pointed out that coal inventory is cash liquidity to a coal company. Coal can be promptly sold for cash. The coal inventory of PCX increased by $56.337M while cash dropped by $79M. If PCX needs cash, they can slow down production and sell off the coal inventory, to unlock the cash.

That reminds me one great reason why coal producers are so quick in cutting production when the market turns against them, as shown in the chart below: 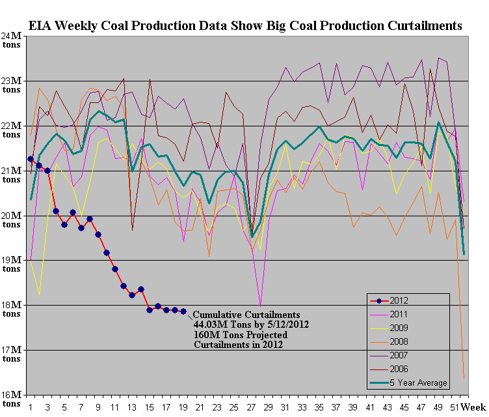 Rhodium is absolutely price inelastic, both on the supply side (it's a minor by-product, so higher price does not lead to higher supply), and on the demand side (it has no replacement and must be used). But more importantly, if the industry users had the foresight to try to stockpile some rhodium while it was cheap, they would never be forced to buy rhodium at $11000/ounce.

Absolute price inelasticity and a complete lack of inventory were the reasons for extreme rhodium super bull cycles. These two factors combined can create a super bull cycle for any commodity. I still do not understand why the industry never thought of building a rhodium inventory to absorb price shocks. Any one knows?

Gold (GLD) price could never go as crazy as rhodium. The world has a gold inventory worth a thousand years of supply. We will never run out of gold. Any time gold price goes up 5% or 10%; there is always some one who will sell some ounces of gold.

For coal, we have price inelasticity on the demand side. When a utility company is about to run out of coal stockpile, it will pay any price to get coal supply so as not to interrupt electricity supply.

Cash liquidity is the blood stream of any business. When the cash is running short, all business activity grinds to a halt. In recent years, the general trend is to squeeze all excessive to achieve the goal of zero inventory (or JIT, Just-In-Time) and maximum cash liquidity.

Many sectors employ the JIT strategies to minimize inventory and maximize cash liquidity. When you shop in Wal-Mart (WMT) or Costco (COST), you notice there is no warehouse behind the walls of the big boxes. What's on the shelves are all you get. When a merchant is sold out, delivery trucks bring some more in, enough for a few more days.

Likewise, automakers like GM (GM) and Ford (F) schedule productions so that auto parts are produced just days before they are used to assembly cars, thus warehouses and inventories are eliminated.

Such strategy minimizes costs of businesses and maximizes profits. But it renders the system vulnerable to disruptions, as there will be nothing to count on when supplies cannot keep up.

Coal is a critical energy source. Production of coal is pretty even throughout the year. But consumption of coal has big seasonal variations. The economy must keep an adequate coal inventory so that supply is adequate during the summer peak power season when utilities burn coal faster than coal producers can produce them.

Distressed Electricity Prices Are Telling Us Something!

Something odd happened in the electricity market. Yesterday Mid-Columbia, firm on peak, spot electricity was selling for only $3.84 per mega-watt-hour. That's 0.384 pennies per KWH. This is not the first time I see such super low electricity spot price. It has remained low for recent days. Electricity has never been this cheap before: 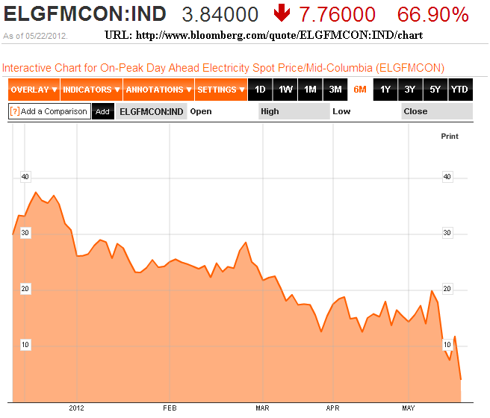 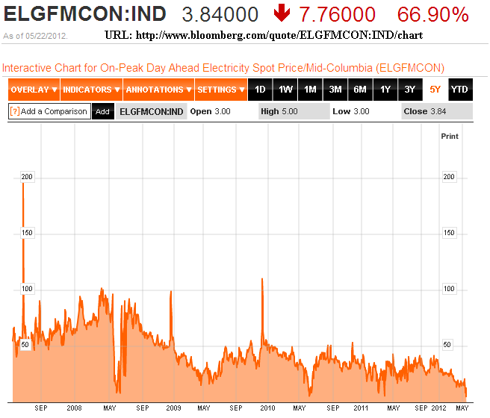 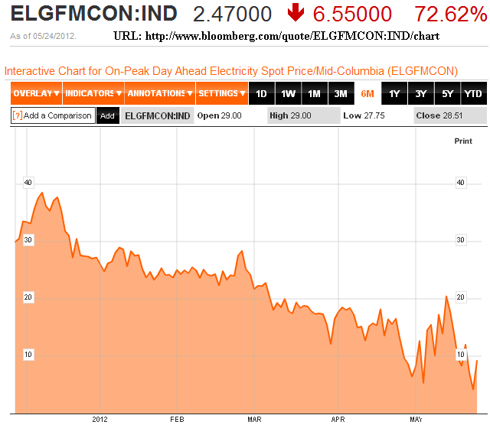 I did some calculation based on EIA data. It costs 0.538 tons of coal or 7.752mmBtu of natural gas to generate one MWH of electricity. (See cell H44 and I44 in the data table) Currently, per MWH cost is $30 in coal and about the same in natural gas.

I think there is one logical explanation. Electricity priced had remained low for the most part of the winter. The power companies must have received far less electricity revenue recently. Some utilities must be having tight cash liquidity by now. They would need some quick cash. So they must sell electricity at any price to get cash. They probably have little cash to purchase and replenish coal stockpile either.

If utilities indeed have tight cash liquidities, it explains both the recent plummet of electricity prices and coal prices, amid a strong rally in natural gas prices.

In both cases, the end result will be depletion of coal stockpile at utilities and a quick recovery of electricity prices, allowing utilities to replenish cash and start to buy coal again.

But in today's case, current electricity price collapse happens in early summer, a time when utilities traditionally stock up coal to prepare for the summer peak power season. It looks like this year they are unable to stock up coal due to low cash liquidity.

If my speculation above is correct, the industry is setting up for an incredible coal rally with panic buying once the summer starts. Any one has an alternative explanation why electricity was sold at $3.84 per MWH yesterday? I would like to hear it, as I can't think of any.

Coal producer have to worry about their liquidity as well. Their cash is tied up in coal inventories. When customers call in to renege on coal deliveries, executives must swiftly shut down production and sell down the existing coal inventory. Their top priority is NOT to stockpile coal, but to minimize the inventory and maximize cash at hand. That's a prudent decision for any business to survive.

Tuesday's plummet of Patriot Coal (PCX) shares due to a bankruptcy speculation was a good example. The CEO immediate issued a letter to employees, stating that the company is actively adjusting production and cut costs to mitigate challenging market conditions. The letter was up-beat, as the CEO stated: "in 2009 we successfully navigated through one of the greatest market dislocations in history. I am confident we will do so again".

Once the company issued the statements, the panic in PCX subdued. One of the reasons that shareholder felt easier is that PCX stated that they continue to have access to the current credit facility, thus they do not see a serious liquidity issue in near term. I will bet the company must be doing other things to preserve cash liquidity, including selling down their coal inventory.

I understand now why the coal industry engages in such massive production curtailments, cutting several times more than the expected reduction in demand. I thought it was due to physical limit of inventory space. But a bigger reason is they need to sell down coal inventories to maximize their cash holdings at this difficult time.

Are both utilities and coal producers reducing coal inventories as I speculated? Although I have no hard evidence, such speculation is logical and reasonable. It explains everything we see in the market. According to EIA's coal stockpile data, utilities stockpiled 187M tons of coal as of end of February 2012. There is no newer data yet. What I know is that based on EIA data, coal production cuts did not kick into full gear until week 9, well into March. Why such massive curtailments have failed to boost coal prices so far? Utilities must not be actively buying ad stocking up coal like they used to do in early summers.

This is exactly what makes a super bull cycle in coal today: At the times when the coal sector needs to stock up to prepare for the summer peak season, no one wants to a stockpile. Every one worries about cash liquidity and tries to get rid of inventories fast.

Summer is just one month away. When the coal demand picks up and production cannot keep up the pace, they will discover that there is no adequate coal inventory any where in the country.

What happens next? There will be panic buying! The coal price will be sent to sky high! We will see a coal rally much bigger than the 2007 to 2008 rally. Have you geared up for this unprecedented super coal rally?

I am heavily invested in coal. I am dismayed as every other coal investors that while natural gas price is already flying, coal price remains depressed, despite of massive production curtailments.

But now I understand! The coal price remain depressed only because utilities are still trying to sell down their existing inventory fast and not spending cash to replenish the stockpile as they should.

Before long, they will have sold the last ton of coal in their stockpile. Coal prices will then immediately explode upwards. When that will be? It won't take long but I don't know when. Just watch the electricity price daily. If it remains ridiculous low, it means utilities are still doing the stupid thing of burning down fuel to generate electricity at a loss. The moment electricity price returns to normal, it will be the turning point that utilities stop bleeding and start to replenish coal stockpile.

I continue to recommend these are great values in coal:

I think the coal turn around will be abrupt!