Rudi Bester is a businessman, serial entrepreneur, equities trader and value investor. His investment preferences include identifying undervalued large cap stocks to hold longer term. Higher risk/growth, small-cap stocks round out his personal investment portfolio. He also assists and counsels small technology innovators who require working capital. Rudi graduated with a major in Marketing Management (South Africa) and a MBA in Leadership & Sustainability (UK). In his most recent full-time employment role, Rudi held the position of Executive Vice President for a publicly traded Canadian corporation that was acquired by Morgan Stanley in 2019. Rudi's family foundation is Memory Trees, a registered 501(c)(3) non-profit with a simple mission: "No Poverty". The tax exempt organization offers Donor Advised Fund (DAF) administration to high net worth individuals and entities. Memory Trees strives to deliver simple solutions to complex problems, like hunger. Learn more at www.memorytrees.co. He founded the Equity Connection on LinkedIn, a networking group with over 1,500 members. Rudi can be followed on YouTube at https://youtu.be/wGOz_XkEbog 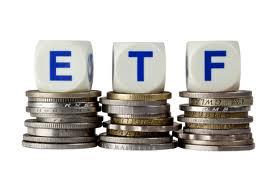 People invest in many different types of vehicles, or investment instruments. In this post, we'll briefly explore an ETF and compare it to its most logical alternative investment choice.

ETF = Exchange Traded Fund. It's an investment that is traded just like other company equity on a stock exchange, e.g. the NYSE. The key elements included in this short description are that an ETF can be traded like stock (i.e. via an online brokerage account), and - perhaps more importantly - that an ETF is a fund, not dissimilar to a mutual fund or other 'basket' of investments.

An ETF therefore holds a variety of assets like stocks, commodities, or bonds. These funds then typically track or mimic another index, such as the Dow Jones Industrial Index (commonly called the 'Dow'; and widely regarded as a primary benchmark of the day's stock market activity).

Unlike owning stock, ETF investments are typically subject to annual fees, although the fees (or costs) related to ETF investments are generally lower than comparative fund investment instruments, like mutual funds. Investors who trade ETFs are trading their shares on a secondary market, but I'll provide more information about that later, on another posting.

ETFs have been available in the US for about 20 years. In 1998, State Street Global Advisors issued an ETF for investment, called SPDR Dow Jones Industrial Average, traded under the ticker symbol "DIA". I picked this one as an example, because it will allow me to compare DIA to the Dow, which itself is a basket and index of 30 'giant' stocks. You can view the large corporations that are included in the Dow here.

The basket of stocks included in DIA is described in their prospectus, which you can view here. Their top fund holdings include these Dow heavyweights:

Any investor could mimic DIA (in other words you could buy the same stocks as the super smart fund managers at State Street), without having to pay any fees (other than one-time brokerage commission when you buy the stock).

The top fund holdings listed above gross up to just over 55% of the DIA fund's investments (we didn't investigate the other 45%). Remember that State Street has skilled traders who are able to open and close positions (buy and sell stocks) quickly and expertly, and who are using smarter trading tools than amateur investors have, etc. One could therefore argue that paying a low annual fee may be worthwhile for the expertise State Street Advisors offer in managing your investment (according to the Morningstar Investor Research website, State Street's fees for DIA is <0.5% annually).

So let's assume you have $10,000 available for investment. You could buy about 76 shares of DIA (current price ~$130), or you could buy $1,000 worth of shares in each of the 'ten fund top holdings' above (respectively), and end up more or less in the same place.

The difference on an ongoing basis would be nominal, but may become significant over the longer term. There are pros and cons both sides of the equation: If you buy DIA, you only have to make one purchase, but you incur a nominal ongoing 'fund management' fee. If you were to buy the 10 different stocks directly you would own them outright after paying brokerage commissions (no future fees). But... you would then be required to manage your investments 'self-serve' and pay attention to your investments to mitigate financial loss in the longer term. Many people would prefer to have a professional fund manager doing this on their behalf, especially at minimal ongoing cost. However... even a minimal fee compounded, e.g. over 20 years, adds up to an amount of lost savings that could be considered material to your investment portfolio value in the future.

On the graph above I've compared the performance of DIA vs. 5 Dow stocks for the previous 5 years. The DIA performance is reflected by the light blue line at the bottom. The 5 Dow stocks were selected because of recent mixed performance. What's observationally interesting is that all the stocks, along with DIA, follow more or less the same pattern in the graph.

What's more important is that the 30 stocks that make up the Dow, have consistently delivered about 6-7% year over year, for more than 100 years. This average includes major events that had impacted the stock market, e.g. pre-war recession, 9/11 events, the 2008/09 financial market meltdown, etc.

So, instead of having cash safely tucked away under your mattress or in a bank savings account, you should know that you could have a consistent return of around 7% by simply investing in a basket of Dow stocks, longer term. I'm very confident that this beats the return paid by your bank on savings accounts!

However, three further points of clarification are required: (1) find a great company to invest in and buy it - i.e. don't trade these stocks regularly, because if you do, you will likely lose money; (2) reinvest all dividends while you're earning an income - i.e. don't withdraw any gains unless you absolutely need the cash; and (3) buy when it's red and sell when it's green - i.e. when blue chip stocks go down e.g. because of quarterly results, that's usually a signal to buy; and if the stock you already own is in the red, don't sell unless there's a compelling reason to do so!

The objective is simply never to take a loss, because over the longer term, you never really need to, if you invest in a basket of Dow stocks.

Disclosure: I am long MCD.