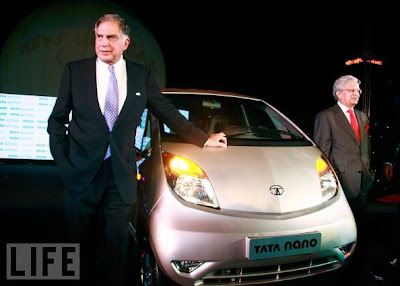 In March 2009 Tata Motors India launched the world lowest priced car called the Nano initially priced at $2,000.00. This week I’ve got a short sell on Tata Motors India Ticker TTM. It’s an ADR on the NYSE with about an $18 billion market cap. I’m betting on a continued downtrend in the India, US as well as the global markets, although the markets are experiencing a rebound this last week from the huge sell-off two weeks ago.

Long-term Tata Motors is a buy, but at lower prices I believe. See more price position commentary below. India’s Sensex index has been under distribution since November 01, 2010 from its 21,004.96 all time high, and I’m betting on continued selling pressure which could see the Indian benchmark index hit 16,000 from its current 18,815.64 as of Friday March 25, 2011.

According to Zacks Investment Research, on March 16, 2011, Tata Motors Ltd. posted an 18.4% rise in sales of wholesale vehicles to 102,411 units in February. Out of this, commercial vehicles, including Tata, Tata Daewoo and the Tata Hispano Carrocera, totaled 46,747 units, a growth of 10% from the prior year. Meanwhile, passenger vehicles totaled 55,664, up 18% from the same month in 2010.

March 22, 2011, Tata Motors Ltd announced the increase in prices of some of its passenger and utility vehicles, effective from the first day of April, 2011. The decision to raise prices of vehicles comes on the back of an unavoidable surge in input costs and a hike in interest rates, despite the cost control measures by the company.

The global auto industry, including the Indian car market, is improving at a galloping pace mainly driven by the flourishing middle class, rising salaries, growing employment opportunities, infrastructure development and easier access to car loans. Moreover, shifting of manufacturing facilities to low cost destinations such as China and India by global automakers and creation of joint ventures and alliances with the domestic companies by the same are providing additional momentum to the booming auto industry worldwide. Inspired by these improvements, global passenger car sales are projected to reach 76 million units by 2015.

However, gradual rise in input costs and interest rates are the potential headwinds for the growing prosperity in the auto industry. Steel prices and prices of tires have gone up considerably. These factors are likely to make cars more expensive, thereby limiting its demand. Tata Motors Ltd has decided to start exporting its Nano minicars to Indonesia, Thailand, Sri Lanka and Africa by December this year with an objective to boost its sales and in turn reducing its dependency on the domestic market.

However, Tata Motors has been exporting many other models, particularly trucks and buses to more than 30 countries and cars and sport-utility vehicles to 16 countries.

In the first phase only 1,000 nano cars will be exported to the selected regions as stated above. According to the company, these destinations have been initially chosen based on the fact that these markets are almost similar to the Indian market having identical tastes, preferences and requirements.

Thus the existing Nano models hardly require any major modification before being exported. Successful export in these regions will provide sufficient incentive to Tata Motors to venture into the western markets where safety and emission standards are very stringent.

Moreover, the company’s aim to expand its business further will be fulfilled on the back of huge demand for India-made cars and motorcycles in the developing markets of Southeast Asia and Africa because of their lower prices and higher fuel-efficiency. The oval-shaped Nano, which is powered by a 624-cubic centimeter gasoline engine, costs INR 137,555 ($3,043 approximately) for the base model at showrooms in New Delhi.

Moreover, Tata Motors wants to reach the break-even profit point as soon as possible, where it has invested INR 20 billion ($442 million) for building a whole new factory in Gujarat dedicated to Nano.

I’m betting on continued price pressure on Tata motors shares because of the current higher input costs resulting in higher prices for their cars resulting in very possible demand destruction for a time. Long-term I see Tata as a good growth stock to own, but not its current price. I would suggest to possibly start accumulating Tata at 20 and below. 15 looks like a very nice area of major long-term support to buy in at considering its March 2009 low of about 4.00 and the November 29, 2010 of 35.27. Tata Motors current PE ratio is about 27, and offers about a 1% dividend yield. Average daily volume share turnover is 2 million plus.

Tata Motors Limited, an automobile company, engages in the manufacture and sale of commercial and passenger vehicles primarily in India. The company offers cars, utility vehicles, trucks, buses, and defense vehicles, as well as develops electric and hybrid vehicles for personal and public transportation. It also involves in distributing and marketing cars; and financing the vehicles sold by the company. In addition, the company engages in the provision of engineering and automotive solutions, as well as machine tools and factory automation solutions; construction equipment manufacturing; automotive vehicle components manufacturing and supply chain activities; tooling and plastic and electronic components for automotive and computer applications; and automotive retailing and service operations. It offers its products and services through its dealership, sales, services, and spare parts network. The company also markets its commercial and passenger vehicles in Europe, Africa, the Middle East, South East Asia, South Asia, and South America. The company was formerly known as Tata Engineering and Locomotive Company Limited and changed its name to Tata Motors Limited in July 2003. Tata Motors Limited was founded in 1945 and is based in Mumbai, India.

Click the Tata Motors India Ltd stock chart below for a larger view.