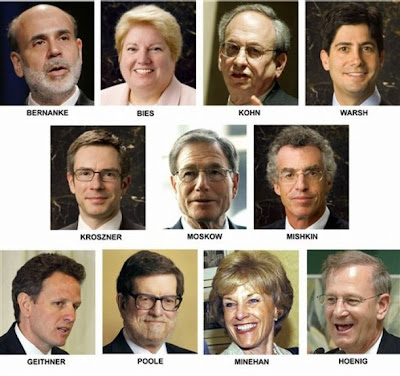 Can the Fed and Economists Forecast the Future? See This Startling Chart.

Gabriel Wisdom: "Ben Bernanke, the chairman of the Federal Reserve, says the economy is slowing but there's faster growth ahead. Is he wrong?"

Pete Kendall: "Economists are extrapolationists. They tend to look at what's happening in the economy and extrapolate that forward. So here we have a situation where not just Bernanke but economists in general are looking at... what they call the 'soft patch' and somehow contorting that into growth later in the year.

Pete's startling reply flatly contradicts conventional wisdom. Most people believe that the Fed really is able to anticipate the economic future. After all, they're the most "qualified." But what do the facts say?

Pete's Elliott Wave Financial Forecast Co-Editor Steve Hochberg recently included this eye-opening chart (from Societe Generale Equity Research) in his new subscriber-exclusive video, "Buy and Hold, or Sell and Fold: Where Are The Markets Headed in 2011? 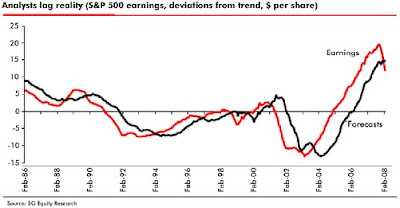 The red line in the chart is the S&P earnings, and the black line shows economists' forecasts relative to those earnings. Here's what James Montier, head of equity research for Societe Generale, said about it:

That comment is spot-on. In 2002-2003, as you can see, earnings turned up despite economists' forecasts for earning declines. It took them a while to "turn the ship around" and play catch-up with the trend.

Yet in 2007-2008, earnings turned down -- despite the forecast by economists for continued increases. The devastating truth is that earnings did more than fall in the first quarter of 2008: they had their first negative quarter in the history of the S&P. As Steve said in his subscriber video, "Economists were wrong to a record degree" -- and investors felt the pain.

So what's the point? Economists do extrapolate the trend. That approach works fine, until it doesn't­ -- and you're on the hook.

Elliott wave analysis never extrapolates trends -- it anticipates them. The Wave Principle recognizes that markets must rise and fall -- and that they unfold according to changes in investor psychology, in a way that is patterned and recognizable.

Most people believe that the Fed really is able to anticipate the economic future. Now you know the facts. Uncover other important myths and misconceptions about the economy and the markets by reading Market Myths Exposed.

EWI's free Market Myths Exposed 33-page eBook takes the 10 most dangerous investment myths head on and exposes the truth about each in a way every investor can understand. Download your free copy now.

Click the link below to review more Elliott Wave analysis and trading software.
To ensure this doesn’t happen in the future, please enable Javascript and cookies in your browser.
Is this happening to you frequently? Please report it on our feedback forum.
If you have an ad-blocker enabled you may be blocked from proceeding. Please disable your ad-blocker and refresh.