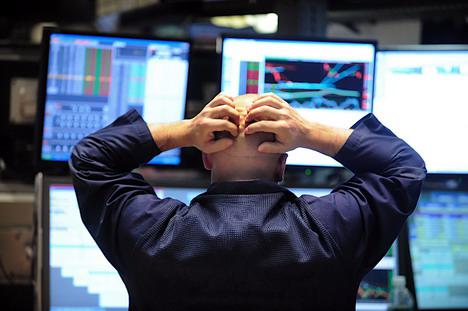 May 15, 2012 - Scared to Death Investing in the Stock Market - By Elliott Wave International

Within a few years of those previous two peaks and the plunges that followed, average investors eased back into stocks. Not this time. After this recent financial crisis, the evidence suggests that investors have said "enough!"

Trading in the United States stock market has not only failed to recover since the 2008 financial crisis, it has continued to fall. In April, the average daily trades in American stocks on all exchanges stood at nearly half of its peak in 2008: 6.5 billion compared with 12.1 billion . . . New York Times, May 7

During Q1 of 2012, trading on the New York Stock Exchange was down 23 percent vs. last year.

But if many individual investors have stayed out of the market, how has the S&P 500 more than doubled?

Well, the investors who have remained in the stock market are willing to pay higher prices. A lot of that buying power comes from institutional investors. And with their enormous liquidity, they also use massive leverage:

Extreme leverage (30x and higher) from investment institutions is one of the reasons that stocks are priced as high as they are today. Elliott Wave Theorist, March

Yet we've just witnessed one more reminder of what happens when big institutional trades go sour. Initial reports of $2-billion in trading losses by J.P. Morgan have climbed much higher:

JPMorgan's London desk . . . placed massive bets on credit derivative swaps to hedge another position. As markets moved against...the London desk, the losses escalated; JPMorgan estimates the losses could be as big as $4 billion. Forbes, May 14

Keep in mind: this "egregious mistake" happened at a bank with a reputation for being one of Wall Street's best. One can only wonder what's going on at other financial institutions. What might be revealed next?

J.P. Morgan's share price plummeted nine percent on May 11 and kept falling through May 14. Other major banks were also in the red. But even before the JPMorgan trading fiasco, financial stocks have long been underperformers: 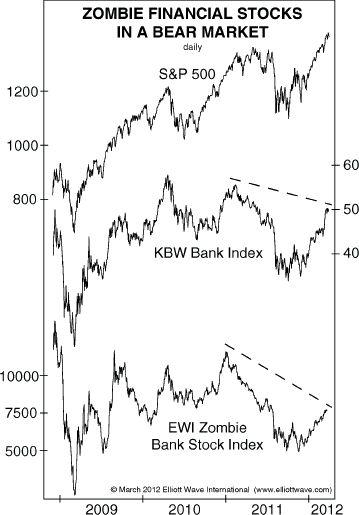 The chart is from the March Financial Forecast, which provided commentary on the most recent Federal Reserve "stress test" for banks:

. . . shocks will probably exceed the level of stress considered by the Fed. A key tip-off to the financial system's lack of preparedness for the next leg of decline is the long-standing underperformance of the financial stocks. They are lagging the rally from the 2009 low, just as they did in 2007...The second line on the [chart above] is the KBW Bank Index...the divergence is more than twice as long as it was in 2007.

Will the investors who left the market in 2008 and missed the rally that came afterwards be glad they got out and stayed out?

Review our Elliott wave labeled charts and learn our specific forecasts for 30-days with no risk.

You'll then understand why Robert Prechter told an interviewer in 2010 "I'm convinced that by the end of this decade people are going to feel even more negative towards stocks than they did in the '40s. They'll tell their children and grandchildren not to touch the stock market."

You can have our flagship Financial Forecast Service on your computer screen in just a few minutes by clicking the link above.

Your risk-free subscription saves you 24% and gets you instant online access to: 1. Short Term Update (Mon, Wed, Fri). You get latest forecasts 3 times a week, after the close.

3. Elliott Wave Theorist (Monthly). Prechter's cutting-edge view into when, where, and why the waves are unfolding.

Click the links above to learn more about the Financial Forecast Service Elliott Wave Theorist.