Deflation and the Stock Market

The Fed and the government quite effectively advertise their efforts to inflate the supply of money and credit. But deflationary forces, to most eyes, are invisible. I thought I would point some of them out.

1. Banks Are about 95 Percent Invested in Mortgages 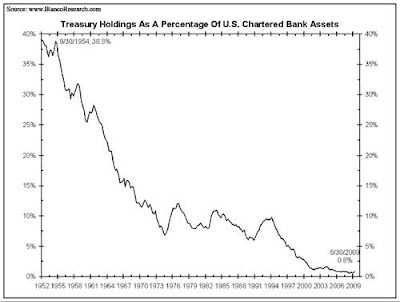 Figure 4, courtesy of Bianco Research, shows that U.S. banks used to be fairly conservative, holding 40 percent of their assets in Treasury securities. This large investment in federal government debt, the basis of our “monetary” “system”, served as a stop-gap against deflation. In 1950, even if mortgages had been wiped out by a factor of 80 percent, banks still would have been 50% solvent and 40% liquid. Today, banks hold federal agency securities (backed mostly by mortgages), mortgage-backed securities (meaning complicated packages of mortgages), plain old mortgages that they financed themselves, and a few business loan contracts. If these mortgages become wiped out by a factor of 80 percent, which in turn would cause many of the business loans to go into default, the banks will be only about 22% solvent and 1% liquid. I believe the coming wipeout will be bigger than that, but let’s be conservative for now. The point is that, unlike Treasuries, IOUs with homes as collateral can fall in dollar value, and such IOUs are pretty much the only paper backing U.S. bank deposits. The potential for deflation here is tremendous.

2. More Mortgages Are Going Under

It has been well publicized recently that commercial real estate has been plunging in value as business tenants walk away from their leases, leaving properties empty. Zisler Capital Partners reports, “Returns were negative for the past five quarters, the longest streak since 1992. Property prices have fallen by 30 percent to 50 percent from their peaks. Much of the debt is likely worth about 50 percent of par, or less.” (Bloomberg, 11/11) Needless to say, the fact that commercial mortgages are plunging in value is stressing banks even further, which in turn restricts their lending. This trend is deflationary.

3. People Are Walking away from Their Homes and Mortgages

Great numbers of people are ceasing to pay their mortgages, even if they have the money to pay them. When people walk away from their mortgages, they are reneging on a promise to pay the interest on the loan. … Refusal to pay interest is deflationary. When banks can’t collect fully on their loan principal, as is the case by law in the above-named states, it is deflationary. Even in states where banks can go after other assets held by borrowers, default is still deflationary if the borrowers are broke. The reason is that, in all these cases, the value of the loan contract falls to the marketable value of the collateral, and a contraction in the value of debt is deflation.

Some people who walk away from their mortgages purposely damage the homes when they leave. New businesses have sprung up to take on the job of cleaning up the houses that former occupants trashed as they left. Angry defaulters are stripping coils out of stoves, pulling electrical wiring out of walls, ripping fixtures out of bathrooms, yanking seats off of toilets, punching holes in walls and leaving rotting food in the fridge. (AP, 8/9) Such actions, and the threat of more such actions, lower the value of the collateral behind mortgage debts, thereby lowering the value of mortgages, which is deflationary. 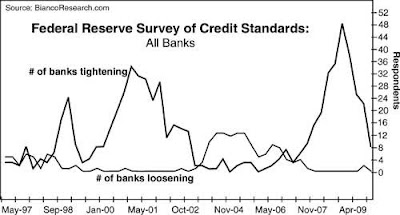 As people default on mortgages, banks are tightening lending standards. Figure 7 shows that banks loosened credit standards from late 2003 through the summer of 2007. By the end of that time, you could borrow money if you were breathing and could operate a ball-point pen. Banks have been tightening credit standards ever since. The rate of tightening peaked in October 2008, but the graph shows that over the past year various banks have either left their new, tighter standards in place or continued to tighten their standards further. Across the board, it is harder to get a loan, and it’s staying that way. Lending restrictions reduce the credit supply. This condition is deflationary.

5. Banks Are Cashing Out of the Credit-Card Business 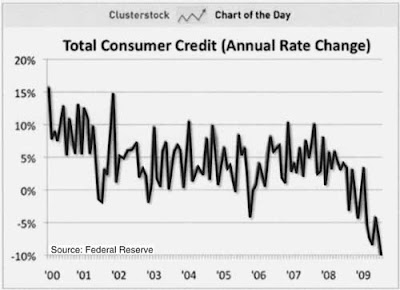 Articles have revealed that banks are doing everything they can to get credit-card debtors to pay off their cards. They are raising penalties and rates, lowering ceilings and otherwise bugging their clients to pay up, one way or another: Transfer your debt to another bank’s card; default; pay us off; we don’t care which. And it’s working. Through September, consumers have paid down credit card balances for 12 months in a row. Figure 8 shows the new trend. The credit-card business was another formerly humming engine of credit that is sputtering. You might call the new program “cash from clunkers,” and it is deflationary.

What Becomes of a Broken Stock Market?

There are two possible Elliott wave paths for stocks from here, but only one likely outcome.

Wall Street is looking for a smoking gun -- a trader's mistake, a computer glitch -- but nothing definite has been found yet.

If you're familiar with Elliott wave analysis, last week's shocking decline gets less mysterious. The chart you see below is from Robert Prechter's latest, May Elliott Wave Theorist. Notice the price area where the drop occurred.

The April-May Theorist series entitled "Deadly Bearish Big Picture" reveals a lucid picture for 2010-2016. It's the flipside of Robert Prechter's February 2009 Forecast for a 'Sharp and Scary' Rally. Click here for a free copy.

Why is that important? Because in Elliott wave analysis, .618 is a common Fibonacci reversal area for market corrections.

Based on the Dow's 300-year-long Elliott wave pattern, Prechter sees a huge difference now compared to the last two significant tops in 2000 and 2007. In fact, "This massive stock market top is preparation for something big," writes Bob.

The May 8 Theorist shows you two Elliott wave paths that stocks will likely take from here -- and both point in the same direction.

There is more -- you also discover the likely final outcome if this decline indeed develops into "something big": Prechter gives you his ultimate DJIA's price targets several years from now.