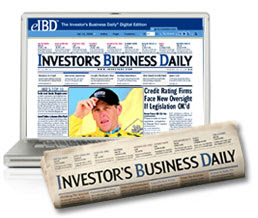 Will Big Investors Tune In To TV Listing Firm Rovi?

Today we're going to revisit a stock we last looked at a month ago. It's Rovi (ROVI) and its products help people find and then connect to TV shows, movies and music on any capable device they own. That technology is used by consumer electronics makers.

Rovi also creates electronic program listings for cable TV firms and other carriers. It was featured in an August 16th IBD 100 article, which noted the company is expected to release its Total Guide TV listing product this fall with two big electronics makers.

Rather than just a listing of what's playing on TV, it will also list other forms of entertainment like what's available at Blockbuster video or other download sites.

Sales were a little less impressive, coming in at 13% last quarter.

The stock has a B+ Accumulation/Distribution Rating. That means there's more buying than selling going on among big, professional investors.

And it's held up pretty well compared to the action in the broader market. By comparison, the Nasdaq has a D- Accumulation Distribution Rating.

Return on Equity is 10%. That's below the 17% minimum historically seen in the many leading stocks. That ratio measures how efficient the company is with the money shareholders have invested.

Mutual funds own about 43% of the firm's outstanding shares. And the number of funds owning the stock has risen in recent quarters, so that's a plus. 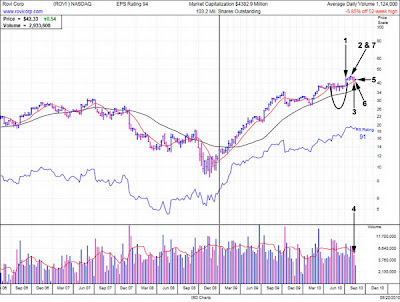 You see on the weekly chart that last month, the stock broke out of a base (Point 1).

As many of you know, base patterns are important because studies have shown that historically, many of the market's winning stocks formed these chart patterns, then went on to score big gains.

After its breakout, Rovi hit a new high (Point 2). But then as the action in the broader market became choppy earlier this month, it pulled back to its 10-week moving average line (Point 3).

Its pullback has been fairly orderly so far. Even last week, when the Nasdaq suffered a big drop, Rovi fell only slightly. And volume was below average (Point 4). So there weren't a lot of sellers rushing for the exits.

It found support at its 10-week line and now seems to be trying to bounce up from that line (Point 5).

Professional investors sometimes step in to buy shares near the 10-week line. And their buying power can launch sometimes launch a new run up for the stock.

So far, volume hasn't been very impressive. Watch to see if the stock continues to climb and the move happens in above-average volume.

If it does, the buying range would be between the 10-week moving average line (Point 6) and 5% above the peak in the pullback (Point 7).

Rovi's Composite Rating, EPS Rating and Relative Strength Rating are among the best in its industry group.

It's B+ Accumulation/Distribution Rating is also No. 1 in the group.


Disclosure: No Positions
To ensure this doesn’t happen in the future, please enable Javascript and cookies in your browser.
Is this happening to you frequently? Please report it on our feedback forum.
If you have an ad-blocker enabled you may be blocked from proceeding. Please disable your ad-blocker and refresh.