I developed the hedged portfolio method of investing at Portfolio Armor, and I run a Marketplace service at Seeking Alpha based on it called Bulletproof Investing.

As ETFguide.com reported recently, ETF assets rose by 27.6 percent in 2012, ending the year at $1.337 trillion, according to data from the Investment Company Institute. After the SPDR S&P 500 ETF (SPY) and the SPDR Gold Shares ETF (GLD), the Vanguard Emerging Market ETF (VWO) was the 3rd largest ETF by assets, with $61 billion.

On Friday, the Chicago Board Option Exchange's Emerging Markets ETF Volatility Index (VXEEM) dropped 5.1%. All else equal, as volatility declines, it becomes less expensive to hedge. Although VXEEM is based on another emerging markets ETF, the iShares Emerging Markets Index ETF (EEM), the top holdings of EEM and VWO are quite similar, so VXEEM is a relevant measure of volatility for VWO. With the drop in emerging markets volatility, in those post we'll look at two different ways of hedging a position in VWO against a greater-than-20% drop over the next several months.

Why Consider Hedging Against A >20% Drop

A twenty percent decline threshold is worth considering here, because it lowers the cost of hedging somewhat (all things equal, the larger the potential loss you are looking to hedge against, the less expensive it is to hedge), and because a 20% decline is not necessarily an insurmountable one. To recover from a 20% loss, an investor would need a 25% rebound in his stock. But to recover from, say, a 35% drop, would require a rebound of nearly 54%.

The first way uses optimal puts*; this way has a higher cost, but allows uncapped upside. These are the optimal puts, as of Friday's close, for an investor looking to hedge 1,000 shares of VWO against a greater-than-20% drop between now and September 20th: 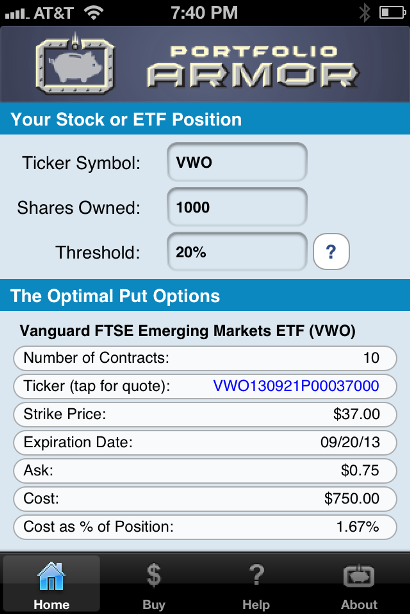 As you can see in the screen capture above, the cost of those optimal puts, as a percentage of position, is 1.67%. By way of comparison, the current cost of hedging the SPDR S&P 500 ETF (SPY) against the same decline, over the same time frame, is 0.99% of position value.

A VWO investor interested in hedging against the same, greater-than-20% decline between now and September 20th, but also willing to cap his potential upside at 11% over that time frame, could use the optimal collar** below to hedge instead.

As you can see at the bottom of the screen capture above, the net cost of this optimal collar is 0.67%.

*Optimal puts are the ones that will give you the level of protection you want at the lowest possible cost. Portfolio Armor uses an algorithm developed by a finance Ph.D to sort through and analyze all of the available puts for your stocks and ETFs, scanning for the optimal ones.

**The algorithm to scan for optimal collars was developed in conjunction with a post-doctoral fellow in the financial engineering department at Princeton University, and is currently available on the web version of Portfolio Armor.