Honesty is such a lonely word
Everyone is so untrue

It was a sluggish Monday, especially in New York, where it rained most of the day and the streets were oddly devoid of tourists, and traffic moved with ease even in front of Radio City Music Hall. I guess you could call it a blend of quiet calm with high anxiety. The Street thinks a deal is going to happen, although it's still a wildcard as to whether it happens before January 1, 2013. The worrisome part is what kind of deal we are going to get. Already the left is hailing Obama as "courageous," assuming a victory that really puts those rich bastards in their place.

I must say the Right seems to be bracing for the same thing.

More than likely we get a "balanced" framework that, in essence, sends this overtime game into extended play; however, unlike sports, the score will not be tied. Instead President Obama will have the edge, yet oddly some republicans think they'll have momentum - go figure. We are getting to the nitty-gritty part that soon will see big computer programs at the IRS and accounting firms readjusting assumptions. This means people will have to do likewise. Maybe the streets of Manhattan were virtually deserted because of Fiscal Cliff worries and not the inclement weather.

I'm not ready to draw that conclusion although those cheerleaders that feel the need to sugarcoat each disappointing economic data release are saying the "cliff" has already negatively impacted shopping. I don't think so. But, there will be a serious halt to commerce if people can't file taxes early and get those refund checks. A delay could change the entire tenure of the economy. We don't plunge off a cliff the first day, but the wheels will come off long enough to have an impact. But the big deal could come if we have to deal with a big lie.

I've written about this numerous times, how the Alternative Minimum Tax (AMT) was designed to go after about 160 families that weren't paying their fair share. That was 43 years ago and that tax wasn't indexed for inflation. So what began as a jihad on people with great accountants and tax loopholes, now casts a dark shadow on moderately successful Americans trying to climb what's left of the ladder. In the end, most will be saved, but the AMT will always hang like the sword of Damocles over middle income Americans.

The problem is it hangs over more and more people each year. (The cautionary tale is one day tomorrow's taxes on the "rich" will impact mere middle class earners.)

Politicians must keep the AMT in their budgets or find another $864.0 billion that it would raise over the next ten years. Here's the rub, since those assumptions never come true, those budgets begin with a gigantic lie and the financial hole has to be filled in a different manner. These days, too many voters are searching for tenderness as long as the next guy gets the shaft, yet the dangerous games being played just dig us into a deeper hole. In the meantime, if that AMT isn't patched up in time regular, decidedly not-wealthy, people will have to fork over as much as $5,000.

Talk about not shopping this holiday season - there would be a flood to the mall to get money back.

Everyone is so untrue.

News this morning shows that the new healthcare law has a $63.00 per head fee designed to cushion the blow for insurance companies shouldn't come as a surprise. Apparently the administration says it is only for three years and is an effort to raise $25.0 billion.

My initial reaction to the news is it reminds me of the Three Great Lies - the Obamacare Version.

> Don't worry, its free
> It's only a temporary tax
> Once you get to know it you'll love it

This thing is like Pandora's Box - it just gets better and better and better. Of course this "fee," or as John Roberts like to call it "tax," will be passed onto workers and will also add more pressure - along with a shoddy economy, higher taxes, and more regulations - not to hire. In fact, this notion is already being echoed in the small business community.

The National Federation of Independent Business just released its optimism survey and it's nothing short of a disaster. The headline plunged to reading of 87.5 from 93.1 dragged lower by worries that the next six months will be horrendous for small businesses. Most of the respondents don't plan to hire as earnings tumble and economic conditions erode. 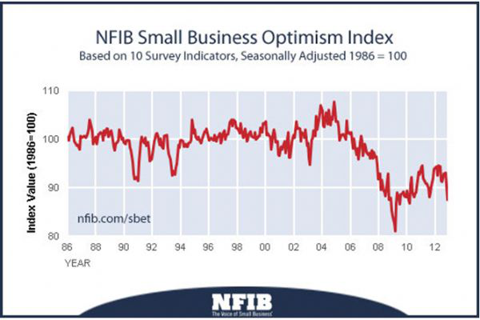 Sadly, just as we are digging through the horrific survey of small businesses, we got word that the deficit increased to $42.2 billion from $40.3 in September, while the gap with China increased to an all-time high. I hear we are supposed to be bringing jobs back from China and yet our exports are surging. In October, exports dipped to $180.5 billion from $187.3 billion the month before.