Rubicon Associates is headed by a Chartered Financial Analyst charter holder with over 20 years of experience in the investment management industry focused on the analysis, investment and management of fixed income and preferred stock portfolios. Over the years, he has analyzed and invested in both public and private companies around the world as well as advised institutional clients on fixed income strategies and manager selection. The principal has been responsible for managing nearly seven billion dollars in credit investments across the capital structure and overseeing the research and trading of credit market activities. Rubicon Associates has written for Seeking Alpha, Learn Bonds, a newsletter and TheStreet.com in addition to advising institutional and private investors.

I should have an opinion piece on Uniti (UNIT)/Windstream (WIN) out today on the importance of the verdict and the greater good - if it isn't published as an article, I will blog post it.

Update on Navios Maritime (NM) preferred tender:  Navios Holdings Extended Time Period Under Exchange Offer and Waived Minimum Condition The Company has extended the expiration date of its exchange offer and consent solicitation (the “Exchange Offer”) to exchange cash and/or newly issued 9.75% Senior Notes due 2024 (the “Notes”) for approximately 66 2/3% of each of the outstanding American Depositary Shares, each representing 1/100th of a share of 8.75% Series G Cumulative Redeemable Perpetual Preferred Stock (the “Series G ADSs”) and 8.625% Series H Cumulative Redeemable Perpetual Preferred Stock (the “Series H ADSs”) through 5:00 pm on Friday, March 1, 2019 whereby the Company has offered to exchange:

The Company is waiving the following condition to the Exchange Offer:

What a long, strange trip it's been: 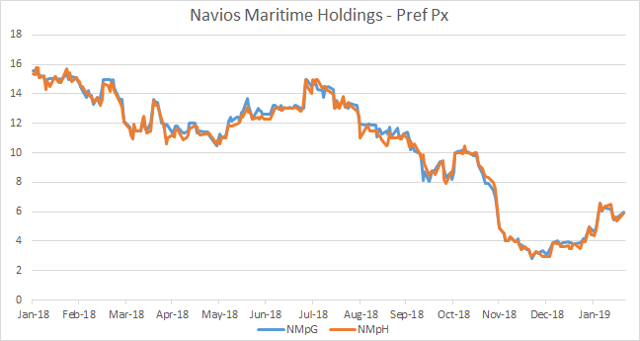 This could be interesting:

Say what you want about Washington Prime (WPG), but I like Lou's sense of humor.  From their release on Grand Central Mall in West VA:  Conforti added: “While delving into the history of Parkersburg, I discovered a little known fact regarding one of its first settlers, Harman Blennerhassett. Seems like Mr. Blennerhassett and Aaron Burr (who also happened to kill Alexander Hamilton during a pistol duel), conspired to have the then westernmost section of the United States secede and become a separate nation. Upon further research, it also came to my attention when the federal government caught wind of this rebellion, both men escaped by disguising themselves as women with an array of cosmetics from Ulta Beauty; separates from the Moschino x H&M Collection; and outran their pursuers by lacing up their Nike Air VaporMax purchased from Hibbett Sports. Word on the street is Lin-Manuel Miranda is seriously considering a Broadway musical to memorialize this little known historical tidbit.”

It was only a matter of time.  CDS determination committee asked if Windstream (WIN) has experienced a credit event

CyrusOne (CONE) - funny feeling tomorrow is not going to be kind:

Still bulletproof on the debt side:

Shares are unch'd after hours.