Jay Norris is a 20-year CBOT floor veteran, author of the Best Seller "Mastering the Currency Market", McGraw-Hill, 2009, and "Mastering Trade Selection and Management", McGraw-Hill, 2011. He is a Market Analyst and Director of Education at Trading-U.com where he teaches the art of discretionary trading. He can be reached at jnorris@trading-u.com.

Over the course of any bear market the occasional short squeeze is expected. A "short squeeze" is when a market that is in a long-term down-trend turns higher and trades thru that price point where the majority of short-term traders have sold at. As price continues higher it "squeezes" the weaker short-position holders out of their positions. And just as predictable is the howling from the squeeze victims of unfair play and outright manipulation on behalf of "quants" or "hedge funds" or even "central bankers". Of course this is kind of silly because when it comes to free markets there really are no rules limiting who can buy or sell or how much, because, they're free. Of course central bankers are trying to game hedge funds who are in turn trying to trim black boxes, prop and retail traders.

The Euro however, has seen an abnormally large amount of short-squeezes for a bear market. Today's latest squeeze occurred in not just the euro but in U.S. stock indices following today's U.S. Federal Open Market Committee statement and press conference. The knee-jerk reaction was lower as bears who didn't want to miss any sell-off increase short bets, only to have price find support, turn higher, and start the familiar squeeze pattern with price grinding higher - see chart. 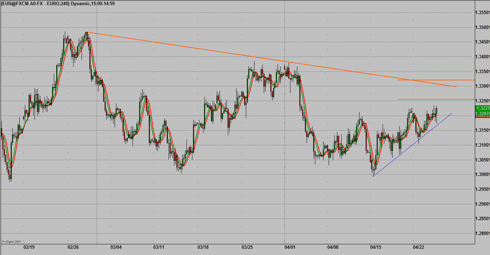 Traders in-step with the current "squeeze play" pattern are likely in a good position to set up shorts at resistance above between approximately 132.50 up to 133.25. Seeing how market price behaves in the context of fundamental developments and current price pattern validates one of the tenets we teach at IBUniversity.com, which is look to sell following rallies in a downtrend. For all the short squeezes in the Euro over the last year, it is still a bear.

Trading involves substantial risk of loss and is not suitable for all investors!