Relationships change, behavior does not. Last year's best girl becomes this summer's "ex" and countless parents will comfort countless teenagers through countless break-ups. It's just the nature of relationships; they change. As any real player will tell you he/she who loves less wins. In the case of gold, her suitors have always been too enamored with her. Over the past several years I've seen perfectly rational men change their entire career paths after being seduced by her. They'll argue with you walking way that she's going to take them to $3,000, or $5,000, even $10,000…and that you're a fool to not see gold is the only true asset class market, when even a first year econ student knows it's not (gold does not produce a yield or a dividend, and it has a carry cost, not a carry yield). Love is blind, but the analysts aren't. The relationship between precious metals and blue-chip stocks is over.

And like any emotional break-up the writing on the wall was there ahead of time. In this case the snub was clear as a tear in late 2011 when stocks recovered and gold corrected. But who can blame a man for missing that tell, after that powerful climax in the late summer of that year. And yet again there was more writing on the wall in the spring of this year, when stocks went on to post a new high of the move, while gold did not - see chart below. 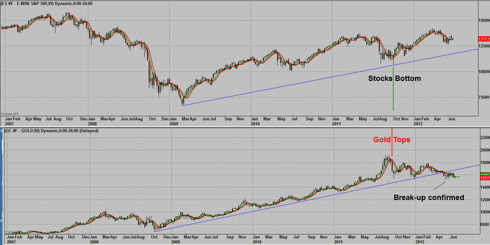 For many having gold as a mistress was better than marrying money. And she was in 2009 and 2010 and 2011! What a run. And even when plenty of humble analysts pointed out her allure came from quantitative easing, which was a temporary occurrence from a historic perspective, her lovers argued "No!"

Attachment and the addiction it leads to has killed more investors than cigarettes and booze combined. Many professionals tell us it's actually a disease - and I can believe that. So when your neighbor or co-worker insists on telling you that a shiny metal coin or ingot, which they pay to keep in a lock box in a bank, is one day going to be worth more than 100 lot blocks of shares in dividend yielding multinational companies in the Dow Jones Industrial Average, of the S&P 500, be more understanding of them, because they are still far too emotional to understand what every poet knows and Lord Tennyson put so eloquently: "Tis better to have loved and lost then never to have loved at all…"