Our Real Estate Daily Recap discusses the notable news and events in the real estate sector over the last trading day and highlights sector-by-sector performance. We publish this note every afternoon at HoyaCapital.com and, by reader demand, occasionally on Seeking Alpha to cover significant news. Subscribe to our free mailing list to make sure you never miss the latest developments in the commercial and residential real estate sectors. You can also follow our real-time commentary on Twitter and LinkedIn. U.S. equity markets gained for the fourth day in the past five on Friday, ending the week higher by more than 4% despite another slate of brutal unemployment data this morning. Ending the week higher by 3.4%, the S&P 500 ETF (SPY) finished higher by 1.7% while the Dow Jones Industrial Average (DIA) gained another 450 points following yesterday's 210 points rally. Real estate equities rallied for the second-straight day following a furious slate of generally better-than-expected earnings as rent collection metrics have been solid. Climbing into positive territory for the week, the broad-based Equity REIT ETFs (VNQ) (SCHH) gained 2.4% with 16 of the 18 sectors in positive territory while Mortgage REITs (REM) gained 2.4%. 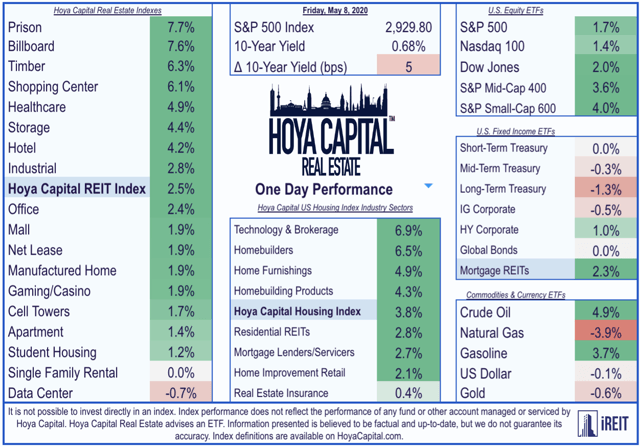 Today's gains came despite a historical nonfarm payrolls report this morning. Erasing a decade's worth of job growth, 20.5 million workers lost their jobs - at least temporarily - in April amid the coronavirus-related economic shutdowns as the unemployment rate surged to a record 14.7%. Investors are looking ahead to eventual recovery, however, supported by unprecedented levels of fiscal and monetary support. All 11 GICS industry groups were higher on the day, led by another strong day from the homebuilders and the broader Hoya Capital Housing Index after earnings commentary from Zillow (Z) noting "evidence of the housing market’s resilience and an encouraging readiness, perhaps pent-up restlessness...  and a full rebound in shopping activity, which has returned to double-digit year-over-year growth." 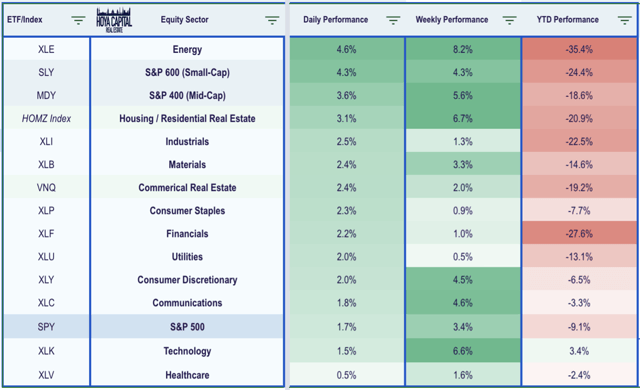 Yesterday, we published Who Paid The Rent? Earnings Halftime Report. We've now passed the halfway point of the most newsworthy and consequential REIT earnings season in a decade. Rent collection and dividend plans have been the primary focus of investors. Rent collection has been largely a non-issue for residential, industrial, and office REITs, as each sector has collected over 90% of April rents. For retailers, if you're not essential, you're not probably paying the rent. We have a full breakdown of all of the REIT earnings results below including the summary of our real-time rent collection tracker exclusive to iREIT on Alpha premium subscribers. 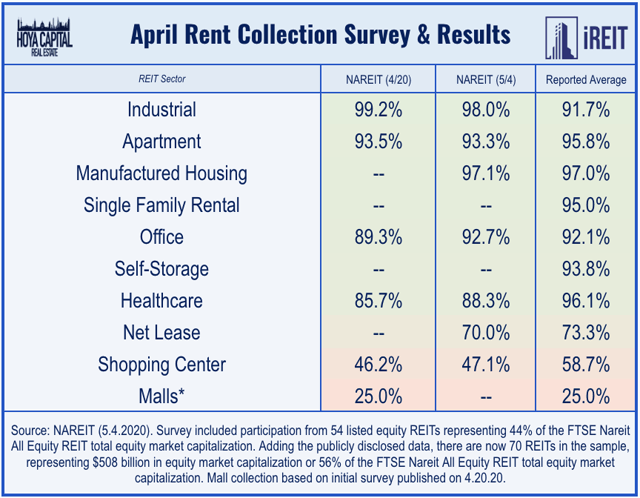 Four more REITs were added to the Coronavirus Dividend Cut list today: New Senior (SNR), Sunstone Hotels (SHO), Outfront (OUT), and Kimco (KIM). We've now tracked 41 equity REITs in our universe of 165 names to announce a cut or suspension of their dividends in addition to the majority of mortgage REITs that have announced dividend cuts or suspensions. 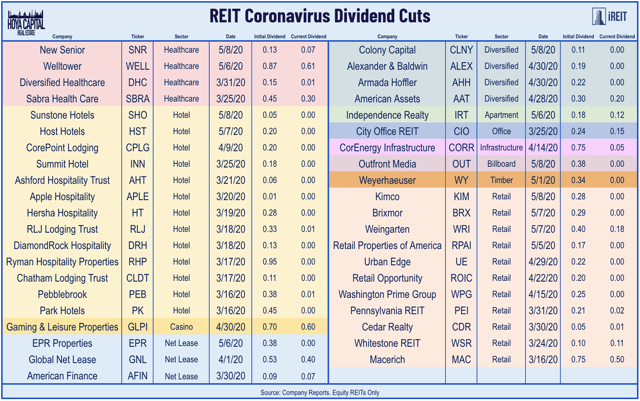 Healthcare: Ventas (VTR) surged 11.1% after reporting this morning, noting solid same-store metrics in the first quarter and noted that it received substantially all rent due in April from its triple-net healthcare tenants and 96% of anticipated rent from its office portfolio tenants. New Senior (SNR) gained 3.6% after reporting results this morning in which it withdrew full-year guidance and did not provide a specific rent collection metric. SNR also announced a 50% reduction in its quarterly dividend. CareTrust (CTRE) surged 1.9% after it announced yesterday after the close that it collected 99.3% of rent in April. 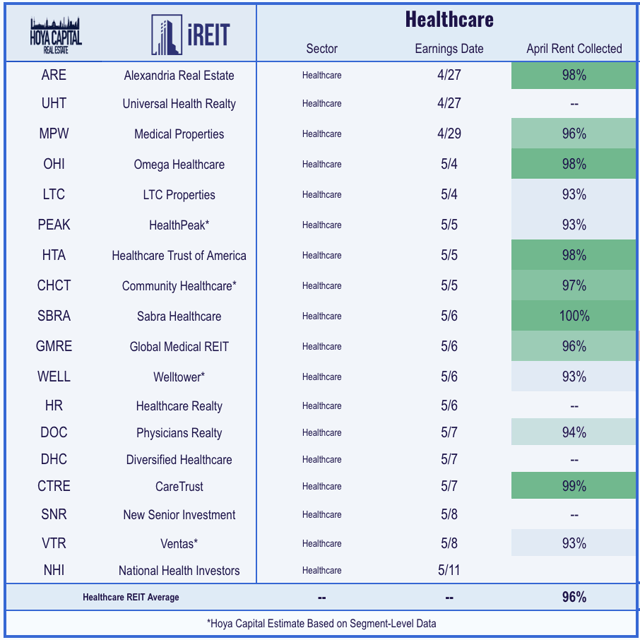 Malls: Brookfield Properties (BPYU) gained 5.2% after it announced this morning that it collected roughly 20% of their retail rents but 90% of rents from their multifamily and office portfolios. Washington Prime (WPG) gained 1.0% after announcing yesterday afternoon that it collected 30% of contractual base rent for April which was comprised of a 25% collection rate for enclosed mall properties and 50% for Open Air properties. 57% of the Company’s assets have remained fully or partially open. WPG had previously eliminated its dividend back in April. 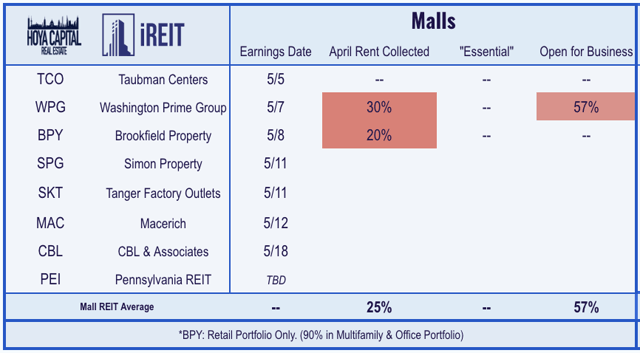 Hotels: Sunstone Hotels (SHO) fell by 2.3% after announcing earnings results this morning in which the firm reported occupancy of just 2% in April. For the quarter, occupancy dipped 18.8 percentage points to 60.1% while Revenue Per Available Room (RevPAR) declined by 25.7%. Pebblebrook (PEB) finished higher by 4.2% after it announced yesterday after the close that it recorded occupancy of 56.7% in Q1 with RevPAR declines of 24.0% but did not provide occupancy metrics for April. PEB had previously suspended its dividend in March. Host Hotels (HST) gained 0.1% after it announced yesterday afternoon that it recorded 58.9% occupancy with RevPar declines of 21.0% and announced a suspension of their dividend. HST, the only REIT so far to report both March and April metrics, saw 29% occupancy in March and 12% occupancy in April. 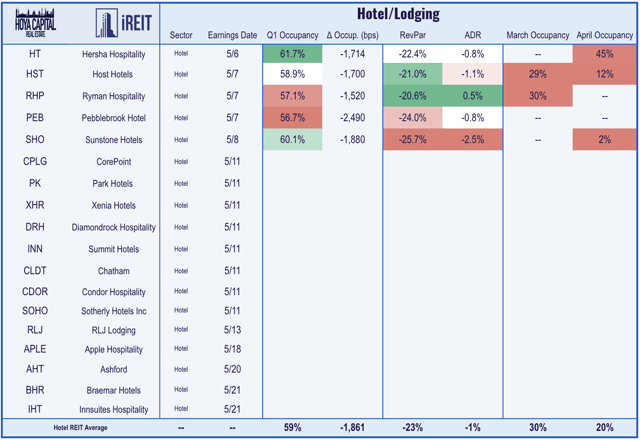 Shopping Centers: Kimco Realty (KIM) gained 8.5% today despite suspending its dividend this morning and reporting 60% rent collection in April while 56% of their tenants are currently open and operational. Whitestone REIT (WSR) gained 0.3% today after it reported yesterday afternoon that it has collected 64% of April rents and 40% of May rents thus far, but also reduced its dividend for the second time since the start of the pandemic. Weingarten (WRI) gained 6.1% today after it reported 64% rent collection in April and that 62% of its businesses are classified as "essential." WRI reduced its dividend to $0.18 from $0.40 per share. Regency Centers (REG) gained 7.3% today after it reported that it collected 62% of April rents, equal to the percentage of tenants that are classified as "essential business." Brixmor (BRX) gained 5.2% after it announced that it collected 66% of April rents, also generally consistent with the 59% of tenants that are "essential" and the 64% that are currently open for business. BRX eliminated its dividend. 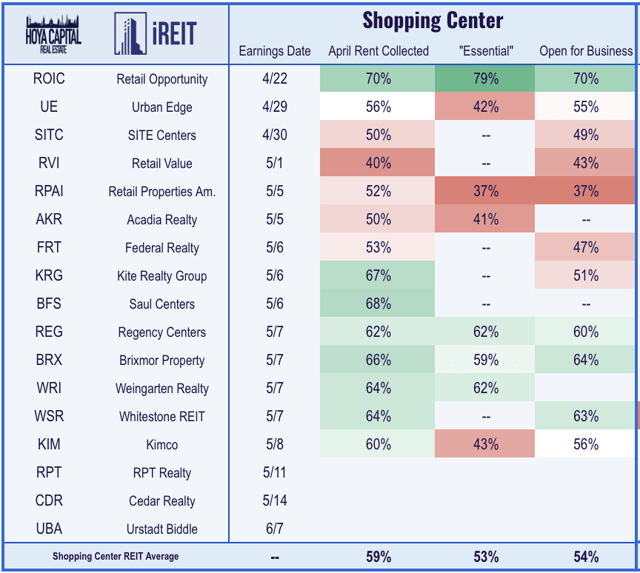 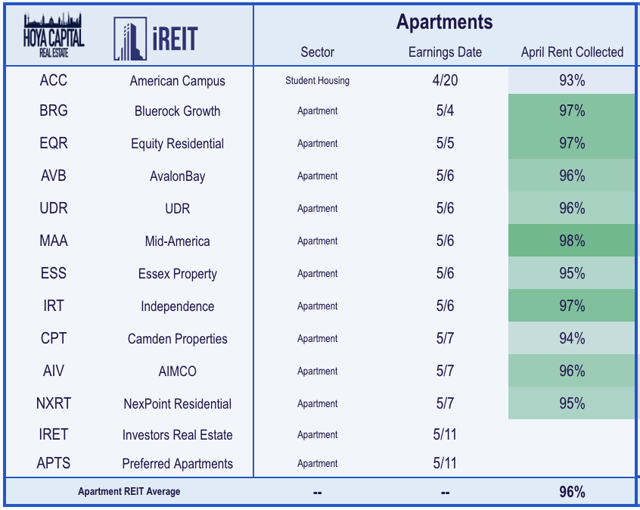 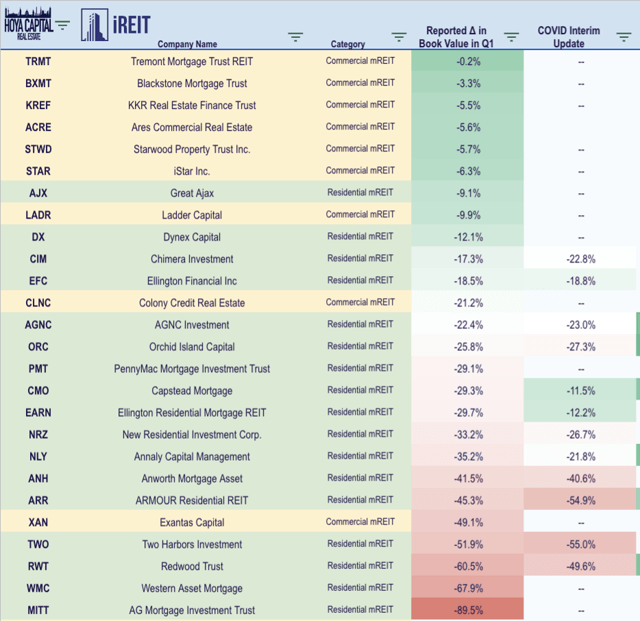 We'll have a full analysis of this week's economic data in our Real Estate Weekly Outlook report published tomorrow morning. 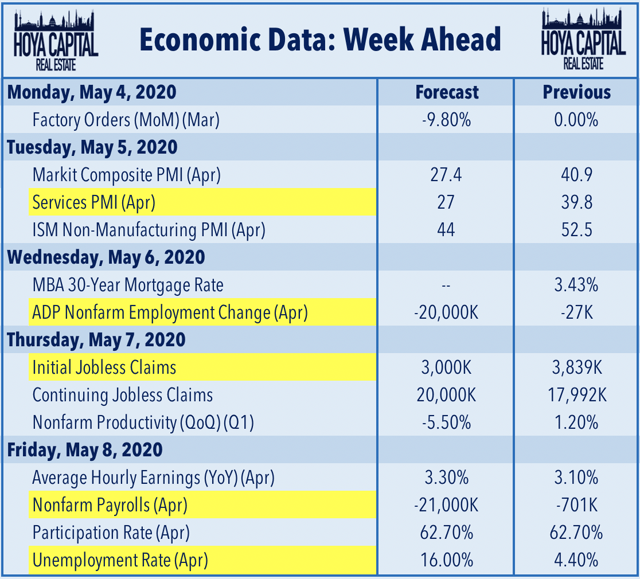 Visit our website and join our email list for free access to our full real estate research library: HoyaCapital.com where we have quick links all of our real estate sector reports and daily recaps. You can also follow our real-time commentary on Twitter and LinkedIn. 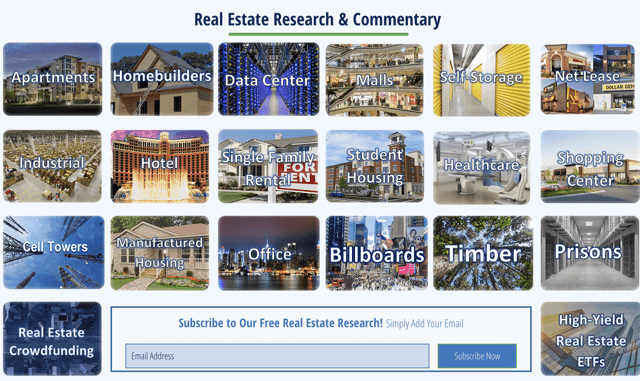 Disclosure: Hoya Capital Real Estate advises an Exchange Traded Fund listed on the NYSE. In addition to any long positions listed below, Hoya Capital is long all components in the Hoya Capital Housing 100 Index. A complete list of holdings and Real Estate and Housing Index definitions and holdings are available at HoyaCapital.com. 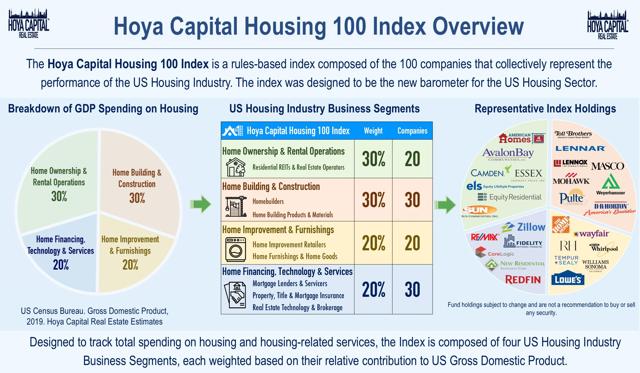 Additional Disclosure: It is not possible to invest directly in an index. Index performance cited in this commentary does not reflect the performance of any fund or other account managed or serviced by Hoya Capital Real Estate. Data quoted represents past performance, which is no guarantee of future results. Information presented is believed to be factual and up-to-date, but we do not guarantee its accuracy.

Hoya Capital Teams Up With iREIT

Hoya Capital is excited to announce that we’ve teamed up with iREIT to cultivate the premier institutional-quality real estate research service on Seeking Alpha! Sign up today and receive a free two-week trial! 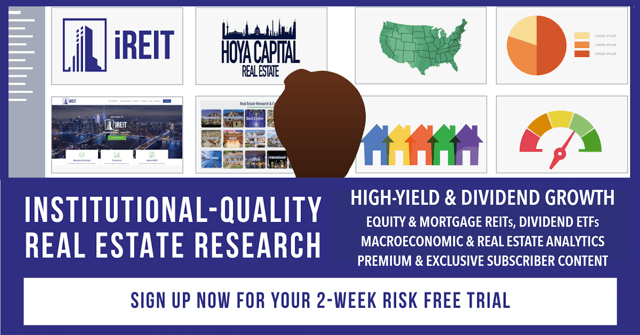 Disclosure: I am/we are long HOLDINGS LISTED AT WWW.HOYACAPITAL.COM.