Gary Townsend - Founding member and Chairman, GBT Capital Management, LLC, a macro long/short fund based in Chevy Chase, Maryland. Also, 2007-2013, a founding partner, CEO and Portfolio Manager of Hill-Townsend Capital LLC, a long/short equity financial sector fund. Mr. Townsend has 35 years banking, regulatory, and investment experience. He started his business career in 1978, as a consultant and advisor on anti-dumping trade issues primarily to foreign manufacturers based in Asia. In 1982, he began a 15 year career as a U.S. government banking regulator. In 1990, he was recruited to build out a new, independent federal regulatory agency, the Federal Housing Finance Board, regulator of the Federal Home Loan Bank System. As Chief Examiner and Director of Supervision and Examination, Mr. Townsend organized and implemented supervisory examinations of the 12 FHLBanks and Office of Finance with particular emphasis on their funding activities, use of derivatives, safety and soundness and regulatory compliance. In 1998, Townsend joined FBR Capital Markets as a sell-side analyst, applying his banking and regulatory experience to the investment analysis of commercial banks of all market capitalizations. In 2007, Forbes.com named him as "Best Brokerage Analyst" for commercial banks; also Starmine ranked him the #2 earnings estimator (out of 109 analysts) and in the top 10% of analysts for stock picking and earnings accuracy. Townsend left FBR in November 2007 to launch Hill-Townsend Capital LLC. He holds a CPA designation (1999) and a MBA from George Washington University (1979).
This morning.  Pressured by 3 consecutive days’ distributions, U.S. equity markets are again in correction. Despite diminished prospects for quick approval of increased U.S. debt capacity, bond market reaction remains muted, even as volatility has risen substantially in world equities markets. In Asia, equity markets closed mixed, on mixed volume.  For a 3rd day, European equity indexes are moderately lower.  U.S. equity futures are modestly higher, helped by a better-than-expected initial jobs claims number for the latest week. Generally, corporate earnings continue to surprise positively.  U.S. Treasury prices are slightly higher.  The U.S. dollar is slightly stronger. Commodities markets are mixed.  Equity options markets suggest increased market pessimism.  After a fair value adjustment of +2.04 points, September SPX equity futures are at 1304.60, up +3.66 points.  The SPX opens at 1304.89,  -4.31% below its recent April 29 multi-year closing high, and +1.66% and -0.44% below its respective 20- and 50-day moving averages.  The SPX is +3.76% above its 1257.64 year-end close.  Next resistance is at 1303.49.  Next support is at 1294.95. 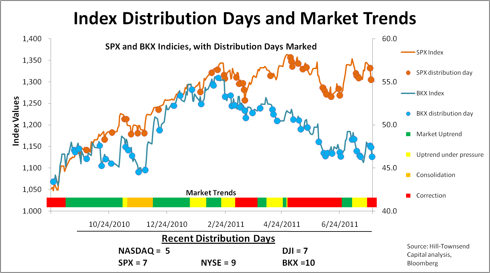